Results: To identify mechanisms of acquired resistance, longitudinal bulk DNA-seq was analyzed for 22/23 pts, including 5 pts with available samples at relapse or disease progression (3 CR and 1 MLFS with morphological relapse; 1 CRh with disease progression). Mutations not detected at baseline but emerging during therapy were categorized into canonical biological pathways (Table). Emerging mutations were observed in 9/22 (41%) pts, including 4 with multiple mutations. 3/22 (14%) pts had emerging IDH2 mutations, with concurrent rise in plasma 2-hydroxyglutarate (2-HG) levels. Within the relapse/progression cases, emerging mutations were observed in 4/5 pts, including 3 where the emerging mutation appeared to be the predominant mutation at relapse/progression (2 CR pts with IDH2 mutations, and 1 CRh pt with a TET2 mutation). To date, from the bulk DNA-seq analysis, no emergence of an IDH1 second-site or receptor tyrosine kinase pathway (FLT3, KRAS, NRAS, PTPN11) mutation has been observed. To further evaluate clonal evolution of clinical response and disease progression, scDNA-seq was performed, with data available for 15 pts (10 CR, 2 CRh, 1 MLFS, and 2 stable disease), including end-of-study time points for 5 relapse/progression pts. In the 2 relapsed pts with an emerging IDH2 mutation observed by bulk DNA-seq, 1 had a minor IDH2 clone present at baseline that expanded independently from IDH1 during therapy (Fig). In a separate case, a subclonal baseline PTPN11 clone evolved to gain both RUNX1 and IDH2 mutations, becoming the predominant clone at relapse. In 2 other cases, scDNA-seq data showed that non-IDH1 clones were selected from baseline clones ancestral (TP53 n = 1) to or emerged separate from mIDH1 (TET2 n = 1). Clonal architecture and evolution from additional pts will be presented.

Conclusion: IVO + AZA combination treatment in IC-ineligible ND AML led to deep and durable molecular remissions. Although the dataset is small, IDH2 clones appeared to expand or emerge separate from the IDH1 clone, with no observation of an IDH1 second-site mutation to date. Understanding patterns of emerging mutations/pathways at relapse will allow for comparison with mIDH1 R/R AML and ND AML pts treated with IVO monotherapy. These results underline the importance of mutational testing, particularly at progression to determine optimal salvage therapy. Potential combination or sequential therapies should be evaluated prospectively in future clinical trials. 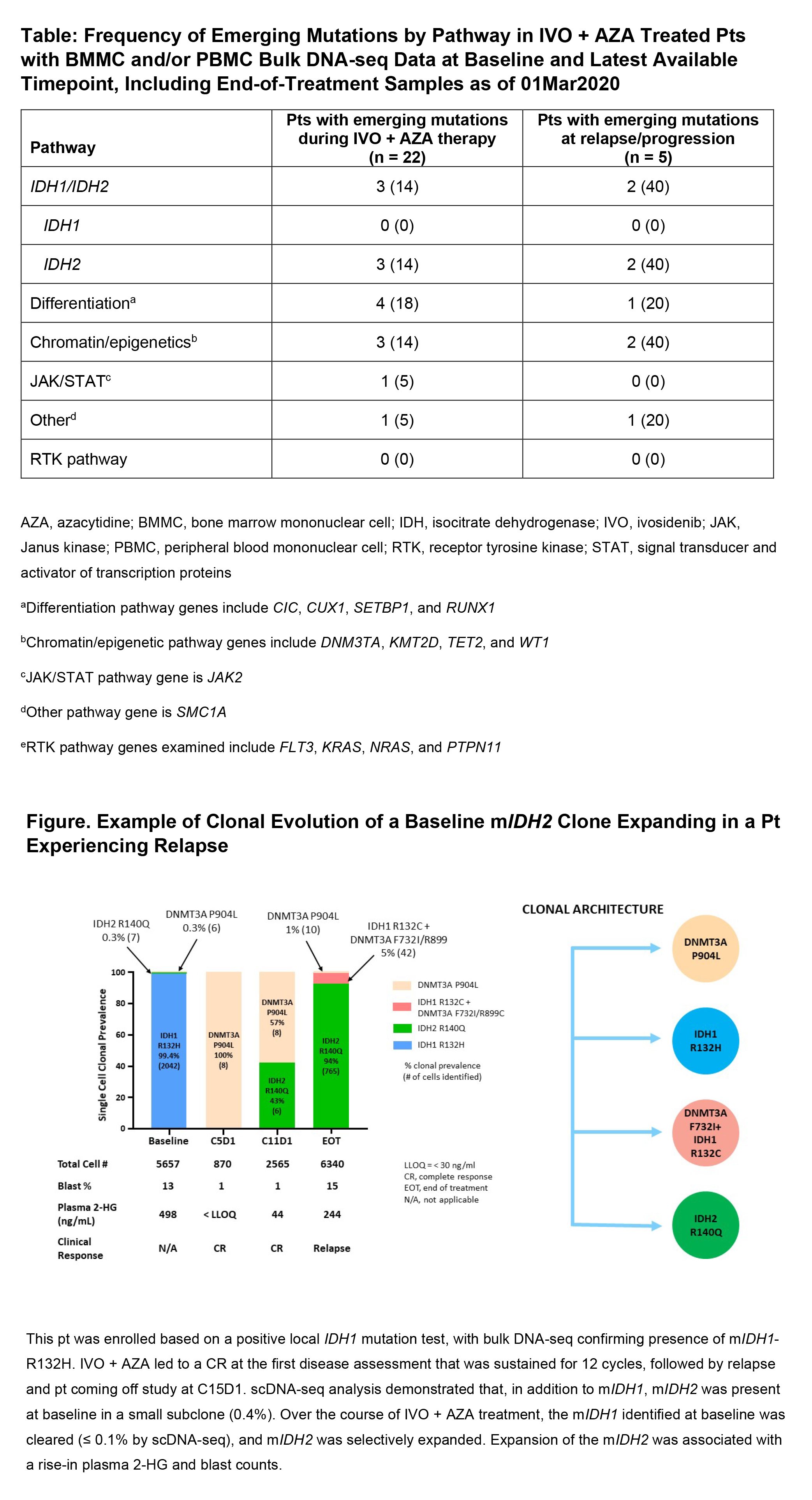