Recent randomized trials have demonstrated improvements in overall survival (OS) for the BCL-2 inhibitor venetoclax (VEN) in combination with azacitidine and low dose cytarabine in older unfit patients with AML. Pre-clinical studies identified BAX deficiency as a potential mechanism of VEN resistance in AML, but this has not been observed in patients to date (Chen, Cancer Disc 2019).

We used targeted sequencing to assess BAX among 44 patients relapsing after attaining initial remission on VEN-containing regimens for AML. BAX variants at relapse were identified in 6 patients (13.6%), with a variant allelic frequency (VAF) of 0.75% – 48% (Fig A). This included missense, frameshift (fs), nonsense and splice site mutations (Fig A). One variant, P168A, residing in the linker region prior to the α9 helix is known to reduce BAX translocation and activity. The emergence of BAX mutations at AML progression implicated its role in adaptive resistance (Fig B). In contrast, no BAX mutations were identified in a control cohort of 35 patients with AML relapsing after conventional chemotherapy (Fig A).

To explore mechanisms of acquired resistance to BH3 mimetics, OCI-AML3 cells were exposed to increasing concentrations of BCL-2 and MCL1 inhibitors over 3-months. Acquired resistance (OCI-AML3-R) was associated with loss of BAX expression, with no changes observed in other BCL-2 family members (Fig C). In contrast, BAX expression was preserved in OCI-AML3 cells exposed to similar concentrations of DMSO (OCI-AML3 DMSO). Targeted BAX NGS revealed a BAX E41Gfs variant in exon 3 at baseline (VAF 46%). In OCI-AML3-R cells, this variant was detected at a VAF of 86%, with no copy number change detected on sequencing-based copy number assessment, consistent with development of loss of heterozygosity in OCI-AML3-R cells. OCI-AML3-R cells were also cross-resistant to an MCL1 inhibitor (S63845), combination of VEN with S63845 or triple combination with VEN, S63845 and a BCL-X inhibitor A1155463 (not shown). In a xenograft model of AML, cohorts transplanted with OCI-AML-R cells lacking wildtype BAX displayed reduced survival compared to mice transplanted with OCI-AML3-DMSO cells after combined treatment with VEN and S63845 (Fig D). As mitochondrial apoptosis is mediated by pro-apoptotic effectors BAX and BAK, we generated OCI-AML3 cells deficient in BAX or BAK by CRISPR/CAS9 gene editing. Only BAX-/- but not BAK-/- cells were resistant to cell death induced by inhibitors of BCL-2 and MCL1 (not shown). This specificity was confirmed in xenograft models of BAX-/- or BAK-/- AML, which confirmed resistance of BAX deficient cells to combined therapy with VEN and S63845 in vivo (Fig E). Finally, to determine if BAX deficiency confers generalized chemoresistance, a competition assay compared proportions of wildtype BAX expressing and BAX-/- OCI-AML3 cells during a 14-day exposure to either 1) VEN, 2) S63845, 3) combined VEN and S63845 or 4) Ara-C. VEN therapy led to expansion of BAX-/- deficient cells, which was enhanced in combination with S63845. In contrast, treatment with Ara-C depleted BAX-/- cells over 4 days, with death of both BAX and BAX-/- populations seen by day 7 (Fig F).

We identified the presence of BAX mutations in AML samples from patients progressing on VEN-containing regimens. We show that BAX, but not BAK loss in an AML cell line is associated with resistance to BH3-mimetic drug combinations resulting in reduced survival in AML xenograft models. In contrast, BAX deficiency does not impede the cytotoxic actions of conventional chemotherapy. We conclude that selection of BAX deficient cells may represent a novel mechanism of resistance to BH3-mimetics in the treatment of AML and that the emergence of BAX variants should be considered in patients developing adaptive resistance to VEN-based therapies. 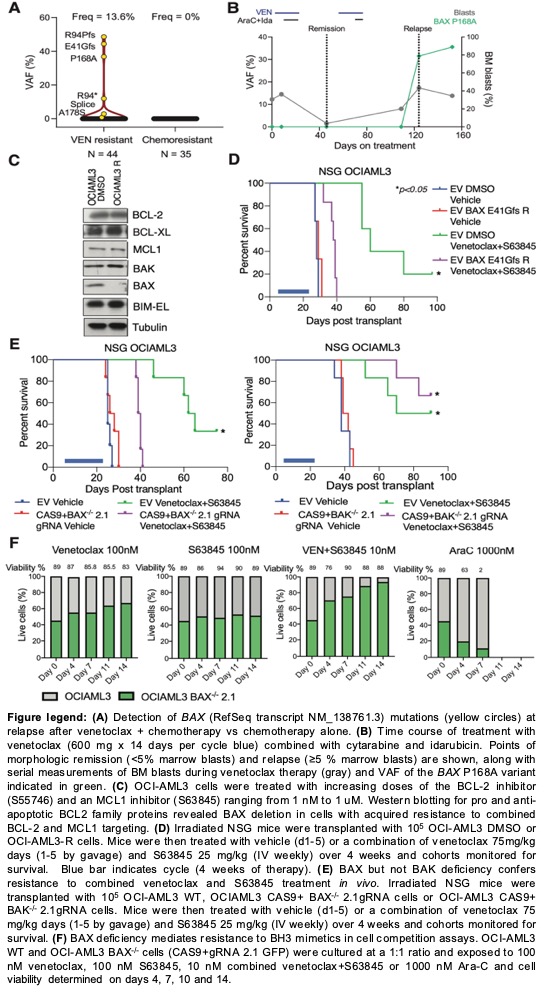