Introduction: Among the most challenging complications of hemophilia A is inhibitor formation. A T-cell dependent B-cell response to exogenous factor VIII (FVIII), inhibitors result in a high burden of disease, with poorly controlled bleeding, twice the hospitalizations, 10-fold the cost, and 3.5-fold the mortality of non-inhibitor patients. Thus, a major goal of hemophilia management is to prevent and eradicate inhibitors. With the availability of novel therapies, including eloctate, a recombinant Fc-fusion protein (rFVIII-Fc) which induces regulatory T cells to promote FVIII tolerance, and emicizumab, a bispecific monoclonal FVIII mimetic, we designed the INHIBIT Clinical Trials Platform (X01HL143024), Fig.1. The platform is composed of two linked randomized phase III trials, the Inhibitor Prevention Trial (NCT04303559), comparing rFVIII-Fc vs emicizumab prophylaxis to prevent inhibitors, and the Inhibitor Eradication Trial (NCT04303572), comparing rFVIII-Fc immune tolerance induction (ITI) plus emicizumab vs rFVIII-Fc ITI alone to eradicate inhibitors. The platform uses adaptive design to incorporate historical data (Bayesian priors) on inhibitor formation to increase power and promote efficient use of rare data. Yet, there is equipoise regarding the optimal approach to inhibitor prevention and eradication, and, as clinical practice is changing, we aimed to test the feasibility of the INHIBIT trial design.

Methods: To establish design feasibility, we conducted interviews with 30 hemophilia treatment center (HTC) physicians participating in the INHIBIT trials, to determine prophylaxis and tolerance regimens they prescribe and perceived barriers to the INHIBIT trials design. A 4-question survey was subsequently emailed to these physicians to ascertain the initial prophylaxis regimens they prescribe in previously untreated patients (PUPs) with severe hemophilia A, and the initial immune tolerance induction (ITI) they prescribe in high-responding inhibitor patients with severe hemophilia A; if new inhibitors had been observed during emicizumab prophylaxis, and willingness to participate in post-trial surveillance.

Results: In interviews, HTC physicians indicated the issues that influenced choice of prophylaxis/ ITI regimen were patient preference, family history of inhibitors, infusion frequency, IV access, port requirement, and family fatigue. In the absence of clinical trials data in PUPs, there was general agreement that emicizumab prophylaxis, with it simpler subcutaneous (SQ) administration, might delay or potentially prevent inhibitors. Survey findings in Table 1 indicated 75% of physicians prescribe extended half-life (EHL) FVIII in a once-weekly prophylaxis regimen, as planned in the Prevention Trial, despite the persistent 27% inhibitor rate (ALong PUPs Trial, Königs et al, ISTH 2020) and potential risks with port use. There was support for the 1:3 preferential randomization to emicizumab in the Prevention Trial due to the simpler SQ route, despite concern it might delay rather than prevent inhibitor formation, although no inhibitors were reported by physician survey with emicizumab use alone. There was also concern that breakthrough bleeds requiring FVIII during emicizumab prophylaxis, might lead to immune activation and inhibitor formation. There was strong agreement, however, in 29 (97%) of physicians to participate in post-trial surveillance for long-term inhibitor outcomes. FVIII ITI was considered essential to eradicate inhibitors, despite the intensity of the infusion regimen. Notably, 60% prescribe emicizumab with FVIII ITI, as planned in the Eradicate Trial, although the every-other-day infusion was considered a potential barrier to participation. Omitting FVIII ITI was not favored due to the risk of inhibitor anamnesis if FVIII treatment was subsequently required for surgery or acute hemorrhages. Despite these concerns, there was agreement to participate in the trials.

Discussion: Physician interviews and surveys confirm there is heterogeneity in current hemophilia clinical practice, specifically in initial prophylaxis regimens and in initial immune tolerance regimens, including agent choice and duration. However, there is physician consensus with the INHIBIT trial aims and with the proposed INHIBIT trial regimens to prevent and eradicate inhibitors. 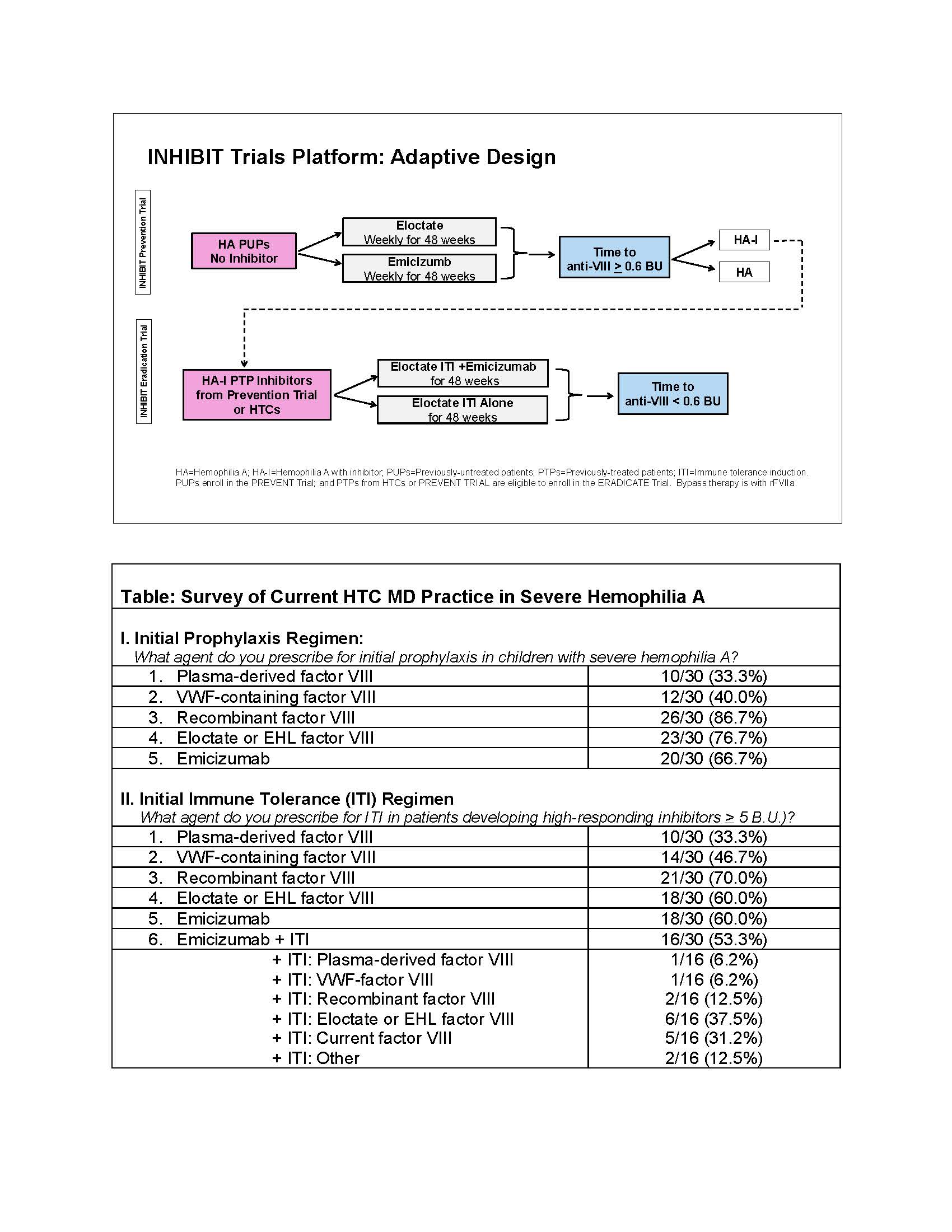 See more of: 322. Disorders of Coagulation or Fibrinolysis: Poster I
See more of: Oral and Poster Abstracts
<< Previous Abstract | Next Abstract >>
*signifies non-member of ASH