Introduction: Soluble Urokinase-Type Plasminogen Activator Receptor (suPAR) is the circulating form of a glycosyl-phosphatidylinositol–anchored three-domain membrane protein. suPAR is expressed on a variety of cells, including immunologically active cells, endothelial cells, and renal podocytes. Both the circulating and membrane-bound forms are directly involved in the regulation of cell adhesion and migration through binding of integrins. Elevated suPAR levels have been associated with poor outcomes in various conditions. suPAR has been implicated in the pathogenesis of kidney disease, specifically Focal Segmental Glomerulosclerosis and Diabetic Nephropathy, through interference with podocyte migration and apoptosis. Elevated plasma suPAR levels were associated with incident Chronic Kidney Disease (CKD) and a more rapid decline in the eGFR in persons with normal kidney function at baseline, and with acute kidney injury in various clinical and experimental contexts. suPAR was a strong and independent predictor of mortality in patients with Chronic Heart Failure (CHF), in a recent study. In patients with AL amyloidosis renal involvement is very common and is associated with a high risk of progression to End Stage Renal Disease (ESRD). Evaluation of renal response is challenging and prognostication is based mainly in serum creatinine and proteinuria; limited data exist about new renal biomarkers. Thus, we evaluated suPAR, as a potential new biomarker for renal outcomes in patients with AL amyloidosis treated with contemporary therapies.

Methods: we measured serum suPAR levels in 136 patients with AL amyloidosis, before start of therapy and at 6 months in 98 of them. Serum suPAR levels were determined using a standard commercial enzyme-linked immunosorbent assay (suPARnostic Standard kit; ViroGates A/S, Birkerød, Denmark).

Results: The median age was 65, 56% were males, 72% had renal, 71% heart, and 17% liver involvement; Mayo stage disposition was 15%, 56% and 29% and renal stage disposition 39%, 44% and 17%, respectively; 82% received bortezomib-based therapy. Median baseline suPAR levels were 6.6 ng/mL (range 2.7-29.0 ng/mL), which is significantly higher than in other studies in non-amyloidosis patients with CKD or CAD/CHF (median 3.04-3.7 ng/ml). We observed a weak negative correlation of suPAR levels with eGFR, but there was no correlation with proteinuria or serum albumin levels in patients with AL amyloidosis and was not associated with renal stage (as defined by eGFR<50 ml/min and proteinuria >5 gr/d). suPAR levels were higher in patients with heart involvement and were associated with NT-proBNP (p=0.003), hs-TnT (p<0.001) and Mayo stage. suPAR levels were higher among those with liver involvement and strongly correlated with alkaline phosphatase levels (p<0.001). There was also a positive correlation with involved Free Light Chain (iFLC). At 6 months suPAR levels were 6.1 ng/mL and in pairwise comparison this reduction was marginally significant (p=0.039); however, this reduction was independent of baseline level and of hematologic response.

Conclusion: in patients with AL amyloidosis suPAR levels are prognostic of renal outcomes, especially with progression to ESRD requiring dialysis. Most importantly, suPAR levels and their changes were independently associated with renal progression and progression to dialysis either when measured before start of therapy or at 6 months, independent of baseline renal stage, renal progression by the Palladini criteria and even of the quality of hematologic response. Further evaluation in larger cohorts is required to evaluate suPAR as a biomarker for renal outcomes in AL amyloidosis. 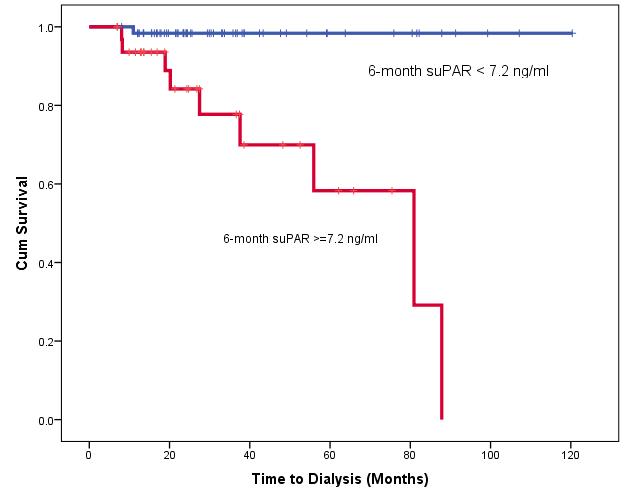