The six-minute walk test (6MWT) is a well-established assessment of the cardiopulmonary function of sickle cell disease (SCD) patients. The test is used for people with SCD who are suspected of having hypoxia or an elevated estimated pulmonary arterial systolic pressure, which increases the risk for early death. Low 6MWT distances are associated with cardiopulmonary compromise. Six-minute walk distance examination has been proposed as a screening test, used in conjunction with plasma levels of brain natriuretic peptide and Doppler-echocardiography, through which to identify high-risk patients. Post-exercise tachycardia or lack of heart rate recovery following a 6MWT has been shown to be a predictor of pulmonary hypertension and mortality in people with pulmonary fibrosis. A rise in blood pressure after exercise is associated with impaired capacity for vasodilation in ischemic heart disease. The prognostic significance of patterns of vital sign change in adult SCD patients completing the 6MWT is currently unknown. In this study, we aimed to assess the distribution and predictors of vital sign change during 6MWT in adult SCD patients and test the association of these changes with patient survival. Data from a multinational observational study of SCD patients (Walk-PhassT), was used to calculate the change in vital signs (heart rate, O2 saturation, systolic blood pressure, diastolic blood pressure, pulse pressure) normalized for walk distance, after a 6MWT. Bivariate and LASSO regression analyses were performed to ascertain the significant predictors of change in each vital sign, in addition to Cox proportional hazard analysis to assess the impact of vital sign change and time to death.

The median age of the 630 adult SCD patients was 37 years. 47% were male, 77% had the HbSS phenotype, and 22 (3.7% of 592 with follow-up data) died during a median time of follow up of 29 months. The most frequent changes in vital signs identified were increases in the heart rate (90%) followed by increases in systolic blood pressure (77%, Table 1b). Bivariate analysis revealed significant but weak positive correlations between tricuspid regurgitation velocity (TRV) and increases in both heart rate (r= 0.08; p<0.05) and systolic blood pressure (r=0.13; p=0.002), as well as decreases in O2 saturation (r=-0.09; p=0.03). Significant positive correlations were also identified between increases in pulse pressure and TRV (r=0.14; p=0.001), left ventricular mass index (r=0.10, p=0.02), and a composite index of hemolysis (r=0.09; p =0.03). Pulse pressure increased more during 6MWT in patients with self-reported pulmonary hypertension than patients without pulmonary hypertension (median 1.6 vs. 1.3 per 100-meter walk, p=0.04); while heart rate increased less (median 3.4 vs. 4.3 per 100-meter walk, p=0.04). LASSO models selected TRV and markers of hemolysis as predictors of O2 desaturation, while higher left ventricular ejection fraction and non-SS genotypes were predictors of lesser O2 desaturation, during the 6MWT. Both older age and higher left ventricular volume were associated with reduction of diastolic blood pressure during 6MWT (Table 1a). In survival analysis, after adjusting for TRV and N-terminal pro-brain natriuretic peptide concentration, any increase in systolic blood pressure during the 6MWT was associated with better survival (hazard ratio=0.3, p=0.019, Table 1b).

These findings support links between changes of vital signs during the 6MWT and established markers of hemolysis and cardiovascular dysfunction in SCD patients. Evidence of a protective effect of increased systolic pressure is a novel finding. This might indicate that the ability to increase systolic pressure during submaximal exercise relates to cardiac output and conveys a physiological advantage for SCD patients. These findings could be used as the basis for future mechanistic studies of exercise effects on cardiovascular function in SCD patients. 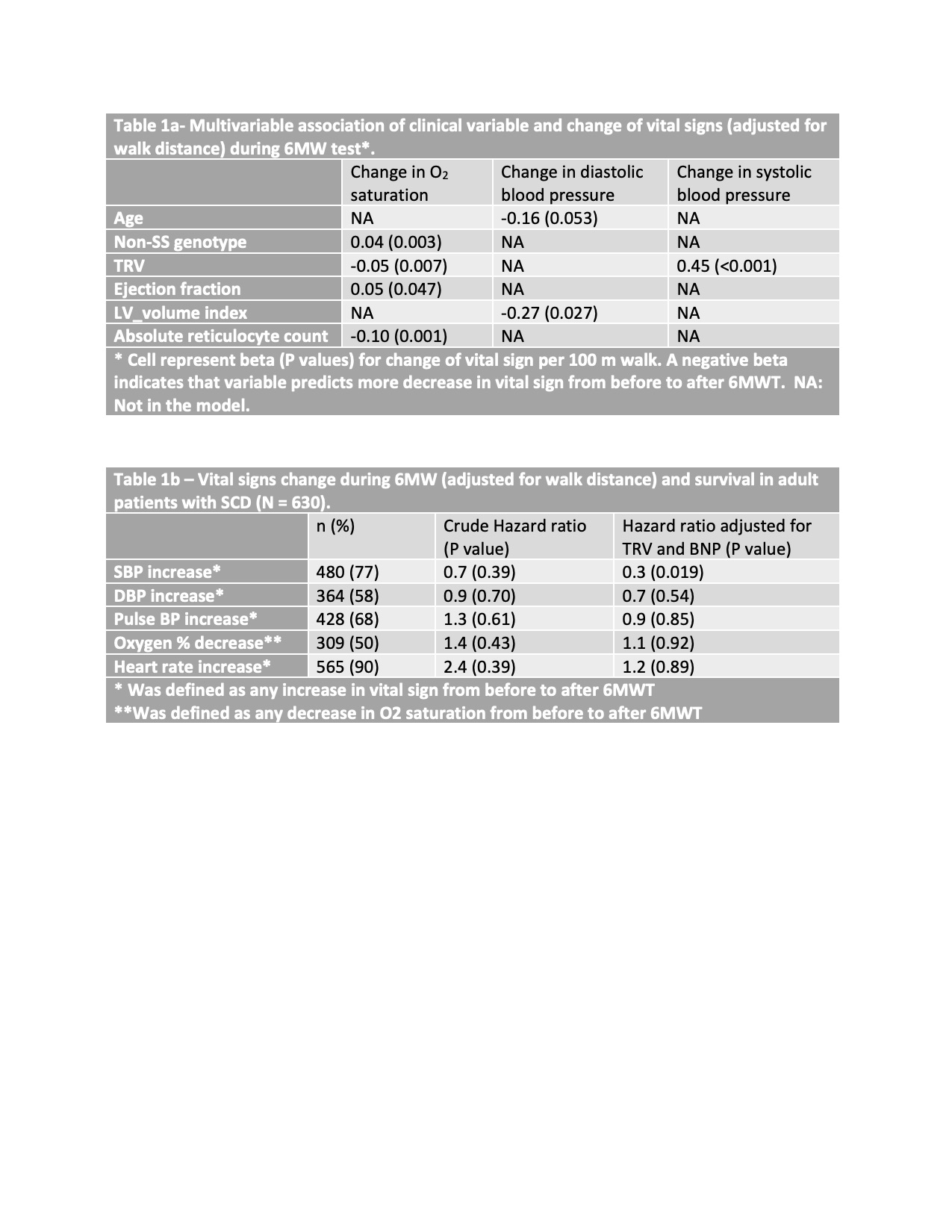