Maintenance therapy improves PFS in NDMM pts. Additional active, well-tolerated treatment options that are suitable for long-term administration are required. The international, multicenter, double-blind, placebo-controlled, phase 3 TOURMALINE-MM4 trial (NCT02312258) of the oral PI ixazomib as maintenance therapy post-induction in non-transplant NDMM pts met its primary endpoint of PFS. Ixazomib demonstrated a significant and clinically meaningful benefit vs placebo, with a manageable and well-tolerated toxicity profile. Feasible, tolerable options for long-term therapy are particularly important in this setting, as pts are often elderly and/or frail. We report herein a subgroup analysis of TOURMALINE-MM4 according to age and frailty status.

Pts who achieved ≥partial response (PR) after 6–12 months of standard-of-care induction therapy were randomized 3:2 to ixazomib or placebo maintenance for up to 24 months. The sum of 4 components – age (<75 vs 75–80 vs >80 years; score 0 vs 1 vs 2), the Katz Index of Independence in Activities of Daily Living (ADL; >4 vs ≤4, score 0 vs 1), the Lawton Instrumental ADL Scale (>5 vs ≤5, score 0 vs 1), and the Charlson Comorbidity Index (≤1 vs ≥2, score 0 vs 1) – was used to classify pts as fit (total score: 0), unfit (score: 1), or frail (score: ≥2). Analyses of the European Organization for Research and Treatment of Cancer Quality of Life Questionnaire Core 30 and MY20 modules were conducted to evaluate the effects of treatment on QoL within subgroups defined by frailty status and age.

Rates of grade ≥3 treatment-emergent adverse events (TEAEs), serious TEAEs, and discontinuation due to TEAEs were higher or similar with ixazomib vs placebo across age and frailty subgroups (Table 2). Rates were generally somewhat higher in older age groups and in unfit/frail pts in both arms; nevertheless, rates of discontinuation due to TEAEs across groups were <20%, even in pts aged ≥75 years and frail pts (Table 2). With ixazomib, rates of common gastrointestinal TEAEs were similar across age groups; rash and liver impairment appeared less common and peripheral neuropathy more common in older pts (Table 2).

Covariate-adjusted changes in QoL subscales from baseline were estimated at each cycle using repeated measures linear mixed models stratified by frailty status. In all frailty groups, the mean changes in each treatment arm were small over time (<10 points on a 0–100 scale) and similar between arms, indicating that continued treatment with ixazomib vs placebo maintenance did not adversely affect pts’ QoL. Analyses by age were generally consistent with the results by frailty.

Ixazomib as post-induction maintenance therapy in non-transplant NDMM pts results in PFS benefits vs placebo regardless of age or frailty status. Ixazomib appeared generally well tolerated across groups, with TEAE rates in both arms generally elevated in elderly/frail vs younger/fit pts. Ixazomib is a feasible and effective maintenance option for prolonging PFS across this heterogeneous pt population. 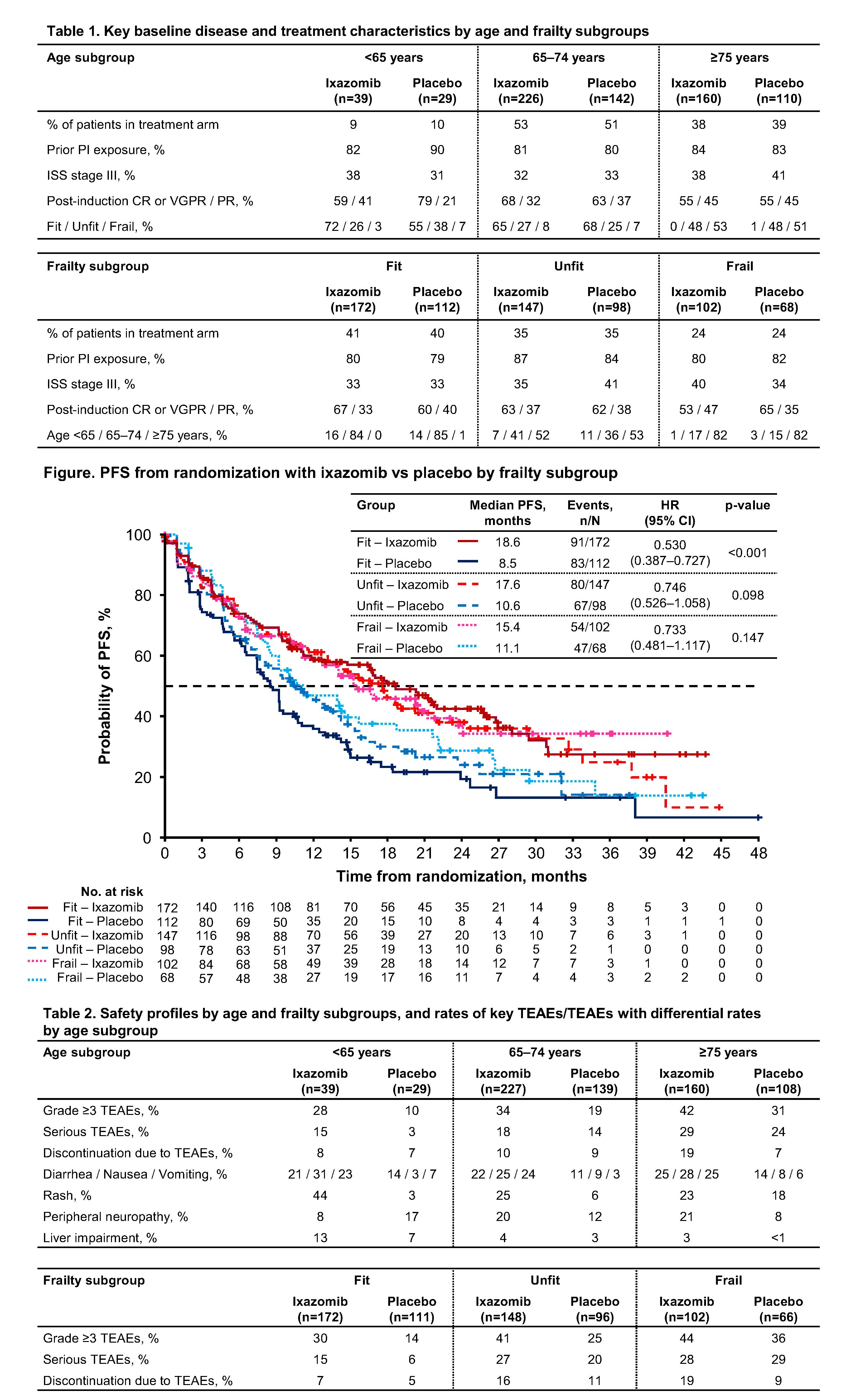