In patients with sickle cell disease (SCD), health-related quality of life (HRQoL) is worse than in the general population and comparable or worse than in patients with other chronic or painful diseases such as cystic fibrosis or cancer. Targeting SCD pathophysiology may significantly improve HRQoL in addition to clinical outcomes. In the ongoing phase 1/2 HGB-206 Study (NCT02140554), which evaluates the safety and efficacy of LentiGlobin for SCD (bb1111) gene therapy (GT), the most recently treated cohort of patients (Group C) have demonstrated improvements in laboratory assessments, including a trend toward normalization in key hemolysis markers and improvements in total hemoglobin values, and near resolution of vaso-occlusive crises and acute chest syndrome (ACS), suggesting a fundamental effect on sickle cell pathophysiology. Patient-reported HRQoL outcomes through 12 months post-treatment are presented here.

Patients (≥12 and ≤50 years of age) with SCD and history of stroke or severe vaso-occlusive events, including acute episodes of pain and ACS, were enrolled. CD34+ cells collected by plerixafor mobilization/apheresis were transduced with BB305 lentiviral vector. LentiGlobin was infused following myeloablative busulfan conditioning. In addition to laboratory and clinical assessments, patients were monitored for patient-reported outcomes (PROs) using the PRO Measurement Information System (PROMIS)-57. PROMIS-57 assesses HRQoL using collection of short forms containing 8 questions for each of the 7 PROMIS domains (Depression, Anxiety, Pain Interference, Fatigue, Sleep Disturbance, in which a lower score denotes improvement, and Physical Function, Satisfaction with Participation in Social Roles, in which a higher score denotes improvement) and a 0–10 Pain Intensity numeric rating scale (NRS). PROMIS-57 has been validated in patients with SCD.

Patients who had baseline scores “worse” than the population norm reported improvements in all domains at Month 6, which were sustained through Month 12. These patients reported clinically meaningful improvement in 6/8 domains; mean T-scores at baseline and Month 12 were 6 and 2.4 for Pain Intensity (n=5); 63 and 48 for Pain Interference (n=7); 62 and 48 for Anxiety (n=3); 62 and 44 for Depression (n=4); 39 and 60 for Satisfaction with Social Roles (n=5); and 40 and 56 for Physical Function (n=4), respectively. Only 1 patient was included in the analysis of Fatigue and Sleep Disturbance domains, thereby limiting the conclusions in these 2 domains (Figure 1).

Patients who had baseline scores that were “better” than or near than the population norm reported clinically meaningful improvements in the Physical Function (n=6) and Fatigue domains (n=9); mean scores at baseline and Month 12 were 49 and 55 for Physical Function and 50 and 43 for Fatigue, respectively. Among patients in this sub-group, Pain Intensity (n=5) and Pain Interference (n=3) scores were stable from Month 6 through Month 12; there was no clinically meaningful change for the Anxiety (n=7) and Depression (n=6) domains, however, worsening was observed in the Satisfaction with Social Role (n=4) and Sleep Disturbance (n=9) domains (Figure 1).

LentiGlobin for SCD GT improved HRQoL in all domains of PROMIS-57 for patients whose baseline scores were “worse” than the population norm, including clinically meaningful improvements in all evaluable (6/8) domains. Larger sample sizes are required to clarify the impact of LentiGlobin for SCD for some PROMIS-57 domains. 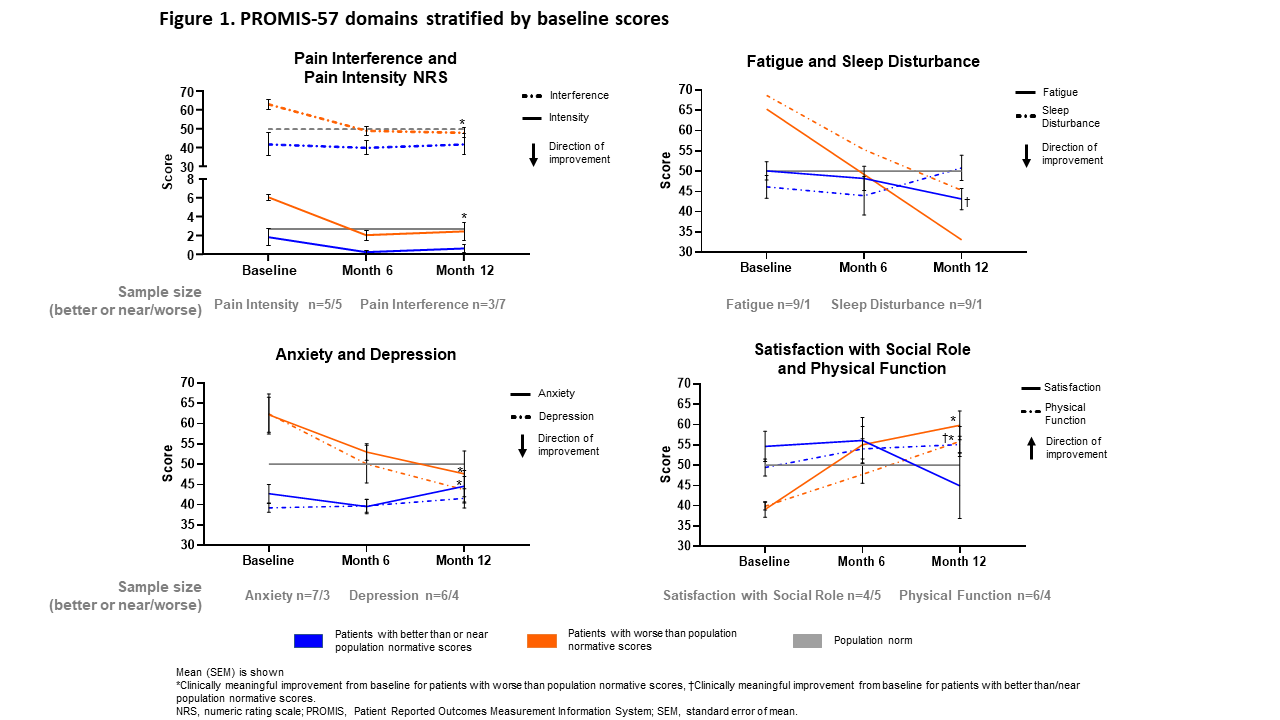