Introduction: Outcomes among pts with AML have improved over the last 20 years with the introduction of novel, targeted, and reformulated chemotherapy agents, as well as the optimization of allogeneic hematopoietic stem cell transplantation (HSCT) strategies. The majority of pts, however, relapse after achieving remission, particularly those who are ineligible for or choose not to proceed to HSCT.

To date, there is limited information available characterizing real-world Tx patterns of therapies offered to pts with AML who achieve complete remission (CR) or CR with incomplete hematologic recovery (CRi) and the subsequent impact on pt outcomes. Therefore, we analyzed data on post-remission therapy, including use of maintenance therapy, in pts with ND AML aged ≥ 55 years from the Connect® MDS/AML Disease Registry (NCT01688011), a large, multicenter, prospective observational cohort study of US pts with AML.

Methods: Demographics, clinical characteristics, and Tx data were collected at the time of enrollment, and every 3 months during follow-up for pts enrolled in the Registry from Dec 2013 to the data cutoff for this analysis of Mar 2020. Pts were categorized as having received first-line therapy (intensive or non-intensive induction) or supportive care (including no Tx), based on medical records provided within 45 days of initial AML diagnosis. For pts achieving CR/CRi following induction, post-remission Tx was defined as: prolonged therapy (ongoing, non-intensive regimen similar to induction, administered until disease progression), consolidation (post-remission intensive chemotherapy), maintenance (non-intensive therapy administered for a prolonged period of time, with agent(s) not used during induction), and HSCT. Overall survival (OS), calculated from the time of CR/CRi, was determined using the Kaplan–Meier method.

Results: As of Mar 2020, 638 pts with AML (median age 71 years; range 55−97) were enrolled in the Registry. The proportion of pts treated at community/government vs academic sites was 59% and 41%, respectively.

Among the 587 evaluable pts, 108 (18%) received HSCT; of these, 81 (75%) proceeded to HSCT after achieving first CR/CRi with induction (77 [95%] received intensive induction, 4 [5%] received non-intensive induction) ± consolidation therapy. The most frequent reasons for transplant ineligibility were age (64%), comorbidities (49%), not achieving remission (30%), and Eastern Cooperative Oncology Group performance status (23%). Median OS was 48.2 months for pts in first CR/CRi who had HSCT vs 21.0 months for pts in first CR/CRi who did not.

Conclusions: Among pts with ND AML in the Connect® MDS/AML Disease Registry who achieved CR/CRi, more received an intensive induction regimen vs a non-intensive regimen. Additional time will be needed to accurately evaluate the impact of novel non-intensive induction regimens (e.g. IDH1/2 inhibitors, venetoclax, FLT3 inhibitors), which have shown improved remission rates and OS outcomes compared with prior low-intensity regimens. Fewer than one third of pts who achieved first CR/CRi following induction ± consolidation proceeded to HSCT, and those transplanted in first CR/CRi showed improved OS vs those without HSCT. These results suggest that real-world practices may tend to select younger, more fit pts with AML as candidates for intensive induction therapy and HSCT. Given that maintenance is not a widely established practice in AML, only 22% of pts in remission received maintenance therapy as a means to improve outcomes. This may change with the approval of novel therapies in the AML maintenance setting, which have the potential to prolong remission, delay relapse, and prolong OS following CR/CRi. 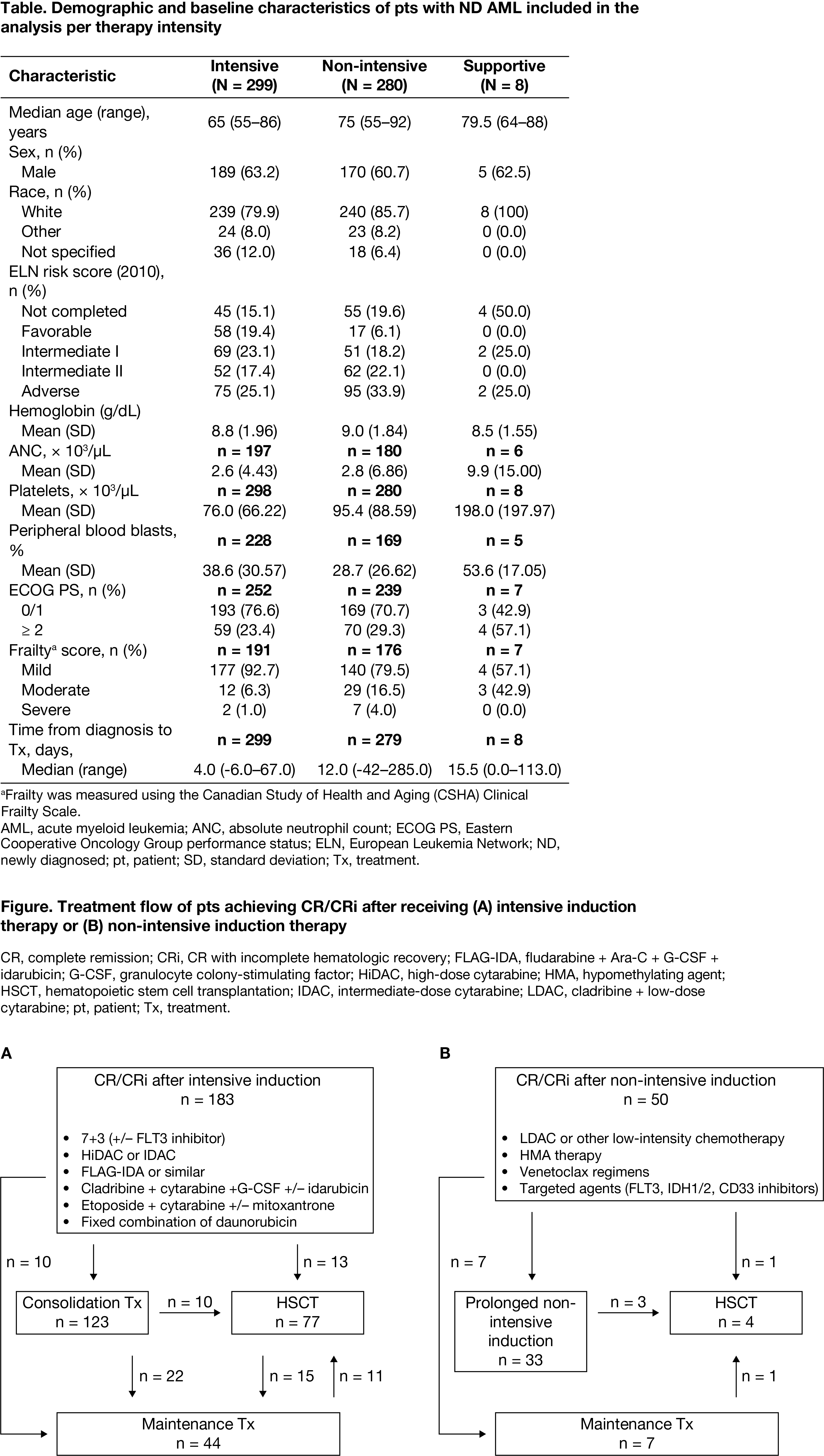