Congenital plasminogen deficiency (C-PLGD) is a rare autosomal recessive multisystem disorder of the fibrinolytic system that is often underdiagnosed. It is caused by mutations in the PLG gene and is characterized by extravascular fibrinous deposits on mucus membranes resulting in tissue injury or organ dysfunction. The abnormal accumulation or growth of fibrin-rich pseudomembranous lesions on mucous membranes, such as the conjunctiva, gingiva, linings of airways and genitourinary tract have been termed ligneous for their “woody” appearance. Ligneous conjunctivitis is the most common manifestation of C-PLGD occurring in greater than 80% of affected patients. Ligneous lesions affecting the female reproductive system have been reported in one large case series in 9% of patients (Shuster et. al. JTH 2007). An extensive review of the literature (Baithun et. al. Haemophilia 2018) identified 30 cases of C-PLGD patients with gynecologic involvement. A diagnosis of infertility, when performed, was reported in 8 (26.7%) of these females of child-bearing age. Due to the rarity of the disease, infertility may be under diagnosed and under reported in the literature as no natural history studies of this disease have been conducted. We report a case of a patient with C-PLGD with a documented diagnosis of infertility who received intravenous plasminogen therapy. Although the protocol stated that adequate contraceptive measures be taken to avoid becoming pregnant during the study, she became pregnant, went to term and had a successful delivery of a healthy child.

She was a 33-year-old woman with a diagnosis of C-PLGD in childhood, after developing ligneous conjunctivitis before the age of 1, developed uterine ligneous lesions and dysmenorrhea as a teenager. At age 27, a hysteroscopy was attempted and laparoscopy was performed which revealed fibrosis and web-like fibrin-rich adhesions in the uterus and fallopian tubes. She was referred to the Oslo University Hospital, Norway, for evaluation and management of her infertility and eye lesions at the age of 28. She was treated with fresh frozen plasma (FFP) infusions with improvement in eye symptoms and dysmenorrhea. At the age of 29, a vaginoscopy and hysteroscopy were performed which again demonstrated fibrin membranes in the uterus. A repeat evaluation at the age of 30 revealed fibrin membranes in the cervix, fibrin accumulation in the uterus, and tube ostia obstructed. At age 33 she was enrolled in a clinical trial, an open-label phase 2/3 study of human Glu-plasminogen administered intravenously at 6.6 mg/kg every 2-4 days in 15 patients with plasminogen deficiency, registered at www.clinicaltrials.gov as #NCT02690714. She received intravenous plasminogen replacement therapy, starting in October 2016. At baseline, she had ligneous conjunctivitis and gynecologic lesions with regular, but atypical menstrual bleeding, discharging very small amounts of thick, mucus-like material over 1-2 days. Her eye lesions had resolved by week 12 of treatment. At the end of the first menstrual cycle on plasminogen treatment, she discharged a large mucus-like plug from the vagina, and had regular and normal menstrual bleeds after that. Approximately 20 weeks into treatment, she reported being pregnant to the investigator. After discussion with the clinical study sponsor, regulatory agencies and the regional ethical committee, the patient and her physician, it was agreed to continue plasminogen replacement therapy through the pregnancy, delivery and recovery period. After approximately 55 weeks into the study treatment, the patient had an uncomplicated pregnancy and delivered a healthy child with APGAR score of 9. The patient remained on PLG treatment post-partum, and her PLG activity trough levels were maintained until she came off the study when her levels went back to baseline. (Figure 1)

This is the first reported case of intravenous plasminogen used in a patient with C-PLGD and documented infertility who subsequently became pregnant and delivered a healthy child. 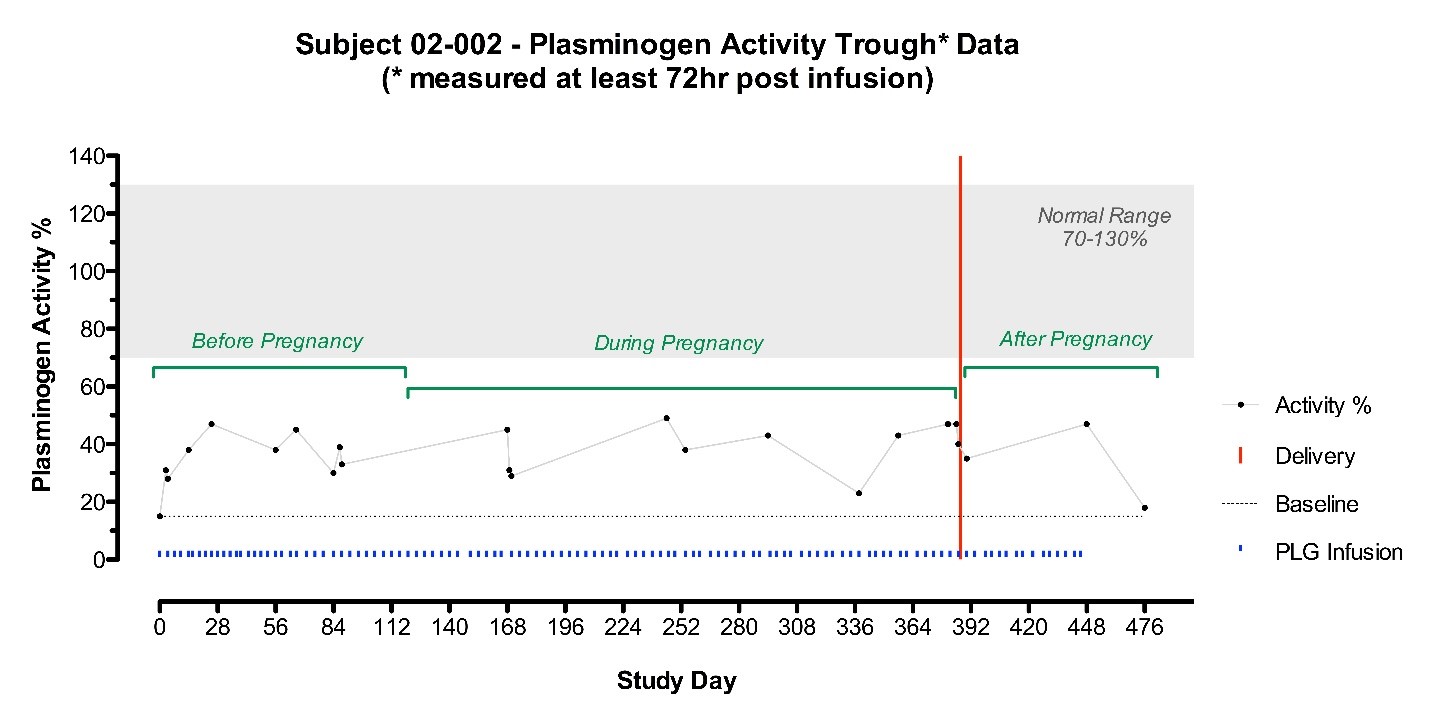