We assessed MGUS frequency and progression to MM, and frequency of all malignancies in the GD1 population relative to United States (US) population-based rates from the Surveillance, Epidemiology, and End Results (SEER) Program. Patients diagnosed with low leukocyte acid β-glucosidase activity and/or biallelic mutations in GBA1 who had dates for assessment and malignancies were included. Study period was 1993-2019. Age-adjusted incidence was compared with SEER data.

Among 1,995 patients with malignancy status information (yes/no), 245 patients (12.3%) had at least one malignancy diagnosed at ≥20 years of age; patients could report more than one malignancy. There were 61 hematologic malignancies of which the majority are non-Hodgkin’s lymphoma (NHL, 41.0%) and MM (34.4%). Mean age for NHL diagnosis: 55.6 years (SD=13.0); MM diagnosis, 62.0 years (SD=10.5). The average time from primary Gaucher treatment initiation to first hematologic malignancy diagnosis was 9.3 years. Of 193 non-hematological malignancies, 24.4% were basal or squamous cell skin cancers and 20.7% were breast. The age-adjusted rate comparisons with the SEER data show greater incidence rates for all malignancies combined, largely attributable to NHL, MM, liver, renal cell, and melanoma (Table 1). The reported incidence of lung and prostate cancer is unexpectedly low in the Registry population.

Our new findings show that despite common use of enzyme replacement therapy, the risk for MM and NHL in patients with GD1 continues elevated in all age groups compared to the general US population. Risk for liver cancer, renal cancer, and melanoma is also increased. The MGUS incidence rate in GD1 patients younger than 50 years old is also unexpectedly high and may indicate the need to monitor younger GD1 patients for MGUS. These findings underscore the relevance of cancer screening when following GD1 patients and the need for continued investigation of sphingolipid substrates and metabolites in carcinogenesis 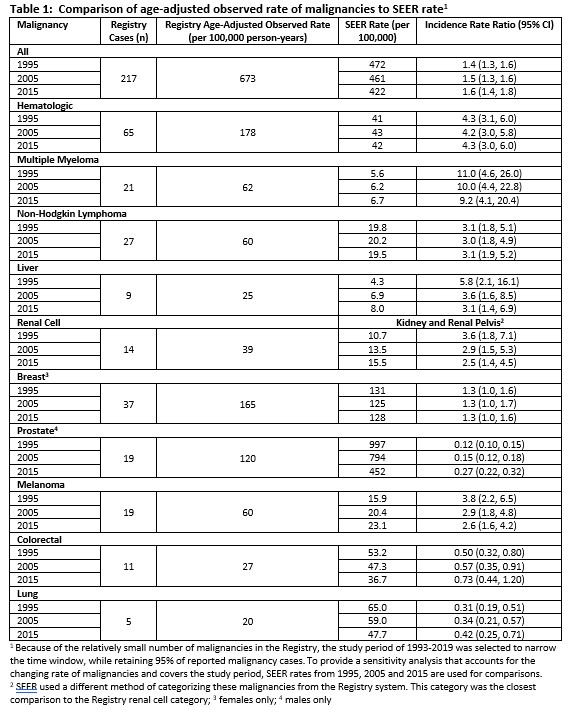