Background: In well-resourced countries, early mortality in sickle cell disease (SCD) is no longer a major feature, thus the burden of SCD mortality has shifted to adults. Recent data on patients with SCD in USA confirmed continuing improvement in adult survival, attributed to better preventative care. Health economics may play a key role in clinical outcome in SCD; we hypothesise that survival would be longer in a system which is not insurance based. King's College Hospital, London, UK has a large SCD cohort in a well-resourced setting within a national health service framework.

Methods: 712 adult (≥18 years) SCD patients were observed over 10 years (2004-13 inclusive) to identify mortality outcome (total 5268 patient-years of observation with median 8 years of observation per patient, over median 9 total hospital visits). Demographic data, sickle and alpha genotype were documented. Laboratory data were also collected (list in table): outpatient laboratory values were averaged over the 10 year period to create a “steady state” value for each patient. Mean number of hospital admissions with a sickle pain crisis was calculated (total admissions/number of observed years per patient).

IBM SPSS Statistics 22 was used for Kaplan Meier survival analysis and then regression analysis was undertaken, based on the Cox proportional hazards model, to identify variables which were associated with mortality, and produce hazard ratios for putative predictors (demographic, laboratory and admission data).

Cox regression analysis was conducted for HbSS/HbSβ0 patients (demographic, laboratory and admission data), see table. Risk of death is increased: 2.5-fold if ferritin is high (>1000ug/L), 6% for every extra 10umol/L total bilirubin, 20% for every extra 100 IU/L LDH, 18% for every extra 1 x109/L WBC (all steady state values). Hospitalisation rates were analysed two ways: using the continuous variable, risk of death is increased by 37% for every admission accrued in an individual's mean admission/year statistic; and using a dichotomous variable (high versus low admissions), those with high admission rates have a hazard ratio over 3-fold that of those with low admission rates.

Conclusions: These data indicate that adult survival in SCD in our institution is high; estimated median survival of 67 years for HbSS/Sβ0 and 82 years for HbSC. This is markedly longer than those recently quoted from the USA, which may be due to disparities in health economics. Cox regression sub-analysis for the HbSS/Sβ0 group reveals multiple “predictors” of increased mortality risk including classical laboratory markers of SCD severity - iron loading (likely correlated with disease severity via transfusion rate), inflammatory and haemolytic parameters - as well as confirming hospitalisation rate as a simple but strong predictor of survival in SCD. 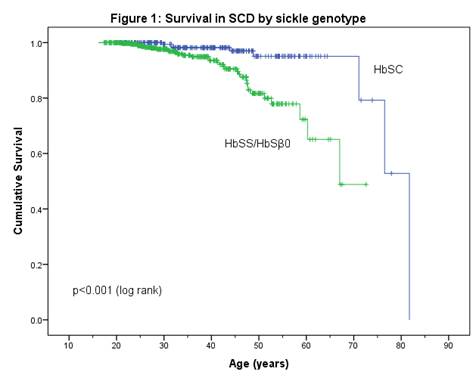 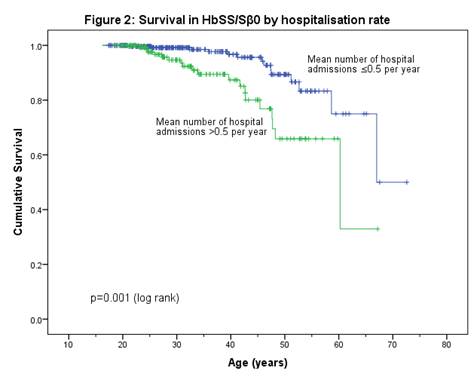