Background: Clonal hematopoiesis (CH) is an age-related expansion of mutated hematopoietic stem cells. Multiple studies have previously described distinct types of CH, CHIP (mutations in genes commonly associated with myeloid malignancies) as well as mosaic chromosomal alterations (mCA), that have been associated with increased risk of hematologic malignancies and cardiovascular morbidity. We hypothesized that the presence of both mCA and CHIP mutations may have an additive impact vis-à-vis risk of hematologic malignancy.

Methods: Data on 91,335 patients from the BioVU repository, a Vanderbilt University Medical Center biobank with linked de-identified EHRs, spanning 2006 to 2021 were included in the analysis. Peripheral blood-derived DNA of 91,335 subjects from BioVU were genotyped on the Illumina Multi-Ethnic Global Array (MEGAEX) platform, which contains more than 2 million SNPs. CHIP mutation calls (DNMT3A R882/JAK2 V617F) were made by deconvoluting the MEGAEX array intensity data. Predetermined array intensity scores greater than a defined threshold for DNMT3A R882 and JAK2 V617F mutations were highly predictive of the corresponding mutation, so these mutations were included in the analysis. Individuals with a diagnosis of hematologic malignancy (HM) prior to blood draw were excluded, while those that went on to develop HM post-blood draw were included in the analyses. The relationship between independent variables and disease progression and death was assessed using Cox proportional hazards model. All statistical analyses were performed using R.

Conclusion: In this large cohort of patients, the presence of CH (both mCA and DNMT3A/JAK2) in apparently healthy individuals positively correlated with blood count abnormalities and increased incidence of hematologic malignancy. The results from this large cohort of patients emphasize the significance of detecting both mCA and SNV/indels in clonal hematopoiesis. These results should be validated in large datasets to determine if detecting both mCAs and CH can augment clinical care and outcomes. 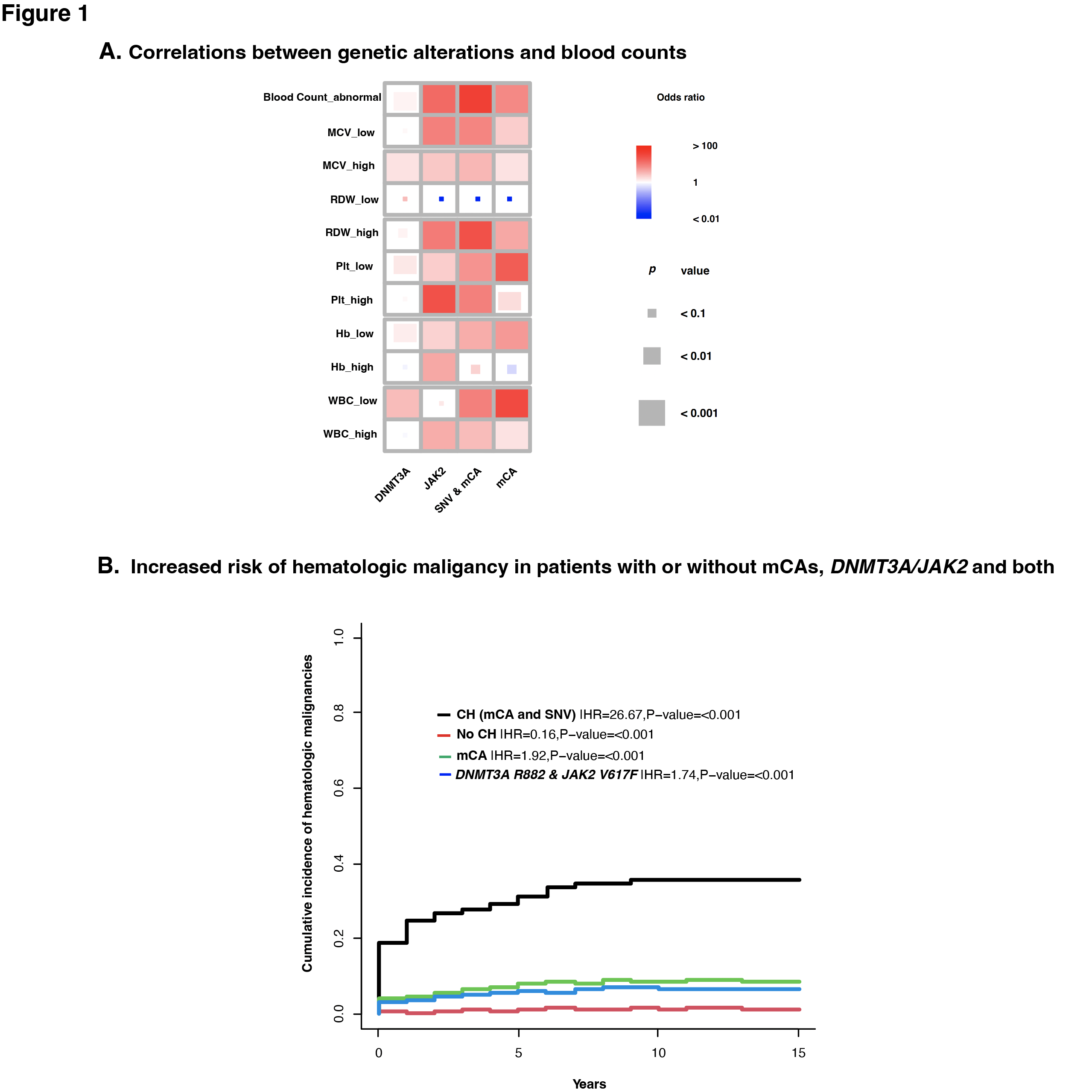