Background: Monoclonal gammopathy of undetermined significance (MGUS) and chronic kidney disease (CKD) are common conditions. When monoclonal gammopathy causes CKD it is referred to as monoclonal gammopathy of renal significance (MGRS) and a kidney biopsy is required to confirm the diagnosis. Because of this, some have speculated that MGRS may be severely underdiagnosed and have recommended considering a kidney biopsy in all individuals with MGUS who have microscopic hematuria, proteinuria, or declining estimated glomerular filtration rate (eGFR) of <60 mL/min/1.73m2. If MGRS were more common than previously thought, the prevalence of CKD in persons with MGUS would be expected to be higher than persons without MGUS. We aimed to compare the prevalence of CKD in individuals with and without MGUS in a large, prospective, screened, population-based cohort. Furthermore, we aimed to assess possible association between M protein concentration and kidney function.

Methods: A total of 75,422 participants in the Iceland Screens, Treats or Prevents Multiple Myeloma (iStopMM) study were screened for MGUS with serum protein electrophoresis (SPEP), serum free light chains (FLC), and immunofixation (IFE). All previous clinical laboratory samples were obtained, including serum creatinine (SCr), urine albumin/creatinine ratio (ACR) and urinalysis. CKD was defined as SCr-based eGFR of <60 mL/min/1.73m2, or proteinuria or hematuria, present for >90 days. Participants diagnosed with lymphoproliferative disorders or without data on kidney function were excluded. Power analysis demonstrated that this sample size yielded 90% power to detect a 1.5% absolute difference in the prevalence of CKD in persons with and without MGUS. Prevalence of CKD was evaluated using multivariable logistic regression adjusted for age, sex and MGUS status. The association between eGFR and M protein concentration was assessed with linear regression for continuous eGFR and ordinal logistic regression for CKD categories. All models included age and M protein concentration as four knot restricted cubic splines. Sensitivity analyses were performed where CKD was defined solely by persistently lowered eGFR and as a combination of persistently lowered eGFR, proteinuria, and hematuria.

Conclusion: In this nationwide prospective population-based screening study of nearly 70,000 individuals, we found no association between MGUS and CKD, regardless of whether CKD was defined based on eGFR, urinary findings, or both. Furthermore, we found no association between M protein concentration and eGFR or severity of albuminuria. We conclude that in the absence of multiple myeloma, the results of SPEP, IFE, and serum FLC measurements are of little value in the evaluation of CKD. Furthermore, our results are not consistent with substantial underdiagnosis of MGRS. 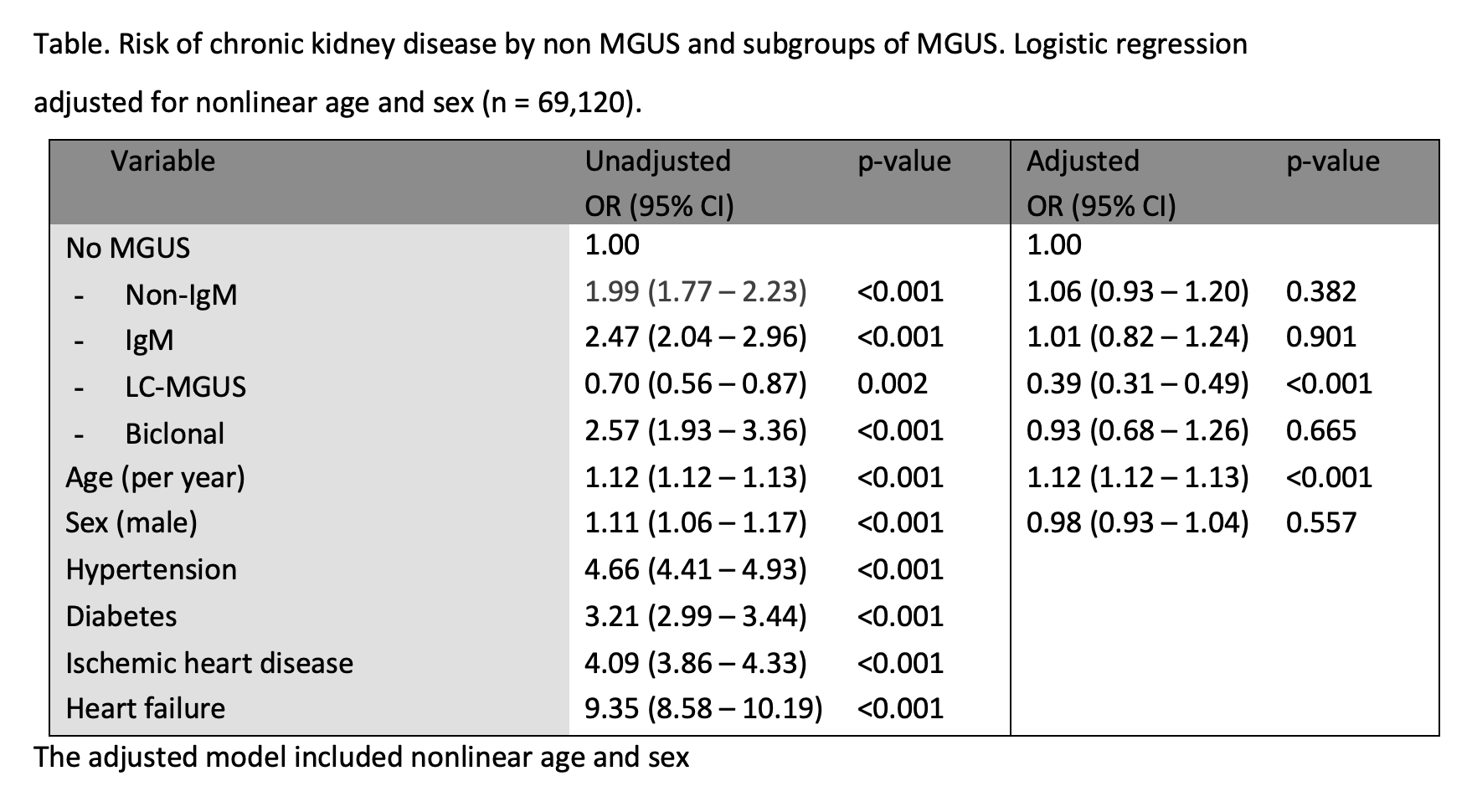