Introduction: Multiple myeloma (MM) is consistently preceded by monoclonal gammopathy of undetermined significance (MGUS), but most patients with MGUS never develop MM. The initial work-up of MGUS may include bone marrow (BM) sampling and imaging studies to rule out MM, but these are often omitted in clinical practice. Based on diagnostic criteria, >10% bone marrow plasma cells (BMPC) changes the diagnosis from MGUS to smoldering multiple myeloma (SMM), in which risk of progression to MM is higher. Several guidelines provide recommendations as to which patients should undergo BM sampling, of which some recommend that sampling may be deferred in low risk MGUS according to the Mayo Clinic risk stratification model. Importantly, there are no prospective data to support any of the available guidelines. Our aim was to develop a multivariable model to predict the risk of ≥10% BMPC to inform the decision to obtain a BM sample.

Methods: Data were obtained from the ongoing Iceland Screens, Treats, or Prevents Multiple Myeloma (iStopMM) population-based screening study for MGUS with randomization to different follow-up strategies. iStopMM screened 75,422 persons ≥40 years of age (51% of the Icelandic population) and identified 3,358 MGUS cases, of which 2,542 were randomized to active follow-up. A multivariable proportional-odds logistic model was derived on participants with IgG, IgA or biclonal MGUS who were randomized to a follow-up strategy that included routine BM smear and trephine biopsy. Participants who did not undergo BM sampling within six months of randomization, whose BM sample was not interpretable, or who had any CRAB feature suggestive of MM, were excluded. The model outcome was defined as the highest percentage of BMPC on smear or trephine biopsy: 0-4%, 5-9%, 10-14%, and ≥15%. Predictors were: MGUS isotype (IgG, IgA, biclonal), M protein concentration, free light chain ratio, and total IgG, IgA, and IgM concentrations. Continuous variables were modeled with four knot restricted cubic splines. The model was internally validated using bootstrapping techniques and was compared to the Mayo Clinic model using decision curve analysis over a range of thresholds of predicted risk, below which deferring BM sampling could be considered justified.

Discussion: We have derived and internally validated a multivariable model to predict the risk of ≥10% BMPC in a prospective population-based cohort of persons with IgG, IgA and biclonal MGUS. The model uses absolute measured values of laboratory tests that are routinely ordered in the initial work-up of MGUS and can easily be made available as an online calculator. We have shown that our model consistently outperforms other methods of deciding whether BM sampling may be deferred, including the Mayo Clinic model. The main strength of our study is the quality of the underlying data. The iStopMM cohort is uniquely suited for model derivation, as the decision to obtain a BM sample was randomly allocated and the sample size is large. This study provides an evidence-based approach to selecting persons with MGUS in whom BM sampling may be deferred. Although the model will need external validation, it has the potential to decrease the number of people unnecessarily exposed to BM sampling and to improve the efficiency and cost-effectiveness of the diagnostic evaluation of MGUS. 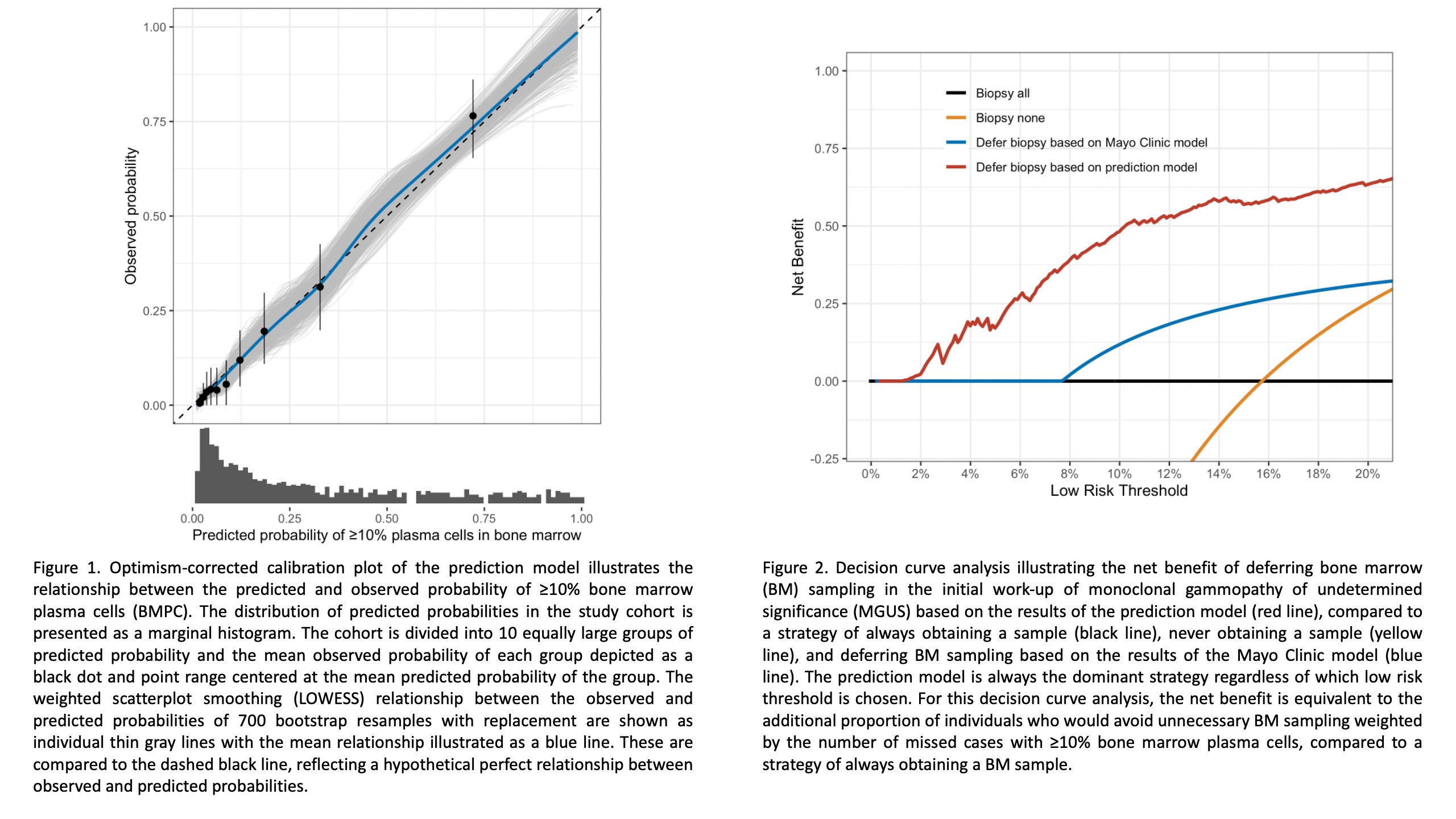