4537 Hypercalcemia in Individuals with Monoclonal Gammopathy of Undetermined Significance: Results from the Istopmm Study

Multiple myeloma (MM) is a malignancy of bone marrow plasma cells, characterized by monoclonal immunoglobulins in the blood or urine and associated organ dysfunction encapsulated in the CRAB criteria (hypercalcemia, renal impairment, anemia, and bone lesions). MM is always preceded by monoclonal gammopathy of undetermined significance (MGUS), an asymptomatic premalignant stage. MGUS is relatively common in the general population, with an age-adjusted prevalence of 3-6%, dependent on gender and race. No treatment is recommended for MGUS, but a regular follow-up to detect progression to MM is advised. This includes regular measurements of serum calcium to capture MM-associated hypercalcemia. Hypercalcemia in the general population is most commonly caused by hyperparathyroidism or non-MM malignancy. We are unaware of any systemic study designed to guide physicians on how to react to hypercalcemia in individuals with MGUS.

The ongoing Iceland Screens, Treats, or Prevents Multiple Myeloma (iStopMM) study is a population-based screening study for MGUS and a randomized trial of follow-up strategies. In total, 80,759 Icelanders aged 40 years and above enrolled in the study, and 75,422 were screened for MGUS using serum protein electrophoresis (SPEP) and a free light chain assay. Two-thirds of those who screened positive for MGUS were randomized to active follow-up at the study´s clinical research center. Participants who were in active follow-up in the study between April 1. 2017, and March 1. 2022, and had albumin-corrected serum calcium levels ≥ 2.55 mmol/L or serum ionized calcium levels ≥ 1.40 mmol/L were identified. The medical records of the participants were reviewed in collaboration with a senior endocrinologist to establish the persistence of hypercalcemia and underlying diagnosis. If MM was found as the cause of the hypercalcemia, then other CRAB features present at diagnosis were also recorded. In addition, the characteristics of the study cohort were compared with individuals without hypercalcemia who were in active follow-up in iStopMM using Student’s t-test and Fisher exact test.

Based on these results, we conclude that hypercalcemia, particularly isolated hypercalcemia, is not a strong indicator of MGUS progression and is most often caused by other underlying diseases. Thus, in the absence of other CRAB features, hypercalcemia in MGUS should be approached in the same way as in patients without MGUS. Measurements of serum calcium should be repeated, and hyperparathyroidism should be ruled out before undertaking further assessments for possible malignancy, including MM. These findings contribute to a more evidence- and value-based approach to the care of individuals with MGUS. 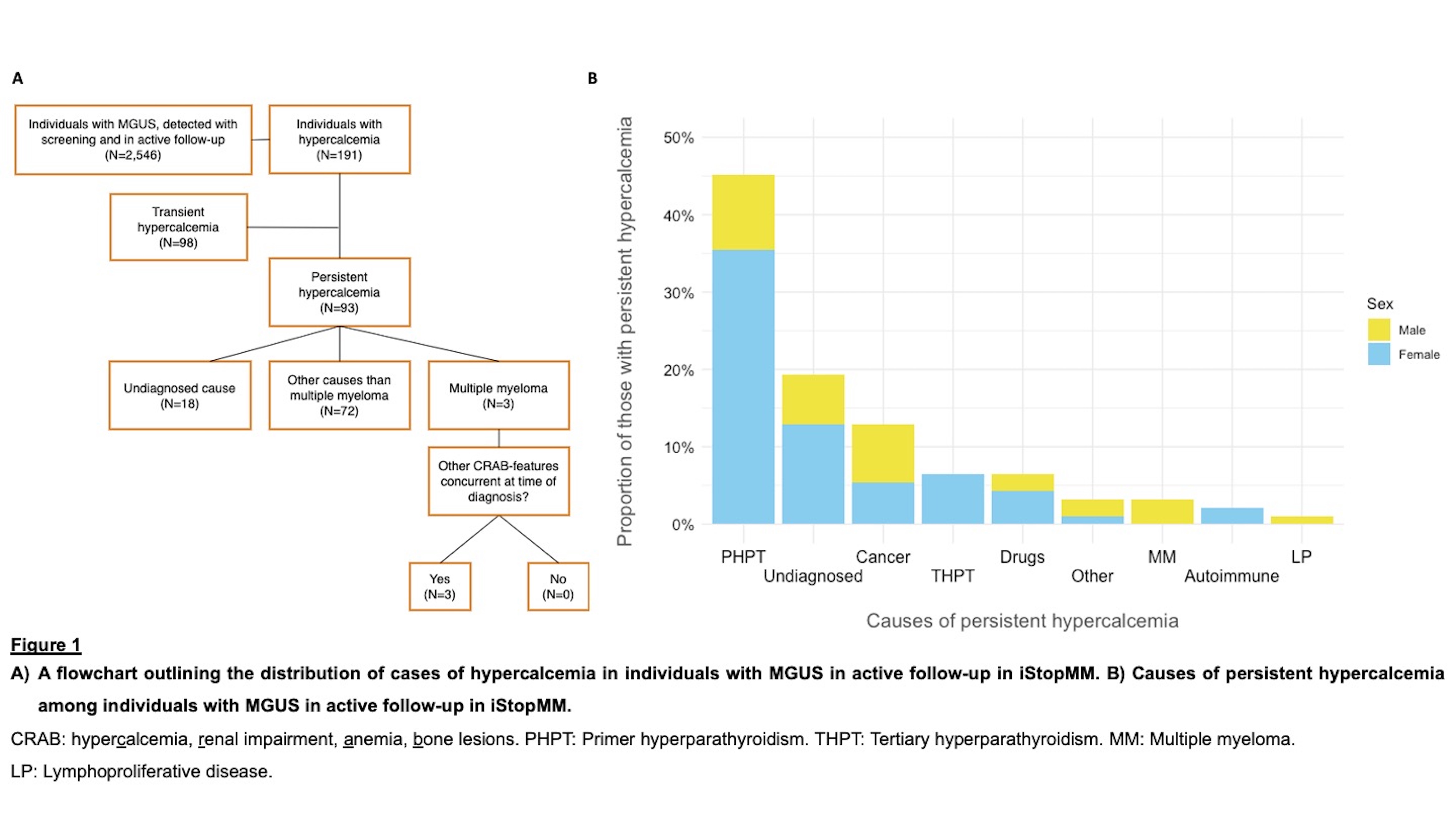