761 Efficacy and Safety of Daratumumab Monotherapy in Newly Diagnosed Patients with Stage 3B Light Chain Amyloidosis: A Phase 2 Study By the European Myeloma Network

Introduction. Despite introduction of bortezomib-based regimens in the treatment of light-chain (AL) amyloidosis, early death remains a frequent complication particularly for patients (pts) with advanced cardiac involvement such as Mayo stage 3B. Daratumumab, an IgGκ monoclonal anti-CD38 antibody, has proven effective and tolerable in pts with AL amyloidosis, either alone or in combination with bortezomib-cyclophosphamide-dexamethasone (D-VCd). However, patients with Mayo stage 3B disease had been excluded from enrollment in the registration trial of D-VCd. This study evaluates the efficacy and safety of daratumumab monotherapy in newly diagnosed (ND) stage 3B AL amyloidosis pts.

Methods. The ongoing EMN22 phase 2, open-label, multinational study (NCT04131309) aims to enroll 40 ND pts with stage 3B AL amyloidosis. Eligible adult pts have N-terminal pro-brain natriuretic peptide (NT-proBNP) ≥8500 pg/mL and high-sensitivity troponin T (hsTnT) >54 pg/mL. Daratumumab monotherapy, was initially administered intravenously (16 mg/mL), and since February 2020 subcutaneously as a fixed dose of 1800 mg weekly during cycles (C)1 and 2, every 2 weeks for C3–6, and every 4 weeks thereafter. Pts not achieving a hematological very good partial response (VGPR) or better by C4 can receive additional weekly bortezomib and low dose dexamethasone (Vd). Treatment continues for up to 2 years from initiation or until disease progression or initiation of a new therapy. The primary endpoint is OS rate at 6 months. This analysis includes pts who initiated study treatment ≥6 months before data cut-off (31 May 2022); median (95% confidence interval [CI]) OS was obtained by Kaplan-Meier analysis.

Conclusions. In this high risk (stage 3B) patient population, daratumumab monotherapy demonstrates clinically meaningful hematologic and cardiac responses with no new safety signals. Compared to historic controls, early mortality is reduced and the median OS of stage 3B pts has been improved suggesting that novel treatments can help change the course of AL Amyloidosis even in pts at advanced stages of the disease. The study completed accrual and updated results will be presented in the meeting. 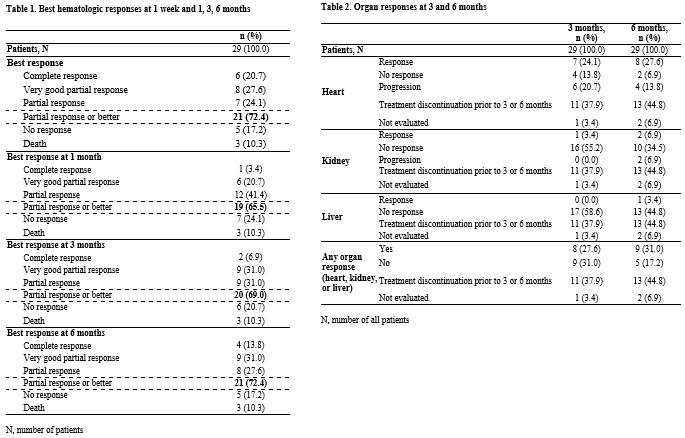