Background: A major limitation for quantification of bone marrow (BM) plasma cells (PC) is the quality of the sample. Hemodilution of BM aspirate samples results in underestimation of PC numbers and may lead to false-negative results in minimal residual disease (MRD) assessment. Next-generation flow (NGF) cytometry has the potential for using BM-associated cell populations as internal sample quality control. However, there is limited data on the reliability of different cell populations as markers of hemodilution.

Aim: To evaluate the association between BM-associated cell populations and hemodilution in diagnostic BM aspirate samples and to develop a hemodilution scoring model.

Methods: Participants were enrolled from the Iceland Screens, Treats, or Prevents Multiple Myeloma (iStopMM) study, a population-based screening study for MM precursors and randomized trial of follow-up strategies. Next-Generation Flow (NGF) cytometry (tube 1 of the EuroFlow MM-MRD panel) was used to assess the percentages of B cell precursors (BCPs), myeloid precursors (MPs), nucleated red cells (NRCs), mast cells (MCs), and PCs in 351 BM aspirate samples. Per protocol, BM samples were collected either as 1st pull or 2nd pull from 219 individuals (107 MGUS, 87 SMM, and 25 MM). BM sample white blood cell count (WBC) was used as a surrogate marker for hemodilution and the degree of association between WBC count and numbers of BM-associated populations was assessed using Spearman rank correlation. Linear discriminant analysis of MP and NRC percentages (of normal cellularity) in 1st vs 2nd pull samples was used to obtain population coefficients for the development of a hemodilution score model. A cutoff value of hemodilution score to discriminate between 1st and 2nd pull samples was found using receiver operated characteristic curve analysis. For dilution experiments, BM samples were manually diluted with paired PB based on cellularity. The Mann-Whitney U test was used to assess statistical significance between groups.

Conclusion: In this study of BM samples from screened individuals in the iStopMM study using NGF we found that there is a large difference in the number of PCs between 1st and 2nd pull samples, due to hemodilution. As a consequence, 1st pull samples are preferred as the use of 2nd pull (or later) samples may lead to misdiagnosis. We present a hemodilution score model which can aid in evaluating the quality of BM samples and indicate whether they are appropriate for diagnostic use. Importantly, the model is based on diagnostic samples and further validation is needed in patients undergoing MRD assessment following treatment. By objectively assessing hemodilution, sample quality may be taken into account when interpreting results, providing more information and improved prognostic value and utility of flow cytometry in patients with MM and its precursors. 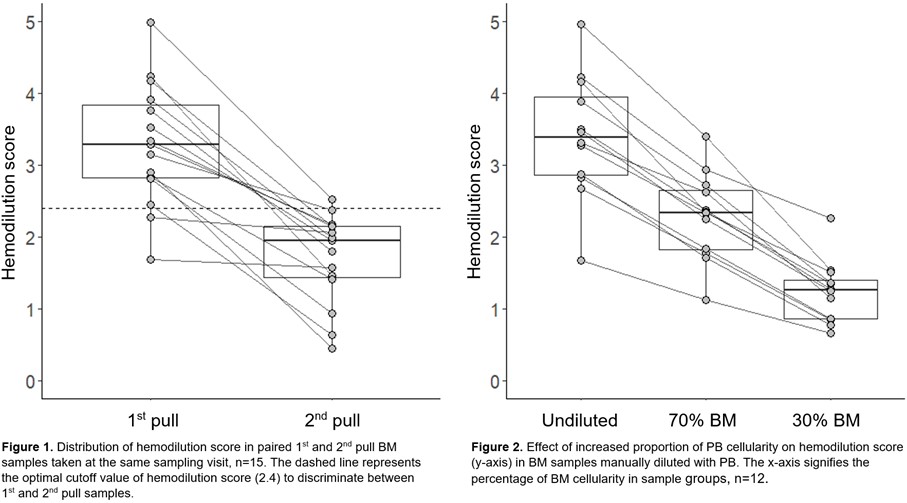