The presence and number of circulating tumor plasma cells (CTPCs) in peripheral blood (PB) as detected by flow cytometry has previously been associated with increased risk of progression from smoldering multiple myeloma (SMM) to multiple myeloma (MM). CTPCs may therefore be a marker for tumor burden and/or tumor aggressiveness in SMM that can, if the correlation to progression can be verified, potentially spare patients from bone marrow biopsies. However, the rate of detectable CTPCs in the overall SMM population is not known and the dynamics of CTPC numbers between diseases stages and risk categories in a screened cohort of individuals with SMM have not been studied.

To investigate the detection and quantification of CTPCs in individuals with SMM diagnosed in the screened population-based Iceland Screens, Treats, or Prevents Multiple Myeloma study (iStopMM), and to associate the findings to known clinical risk models of progression from SMM to MM.

Individuals diagnosed with SMM, monoclonal gammopathy of undetermined significance (MGUS) and MM in the iStopMM study were included. Next-generation flow (NGF) cytometry was used to assess CTPC numbers in PB and the limit of detection (LOD) was set at ≥20 tumor PC. An optimal cutoff value of the percentage of CTPC to discriminate between SMM and MM was found using receiver operating characteristic (ROC) curve analysis of individuals with CTPCs detected. In a subgroup of individuals with SMM, interphase fluorescent in situ hybridization (FISH) analysis was performed. The difference in frequency of CTPC was tested between risk groups according to the PETHEMA and Mayo 2/20/20 models, the groups with, and without high-risk FISH abnormalities and between clinical entities (MGUS, SMM and MM). The Mann-Whitney U test or the Kruskal-Wallis tests were used to assess differences observed between two or more than two groups, respectively.

CTPCs are a potential marker of tumor burden or tumor aggressiveness in SMM and are present in 69% of the overall population with SMM. Both the detection and numbers of CTPCs increase progressively from MGUS, to SMM, and MM. A similar trend was observed with increasing risk score in SMM, according to two established risk stratification models. These results indicate that NGF of PB to detect CTPCs might have a role in the management of SMM. Future studies with serial monitoring of CTPCs will help to further define the clinical value of CTPCs in relation to the risk of progression, and to define how CTPC monitoring impacts the role of established markers, especially to identify individuals with low risk of progression where bone marrow sampling might be omitted. This would focus clinical care and treatments in SMM and MM to those who benefit the most from them while limiting interventions in those who do not need them. 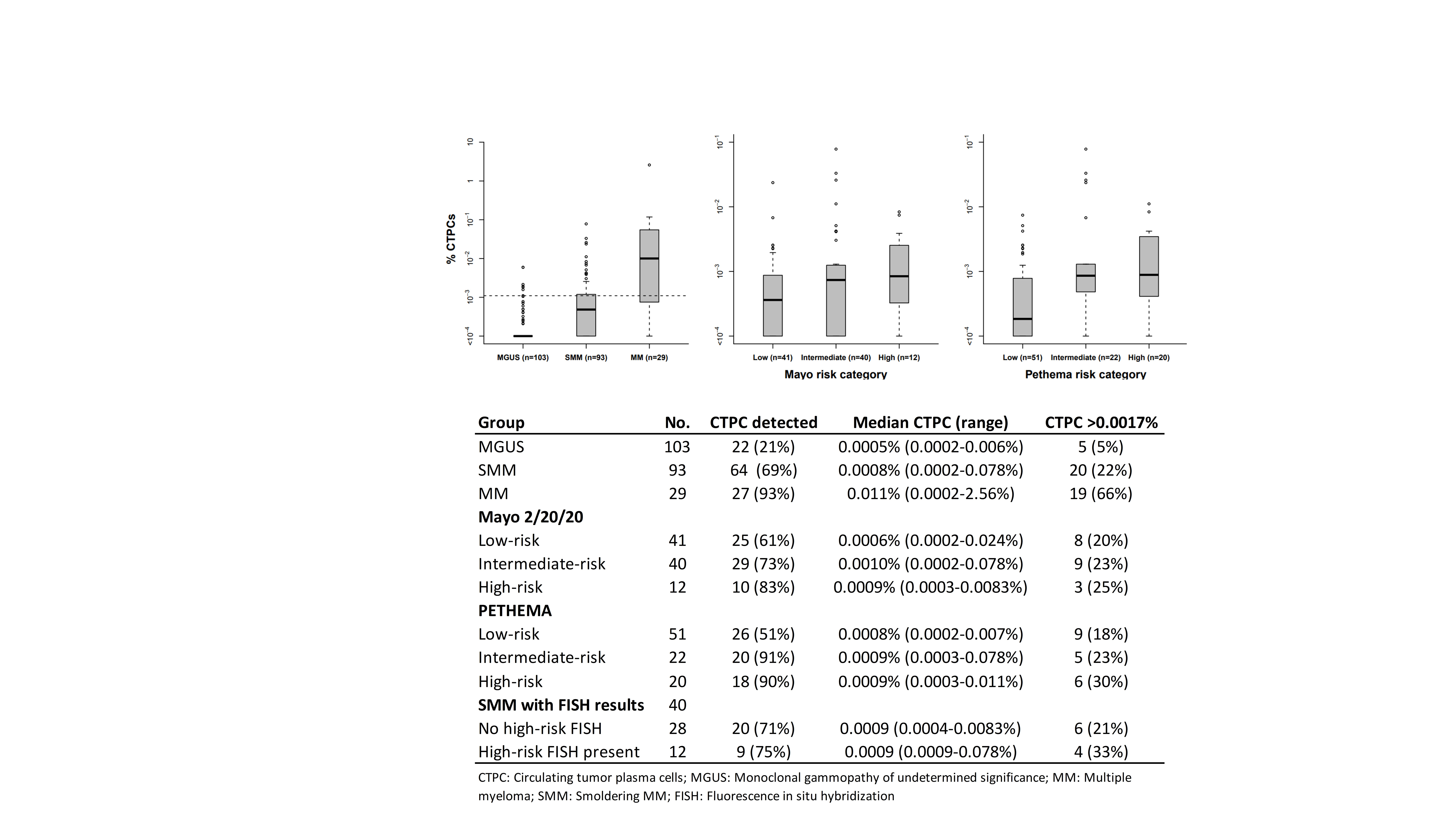