Monoclonal gammopathy of undetermined significance (MGUS) is the precursor of multiple myeloma (MM) and related disorders. It is characterized by asymptomatic presence of monoclonal immunoglobulins (paraproteins) on serum protein electrophoresis (SPEP) and immunofixation electrophoresis (IFE). Previous smaller studies have found that in approximately 3% of MGUS cases, more than one paraprotein is observed. The isotype patterns, clinical implications, and underlying biology of these multiple paraproteins (MP) are poorly understood. To our knowledge, we have performed the first large, prospective study of MGUS cases with multiple paraproteins.

Data were acquired from the ongoing iStopMM study, a population-based screening study for MGUS and randomized trial of follow-up strategies. A total of 75,422 Icelanders over 40 years old were screened for MGUS by SPEP and IFE. Two-thirds of those with MGUS were randomized to further evaluation and follow-up.

Participants with a paraprotein on SPEP and IFE were included in the study. Those with previous MM or related disease, paraprotein ≥3.0 g/dL, or an involved to uninvolved free light chain (FLC) ratio ≥100 were excluded. Those who had more than one monoclonal peak on IFE at baseline were defined as having MP. Baseline characteristics of those with MP and a single paraprotein were then compared. In participants who were followed at the study clinic, rates of progression to MM, smoldering MM (SMM), Waldenström macroglobulinemia (WM) and other related disorders were compared using logistic regression, adjusting for age.

Available next generation flow cytometry (NGF) analyses of bone marrow in those with MP (MM-MRD panel) were reviewed.

There was no difference in the proportion diagnosed with SMM, SWM, or WM. None with MP at baseline progressed to MM, compared with 1% (n=18) of those with a single paraprotein (Table).

In this large, population-based screening study with 75,422 participants, we found MP to be more common in MGUS (9.4%) than previously observed, and to be associated with older age and male sex. IgM paraproteins were more common in those with MP and were associated with a higher number of paraproteins. Over half of those with MP were later found to a have a single paraprotein, and 42% of paraproteins were not observed again during follow-up. During a median of 4 years of follow-up, none with MP developed MM. We speculate that MP could in some cases be caused by a strong or defective but transient immune response and could be associated with lower risk of MGUS progression. Interestingly, we observed multiple abnormal monoclonal plasma cell populations in some with MP, but whether they develop from the same insult or independently is not clear.

With the advent of mass spectrometry-based diagnostics the rate of MP is expected to increase significantly. Understanding their clinical implications and biology will therefore become more important in guiding clinical practice. Mass spectrometry results for this cohort are pending and will shed more light on the prevalence, implications, and underlying biology of MP in MGUS. 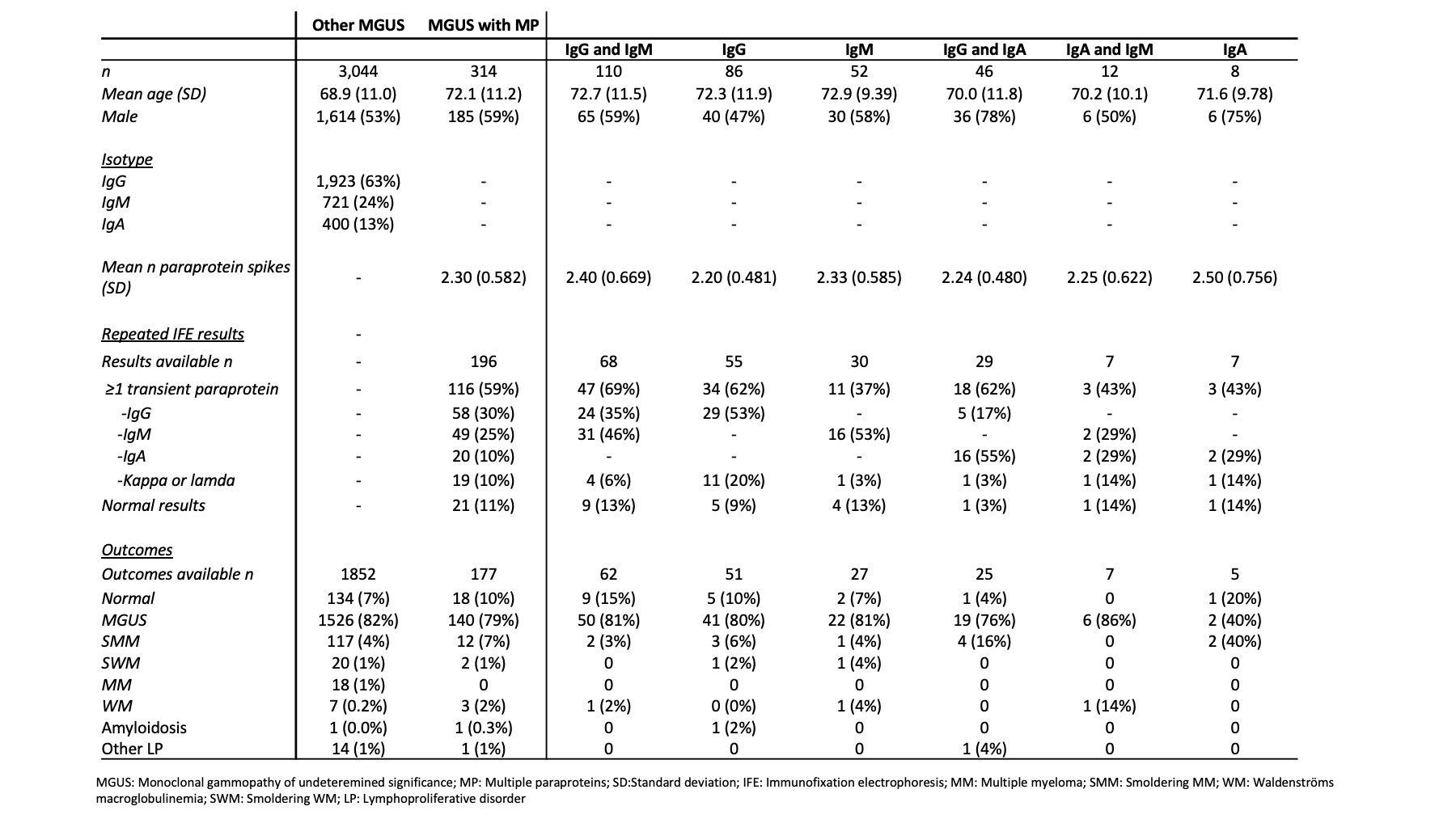