Hyper-CVAD plus ponatinib is highly effective in Philadelphia chromosome-positive (Ph+) acute lymphoblastic leukemia (ALL). The sequential combination of low-intensity chemotherapy and ponatinib followed by blinatumomab and ponatinib may lead to deeper and more durable responses, while minimizing toxicity of intensive chemotherapy and sparing the need for allogenic stem cell transplantation (ASCT).

In this phase II study, adults with either newly diagnosed (ND) Ph+ ALL, relapsed/refractory (R/R) Ph+ ALL, or chronic myeloid leukemia in lymphoid blast phase (CML-LBP) were eligible. Patients (pts) in the ND cohort could have received up to two cycles of therapy prior to enrollment. Pts received mini-hyper-CVD alternating with methotrexate and cytarabine on cycles 1-4, followed by blinatumomab and ponatinib on cycles 5-8. Ponatinib 30mg daily was given in cycle 1, and the dose was reduced to 15mg daily once a complete molecular response (CMR) was achieved. Pts with CD20+ disease received rituximab on cycles 1-4. Pts received 12 total administrations of prophylactic intrathecal chemotherapy with alternating cytarabine and methotrexate. Following consolidation, pts received maintenance therapy with 15 cycles of ponatinib plus vincristine/prednisone (maintenance cycles 1-3, 5-7, 9-11, and 13-15) alternating with ponatinib plus blinatumomab (maintenance cycles 4, 8, and 12) followed by ponatinib monotherapy daily for at least 5 years. The primary endpoint for pts with ND Ph+ ALL was the CMR rate. The primary endpoint for pts with R/R Ph+ ALL or CML-LBP was the CR/CRi rate. Secondary endpoints included complete remission duration (CRD), overall survival (OS), and safety.

All pts who were evaluable for morphological response achieved CR. Among 8 evaluable ND pts, 6 achieved CMR. Two of 3 evaluable R/R pts and 1 of 2 evaluable CML-LBP pts achieved CMR. Among the 9 pts who achieved CMR, all but one achieved CMR during the chemotherapy plus ponatinib cycles. Out of the 5 ND pts who had evidence of myeloid involvement at presentation, 2 did not achieve CMR (both p190). All 6 pts who underwent Clonoseq MRD assessment achieved MRD negativity at 10-6 by this assay.

With a median follow-up of 23 months (range, 6-31), the 2-year CRD and OS rates are 90% and 78%, respectively, across all cohorts (Figure 1), and are 89% and 82%, respectively in the ND cohort. Among the 11 ND pts, 1 pt (9%) relapsed, 2 pts (18%) died in CR (both due to COVID-19), and 8 pts (73%) are in continuous remission without ASCT. The 1 ND pt who relapsed developed CNS-only relapse during maintenance in the setting of non-compliance with ponatinib. Among the 3 R/R pts, no pts relapsed, 1 pt underwent ASCT, 1 pt died in CR from methotrexate-associated disseminated necrotizing leukoencephalopathy (autopsy-proven), and 1 pt is alive in continuous remission without ASCT. Among the 2 CML-LBP pts, neither relapsed, 1 pt underwent ASCT in first remission, and both are alive.

Treatment was overall well-tolerated. The ponatinib dose was reduced in 2 pts prior to obtaining CMR due to toxicity (1 pancreatitis, 1 cardiomyopathy). One pt discontinued ponatinib and switched to dasatinib due to pulmonary embolism that occurred in cycle 2. No pts required dose-reduction or discontinuation of blinatumomab. The 30- and 60-day mortality rates were 0%.

Sequential combination of low-intensity chemotherapy and ponatinib followed by blinatumomab and ponatinib is highly effective and well tolerated in Ph+ ALL. 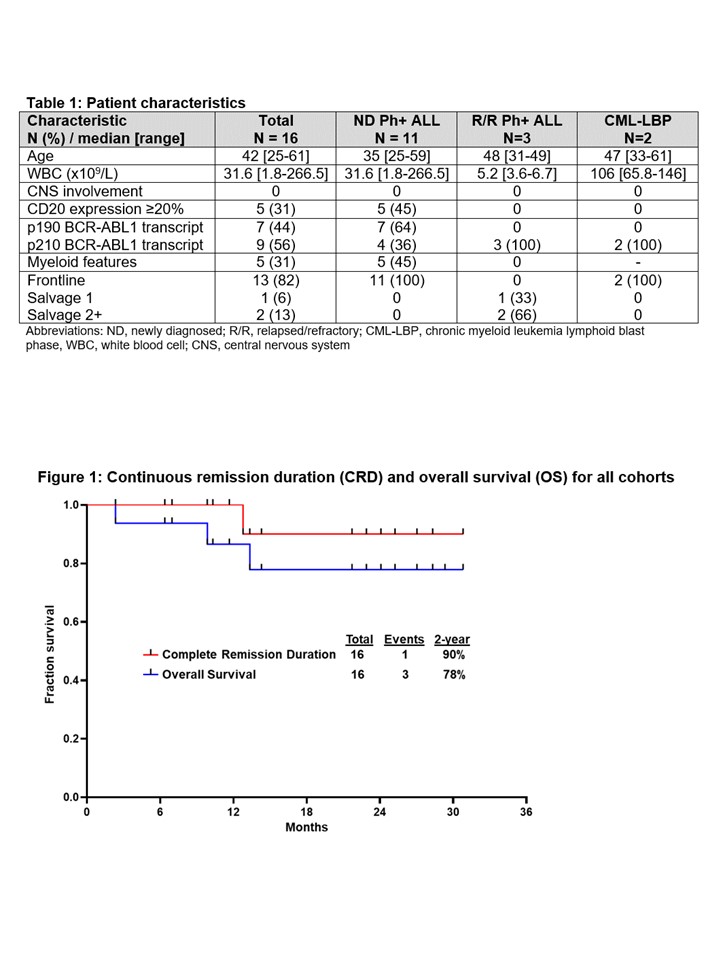