Background: Differentiation arrest resulting from aberrant methylation represents a key pathogenic and phenotypic feature of MDS. Hypomethylating agents (HMA) can reverse epigenetic dysregulation, but as single agents fail to control the disease in approximately 50% of patients, many of whom progress to AML and carry a dismal prognosis. We hypothesized that Differentiation Scoring (DS) derived from Cellworks Computational Omics Biology Model (CBM) of each patient’s genomic aberrations could serve as a biomarker to predict response to HMA.

Methods: We studied 169 MDS patients treated with azacytidine (n = 86) or decitabine (n = 83) whose genomic aberrations and clinical outcomes were available from public databases. Biosimulation of the disease state was computationally derived from pathways that were up- or down-regulated by individual genomic aberrations. DS was defined as the ratio of the quantified impact of key differentiation biomarkers in myeloid malignancies (CEBPA, GATA1, SPI1 and ITGAM) divided by the impact of HOXA9 transcription, a known repressor of differentiation, and normalized on a log2 scale.

We also used CBM to determine the change in DS attributable to HMA to define an efficacy score (ES) as a parameter of drug response. A Pearson correlation coefficient was obtained using the two variables. DS in clinical responders (R) and non-responders (NR) was evaluated with the Student t-test. We defined DS > 1.5 as DS-high and < 1.5 as DS-low. Survival data were available for 101 patients and correlated with DS-high (n=49) and DS-low (n=52) groups using a KM-curve.

Conclusions: Computational biosimulation based on patients’ individual genomic aberrations reveals a spectrum of DS among patients with MDS. DS strongly predicted HMA response. In general, NR had lower DS and survival than DS-high patients. While patients with DS-low scores might have fared even worse without HMA therapy, we propose that DS-low patients should be considered for novel combination therapy at the time of diagnosis given their unsatisfactory outcomes with HMA therapy as a single agent. 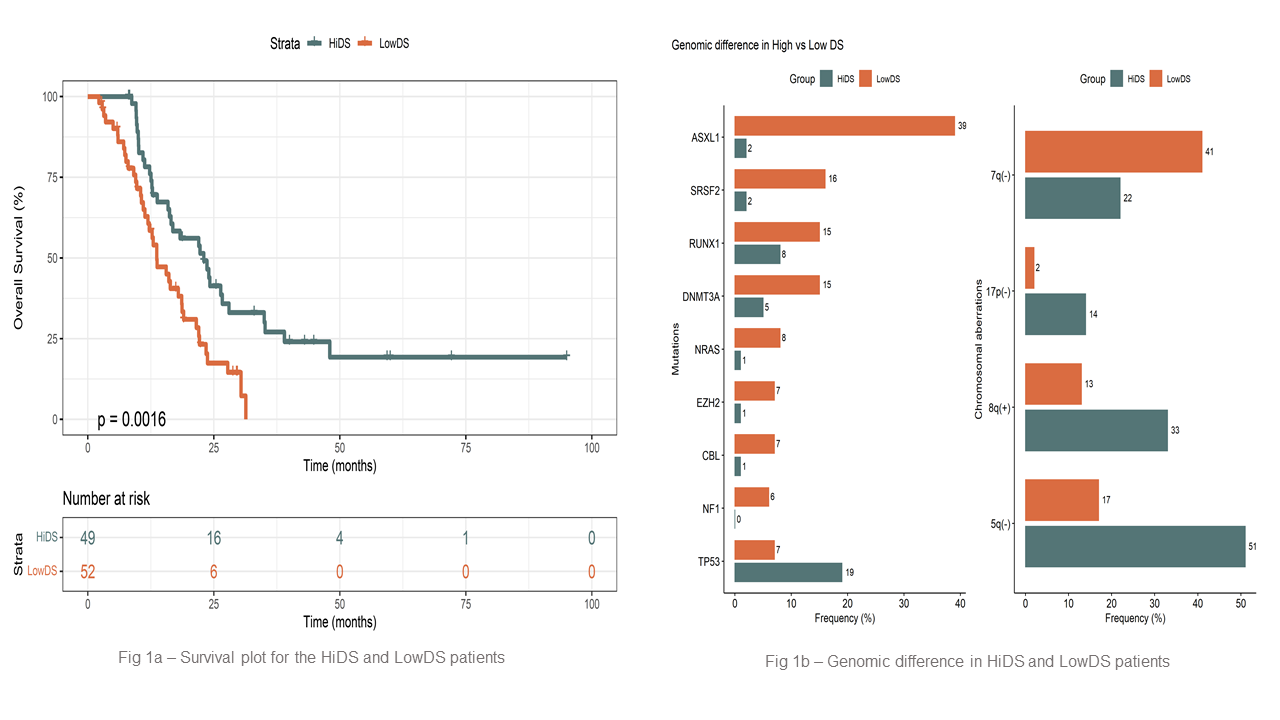