Asciminib (ASC), a first-in-class STAMP (Specifically Targeting the ABL Myristoyl Pocket) inhibitor, inhibiting BCR-ABL1 via allosteric binding. ASCEMBL trial showed superior efficacy of ASC to Bosutinib (BOS) with a higher molecular response rate, and a lower rate of discontinuation due to lack of efficacy (24.2% vs 35.5% at week 96). However, 24.2% of the patients still experienced lack of efficacy with ASC monotherapy. Also, out of the 39 patients who discontinued ASC due to lack of efficacy, 22 patients (56%) showed a new or persistent ABL1 kinase domain (KD) mutation either on ATP binding sites or Myristoyl pocket site. This finding suggests that ASC monotherapy is not always sufficient to overcome TKI-resistance particularly in those who already experienced multiple TKI failure. Accordingly, dual inhibition of ABL1 kinase protein with ASC combined with ATP binding pocket inhibiter (ABPI) is very attractive option to overcome TKI resistance.

The remaining question is dose. A phase 1 study attempted to determine appropriate dose of ASC in combination with fixed dose of ABPIs including Imatinib (IMA), Dasatinib (DAS) and Nilotinib (NIL). But, this approach with fixed dose of ABPIs could add up toxicities not just from ABPIs but also from the combination of two drugs. Accordingly, a different strategy is to be developed to reduce the exposure to ABPI, while combining with ASC.

In the present study, we simulated the combination treatment of ASC with ABPIs based on a clinically accessible fixed-dose for various ABL1 mutations to obtain answers to the following questions:

In order to simulate the combination treatment of ASC with ABPIs, the IC50 for ASC and ABPI measured from wild type K562 and BaF3BCR-ABL+cell lines were applied: ASC (3nM), IMA (150nM), BOS (10nM), DAS (0.8nM) and NIL (10nM) was applied in the wild type (WT) BaF3 cell lines and cell inhibition was assessed with WST-8 assay. 8 different BaF3 cell lines including wild type, G250E, Y253H, E255K, M244V, M351T, F317V and H369P mutant lines were treated with ABPI alone, ASC alone, and in combination by serial dilution based starting from the measured IC50 concentration, and the Dose-Response matrix was calculated and analyzed through SynergyFinder.

A part of the results are summarized in the figure. As shown, with each ABPI at the baseline IC50 concentration in K562 cells, cell growth was inhibited to 59.8%, 56.9%, 61.5%, 59.9% and 71.6-79.4% with IMA, BOS, DAS, NIL and ASC (Fig A). When cell growth inhibition was assessed with combination treatment of reduced dose of ABPI and fixed dose of ASC (3nM), we observed that the combination treatment of ASC with ABPI can inhibit BaF3 cell growth even at a reduced concentration of ABPI from IC50 (Fig B). When combined of ABPI at baseline doses with 3nM ASC, 100% of cell inhibition was noted as expected. When treated with 3nM ASC with with 50% reduced dose of ABPI, 84.6-100% of cell inhibition was noted in WT, 99.2-99.6% in G250E, 96.8-99.4% in E255K mutant BaF3 cell lines, concluding that these cell lines were highly sensitive to double blockade; M351T and F317V BaF3 cell lines showed in the range between 30-77% of cell inhibition with a half dose of ABPI/baseline dose ASC, referring it intermediate sensitive cell lines; H369P, Y253F and M244V cell lines showed less effective cell inhibition compared to other cell lines, indicating the low sensitive cell lines. It implies that each cell line does have its own inherent profile of resistance to double blockade (Fig C).

In addition, DAS and BOS seems to be better ABPIs for double blockade for intermediate to low sensitive mutations except the F317V mutation, which can be overcome with IMA or NIL combination. 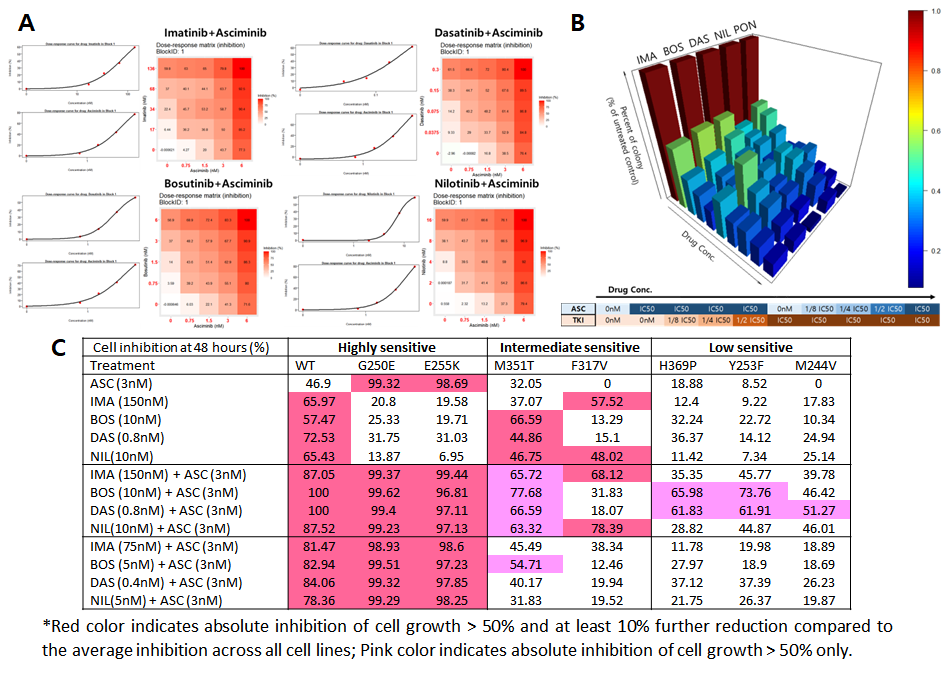