967 Transient M-Proteins: Epidemiology, Causes, and the Impact of Mass Spectrometry: The Istopmm Study

Among clinicians, it is well-known that the identification of a monoclonal(M) protein may disappear at a later timepoint (transient M protein) after certain infections, in the setting of some automimmune conditions, or other conditions. However, there is no information from a systematic study investigating patterns of transient M-proteins in a prospectively monitored cohort.The aim of this large, population-based study was to describe the epidemiology and characteristics of individuals with transient M-proteins in the prospective screening manner based on the Iceland Screens, Treats, or Prevents Multiple Myeloma (iStopMM) study. Furthermore, given the recent introduction of highly sensitive mass spectrometry (MS) based assays for the identification and quantification of M proteins, we were motivated to investigate whether transience is also related to an increased sensitivity of the assay used in a comparison with conventional serum protein electrophoresis (SPEP) and immunofixation electrophoresis (IFE).

The iStopMM study is an ongoing nationwide screening study for multiple myeloma precursors in Iceland. A total of 75,422 Icelanders ≥40 years old (51% of the population) were screened for M protein using SPEP and free light chains. Participants with a detectable M-protein entered a randomized controlled trial with three arms where arms 2 and 3 underwent initial testing and longitudinal follow-up. The transient M-protein cohort was defined as individuals with a positive SPEP who at a later timepoint returned a negative SPEP/IFE sample. Comorbidity data and prescription medicine use was acquired from three high-quality national disease and prescription medicine registries. MS (EXENT®, Binding Site, Birmingham, UK) analyses were performed on the original diagnostic sample and a follow-up sample with a cutoff of 0,02g/L considered as positive. We evaluated comorbidity and medication use comparing individuals with transient M protein to age- and sex-matched subjects with persistent M protein in a 4:1 matched nested case-control study. Differences between the groups were analyzed with chi square tests.

Overall, the iStopMM MGUS cohort comprises 3,358 individuals. Of those 2,037 underwent annual follow-up testing. A total of 198 (9.8%) individuals were identified as having transient M protein according to SPEP and IFE.

Among 198 individuals reported to have transient M protein according to SPEP and IFE, baseline MS samples were positive at in 183 (92%). The remaining 15 (8%) did not have an identifiable M protein on MS at baseline. Twelve (80%) of these 15 individuals had an active infection, autoimmune disorder, or active cancer at the initial measurement.

Of the 183 individuals who had M protein identified at baseline by both SPEP/IFE and MS, MS identified the same M protein in 70% (129/183) of the cases at follow-up when SPEP/IFE was negative.

Fifty four individuals were observed to be MS positive at baseline and negative at a follow-up testing indicating a prevalence of transient M-proteins of 2.6% within a cohort of MGUS patients when measured by MS. MS showed good concordance with IFE (Table 1), and, as expected, use of more sensitive MS in baseline samples results in additional increase by 33% in low-concentration M protein spikes, compared to conventional SPEP/IFE. 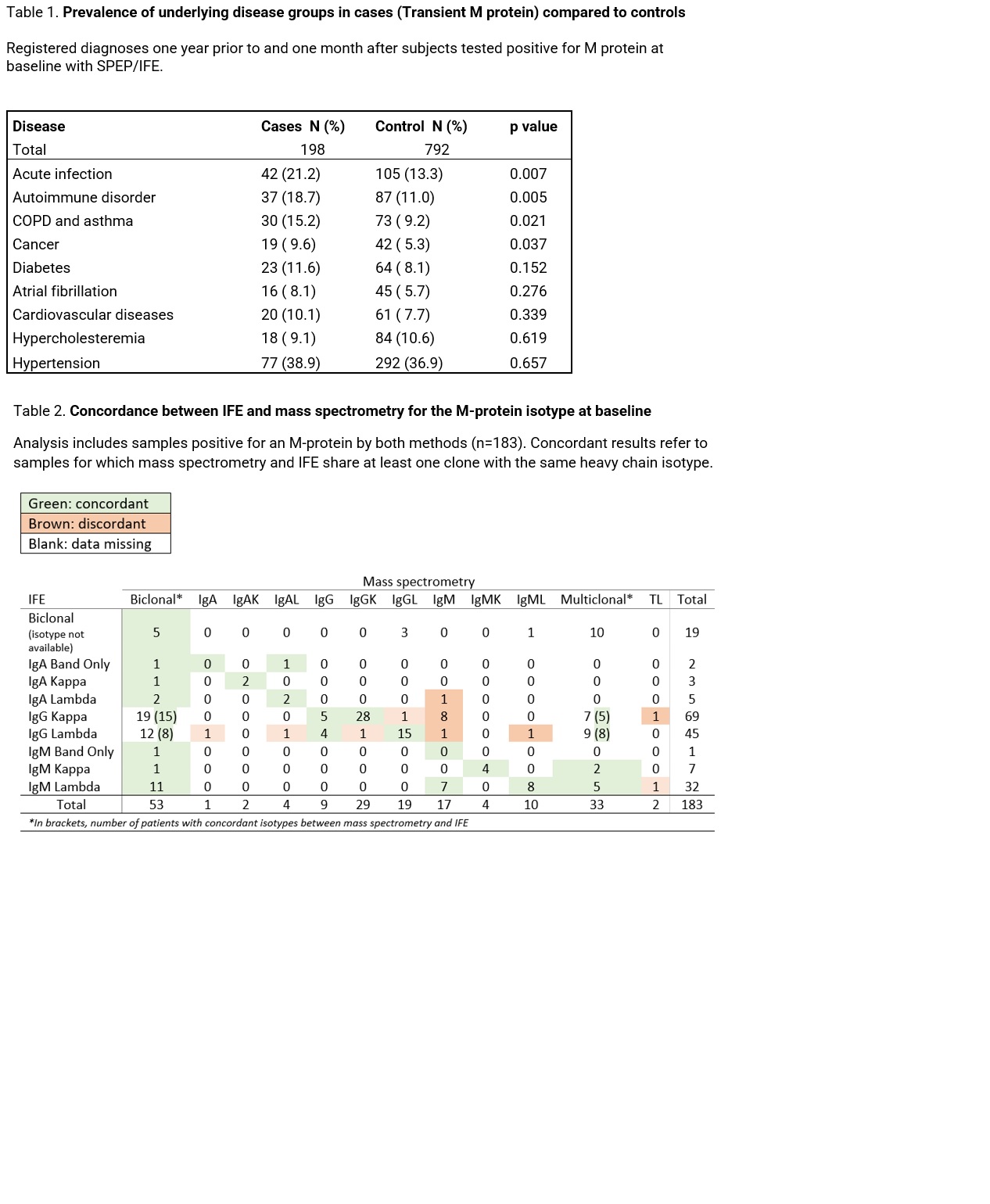