4526 How Does Treatment Intolerance Affect Survival in Patients with Multiple Myeloma (MM)?

MM is the second most frequent hematological neoplastic disease. Management of MM is moving toward long-term continuous regimens , but this approach is sometimes difficult to implement due to multiple factors including intolerance to treatment.

In this study, we aim to identify the factors associated with treatment intolerance and assess it impact on MM patient's outcome .

We analyzed data from the Australian and New Zealand (ANZ) and Asia-Pacific (APAC) Myeloma and Related Diseases Registry (MRDR). Newly diagnosed MM patients that have stopped their treatment were included. The patients are further classified according to whether they stopped the treatment due to intolerances or other reasons.

4454 patients diagnosed MM in the registry. Of these, 2753 ceased treatment. 313 stopped due to intolerance, 2313 stopped due to other reasons and 127 were not classified and therefore excluded from the analysis. Compared to others, patients who stopped treatment due to intolerance were older (Median age 74.7 years vs 64.3 years, p<0.001), tended to have advanced disease (38.9% ISS3 vs 30.4%, p=0.009), had poorer performance status (33.6% ECOG2-4 vs 17.3% ECOG2-4), and more co-morbidities such as moderate to severe cardiac disease (16.8% vs 8.2%, p=0.001), pulmonary disease (7.7% vs 3.7%. p<0.001) and diabetes requiring treatment (18.8% vs 11.2%, p<0.001). Consistent with the patient profile, a lower proportion of the intolerant patients underwent stem cell transplantation and bortezomib based treatment whereas more patients in the intolerant group had lenamidomide based treatment. Importantly, there was no clinically relevant difference in duration of treatment between the intolerant and tolerant group, although there was a lower proportion patients achieving a partial response or deeper in the intolerant group (74% vs 88.8%, p<0.001) .

On multivariate analysis, age was the predominant factor associated with intolerance, with the odds ratio increasing with age, whereas the use of velcade was relatively protective with an odds ratio of 0.33 (p<0.001). Patients who ceased treatment due to intolerance to treatment had shorter PFS (median PFS 36.8 months compared to 47.7 months, p<0.001) and OS (Median OS 47.5 months compared to 80.9 months, p<0.001). On multivariate analysis, intolerance to treatment itself was an independent prognostic factor. To remove the immortal time bias inherent in analyzing the effect of treatment duration on survival, we measured survival from the cessation of treatment. This analysis showed a shorter survival in the intolerant group (35.3 months compared to 68.4 months, p<0.001). When we added duration of treatment and depth of response to the multivariate model of survival, intolerance was no longer a significant prognostic factor, whereas depth of response was. Duration of treatment was also not significant [show table]

Intolerance to chemotherapy is associated with inferior survival, independent of potential confounding baseline variables associated with intolerance, in particular age and performance as well as chemotherapy regimen (ISS stage is not independently associated with an intolerant response once adjusted for age and performance status). The main reason for this appears to be reduced depth of response achieved. Optimizing treatment to achieve better tolerance and to increase chance of deeper response especially in the elderly, and those with comorbidities and poorer performance status, would be important in improving outcomes of MM patients. 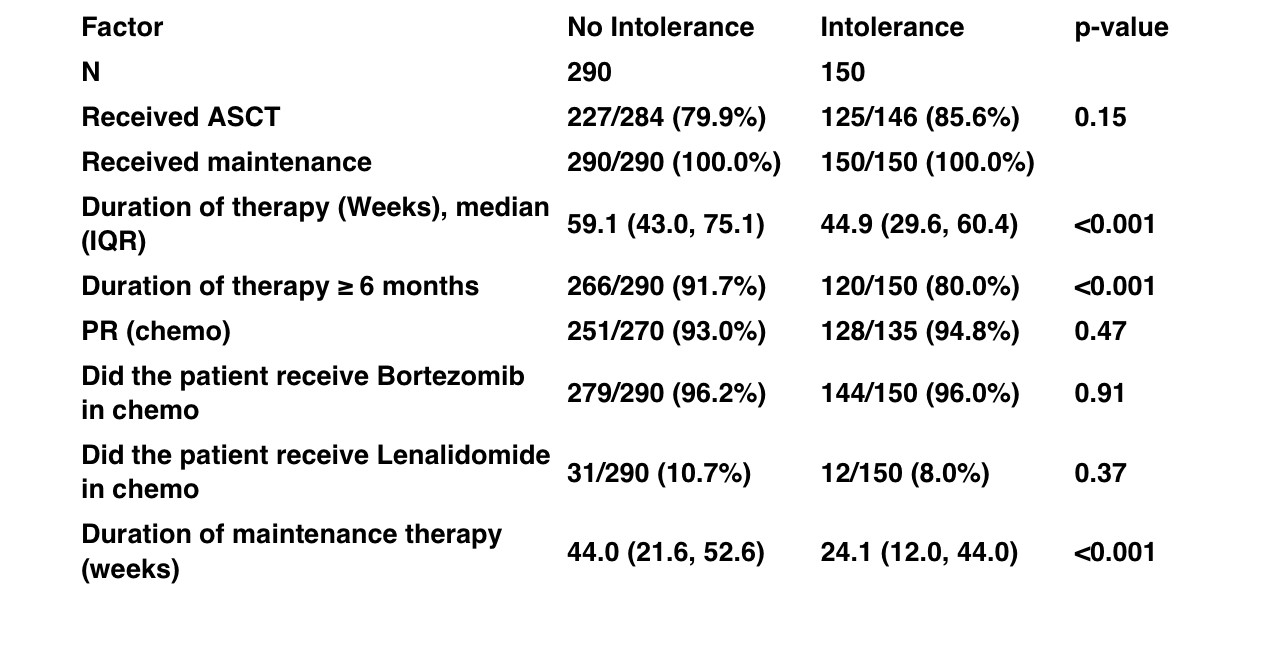