Acute graft-versus-host disease (aGvHD) is a major source of mortality following allogeneic hematopoietic cell transplantation (allo-HCT). Standard 1st line therapy for the treatment of aGvHD involves corticosteroids (CS). However, more than 50% of patients are refractory to CS (SR-aGvHD) and the associated mortality rate is of up to 80%. Recently, Ruxolitinib has been approved as 2nd line treatment for SR-aGvHD. However, patients with severe gastrointestinal (GI) aGvHD seem less likely to respond to Ruxolitinib and have poor outcomes with limited therapeutic options.

In this context, fecal microbiotherapy has shown promising results in several pilot studies in patients with refractory GI-aGvHD. Here we report clinical outcomes from 81 patients diagnosed with SR or dependent (SD) GI-aGvHD treated with the pooled allogeneic microbiotherapy MaaT013 as part of the Early Access Program (EAP) in France.

For each patient, a total of 3 MaaT013 administrations were planned every 7 +/- 2 days. Each dose comprised 30g of feces in 150 mL of diluent, from 4 to 8 healthy donors, administered by enema (except for 1 patient by nasogastric tube).

Treatment response was calculated among all treated patients based on aGvHD staging and grading at day 28 (D28) at the time of the EAP request.

MaaT013 displayed a good overall safety profile in the EAP population: 20 pharmacovigilance cases were reported in 18 patients: sepsis in 11 patients, C. difficile colitis in 2, E. coli osteoarthritis in 1, G. silvicola in stools from 1, P. aeruginosa sinusitis in 1, appearance of air bubbles in the mesorectum in 1, respiratory distress in 1. No pathogen transmission was reported. In 2 patients, non-pathogenic commensal bacteria isolated following infectious events were detected in the administered MaaT013 batch. Causality could not be formally excluded in these cases.

The overall incidence of bacteremia (14%) remains low, compared to an incidence of 31% to 74% in bloodstream infections reported in patients with GI-aGvHD. This suggests that fecal microbiotherapy may have a protective effect on bacterial translocation, but this needs to be confirmed in further clinical trials.

47 deaths have been reported; the cause of which was GvHD in 21 patients, severe infection in 13, relapse of underlying malignancy in 6, COVID-19 in 3, hemorrhage during surgery in 1, neurological complications post allo-HCT in 1, and cardiac arrest in 2 patients. No causality link with MaaT013 administration has been identified.

Overall, EAP clinical data showed that MaaT013 was safe and effective for the treatment of SR/SD-GI-aGvHD especially in patients having previously received ruxolitinib. Interestingly, GI-response to aGvHD correlates with increased OS, suggesting a strong favorable benefit-risk profile for MaaT013. A Phase 3 trial is currently ongoing to confirm these results in ruxolitinib-refractory patients (NCT04769895). 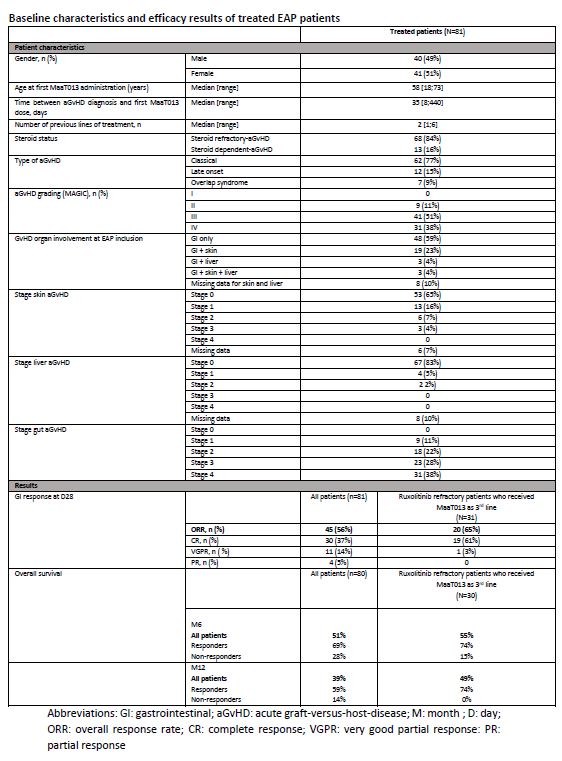