Introduction: Monoclonal gammopathy of undetermined significance (MGUS) is an asymptomatic plasma cell disorder that precedes the onset of multiple myeloma (MM) and other lymphoproliferative disorders. Detailed data on the prevalence and natural course of MGUS are key to understanding the risk of MGUS progression, as well as providing relevant clinical advice to individuals with MGUS on their personal risk and optimal follow-up strategy. Data on the prevalence of MGUS in the general population collected at the end of the 20th century have served as the key reference for physicians and researchers seeking to understand the epidemiology of MGUS in the general population. Nearly a quarter century later we are now able to use data from the Iceland Screens, Treats, or Prevents Multiple Myeloma (iStopMM) study to refine our understanding of MGUS further and provide a more detailed picture of the prevalence and characteristics of MGUS in a screened population.

Aims: Describe the population prevalence of MGUS by age and sex, the prevalence of individual immunoglobulin subtypes, and the distribution of risk groups.

Methods: The iStopMM study has screened 75,422 individuals, representing 51% of all Icelanders aged 40 and over at the time of study initiation. To detect and quantify monoclonal proteins, serum protein electrophoresis (SPEP) was performed on all samples followed by immunofixation electrophoresis (IFE) if a monoclonal spike was found or if the free light chain (FLC) ratio was abnormal. Age was based on the date of sample collection. We used these data to calculate the population prevalence of MGUS, age- and sex- standardized to the invited study population of all 148,704 individuals aged 40 and over living in Iceland at the start of the study. We calculated separate prevalence rates for the whole study group and for individuals over 50 to allow for direct comparison to prior studies. Then we plotted the prevalence in 10-year age groups by sex with 95% confidence intervals (CI). In a second graph we used 5-year age groups and plotted the prevalence of MGUS as well as of each of three subtypes of immunoglobulins, IgG, IgM, and IgA and multiclonal MGUS. Age groups over 85 were collapsed into one. We added cubic smoothing splines with bootstrapped 95% confidence intervals (CI) to both plots. Finally, we used the Mayo Clinic risk stratification model to assign all individuals diagnosed with MGUS to risk groups.

Discussion: The results presented here show an age- and sex- standardized prevalence of 5% among individuals over 50 years of age in the largest population-based screening study of MGUS among individuals of Western European descent to date. This is a higher population standardized prevalence of MGUS than previously reported for this age group, but this study confirms the pattern of higher prevalence with increasing age and male gender seen in other studies.

Our data show, for the first time, that IgA MGUS behaves in sharp contrast to other immunoglobulin subtypes, with prevalence rising slowly with advancing age, if at all after age 70. As previous studies show that immunosenescence involves an increased amount of overall IgA secretion, a phenomenon also observed in the iStopMM study (data not shown), it is important to consider several potential explanations, including that IgA M-proteins are more often transient, arise less frequently later in life, or are associated with a shortened lifespan. Follow-up data from the iStopMM study will provide further insights into this new discovery. 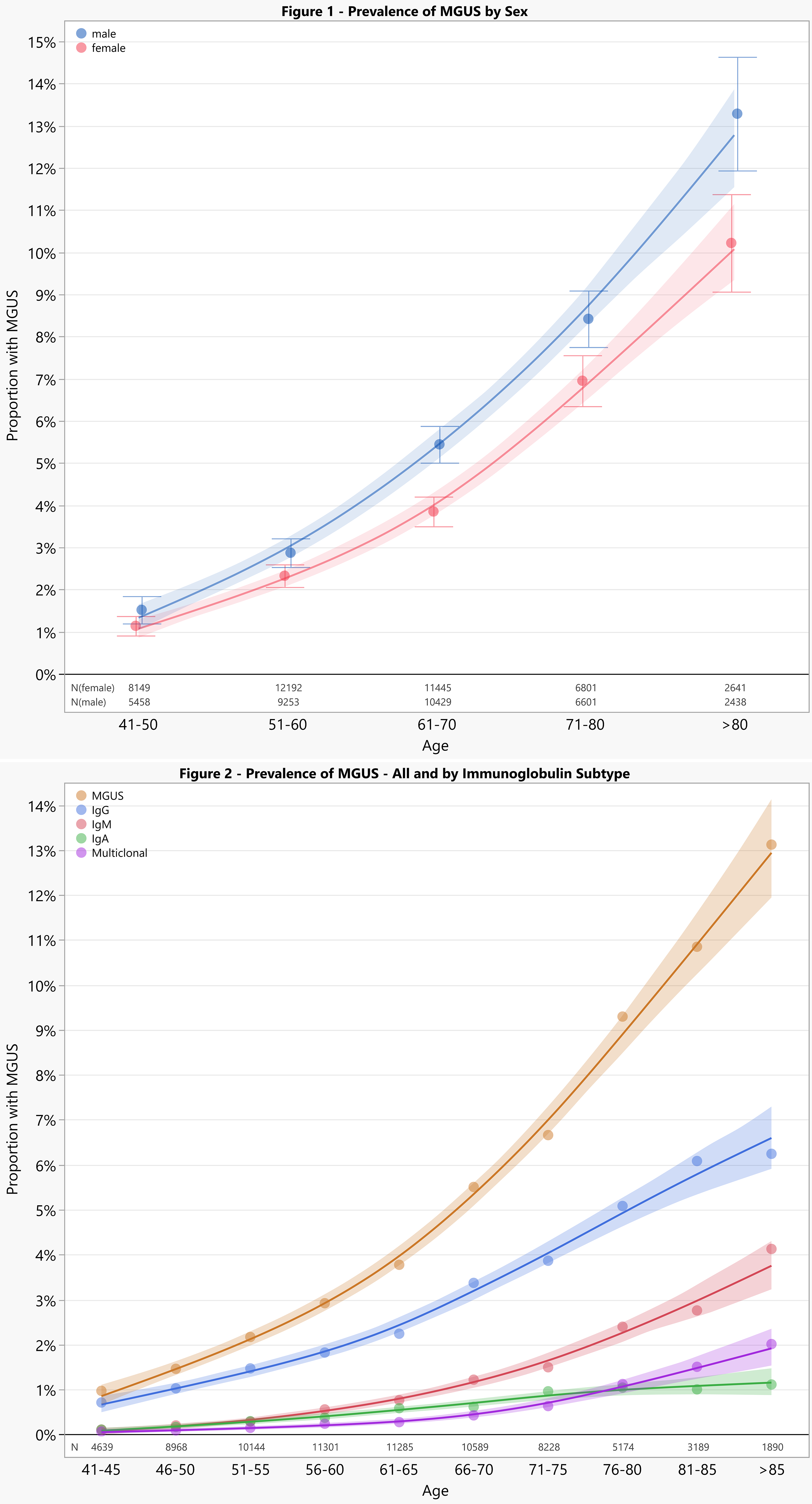