Methods The ongoing, prospective, open-label, 2-part, phase 1/2 BelaRd study (NCT04808037) aims to enroll 66 adult pts with TI NDMM. In Part 1 of the study (dose selection), 18 pts are randomized (1:1:1) in 3 cohorts to receive belamaf 2.5, 1.9, or 1.4 mg/kg doses by intravenous infusion once every 8 weeks (Q8W) plus Rd and the safety/tolerability of the combination is evaluated for pts with ≥4 weeks of follow up. As a safety review found no unexpected findings, an additional 6 pts were enrolled in each dose cohort to select the belamaf recommended phase 2 dose (RP2D). Part 2 (dose expansion; not initiated) will further evaluate the safety and clinical activity of belamaf RP2D plus Rd. Ocular assessments include best corrected visual acuity (BCVA), using Snellen chart and manifest refraction, and corneal exam using slit lamp microscopy. Ocular symptoms are classified by Common Terminology Criteria for Adverse Events and dry eye disease severity and vision-related functioning is assessed with the patient-reported Ocular Surface Disease Index (OSDI). In Part 1 of the study, severity of corneal events is assessed with the Keratopathy Visual Acuity scale. This descriptive analysis included all Part 1 pts from the BelaRd study (data cut-off: 24 June 2022).

Results Thirty-six pts were included in this analysis, who were followed up for a median of 9.5 months (range 3.2–15.4). At baseline (cycle 1 day 1), all pts had ocular comorbidities. During follow-up, most of OSDI assessments indicated that there was an impact of study treatment on activities of daily living (ADLs) ‘some’ or ‘none of the time’, while only <2.0% of OSDI assessments indicated the impact was ‘all’ or ‘most of the time’ (Table). The most common any grade (gr) ocular adverse events (OAEs) across cohorts were dry eye and visual acuity reduced. Gr 3 OAEs were observed only for visual acuity reduced, visual impairment, and cataract; no Gr 4 OAEs were observed. Belamaf doses skipped due to OAEs per the total number of planned belamaf administrations were 23/68 (33.8%), 15/73 (20.5%), and 10/69 (14.5%) in cohorts 2.5, 1.9, and 1.4 mg/kg, respectively. For the entire pt population, median times to resolution of keratopathy and BCVA change from baseline were 2.1 months (range 0.7–11.1) and 2.0 months (range 0.3–6.9), respectively; across cohorts, numerically similar median times to resolution were observed for each OAE

Conclusions No new ocular safety signals were observed with belamaf plus Rd in the upfront treatment of TI pts with NDMM; the observed OAEs were within the anticipated range with the use of belamaf. Keratopathy and BCVA change from baseline were resolved by a median of ~2 months; for each of these OAEs, similar times to resolution were recorded, across dose cohorts. Belamaf plus Rd had a minor impact on ADLs, with the patients receiving 1.4 and 1.9 mg/kg doses being the least impacted. 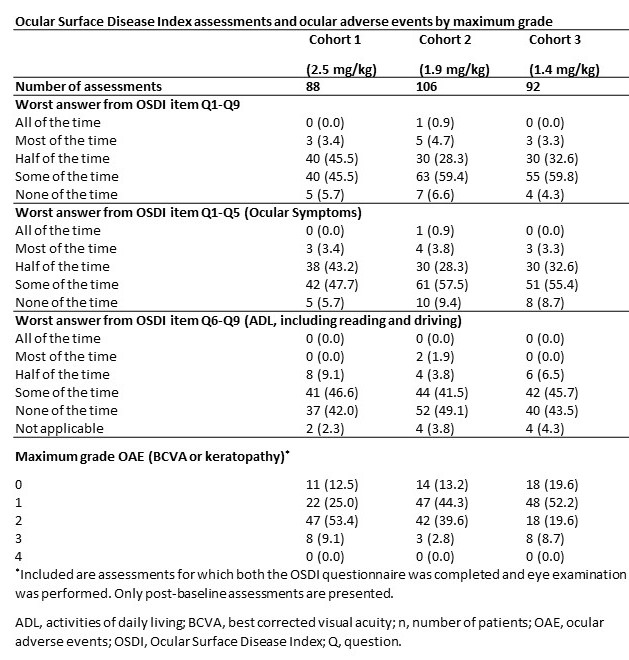