Methods: Of the 16 patients in the Phase1 study, frozen whole blood samples were evaluable in 15, from which RBC ghosts (membranes) at the different timepoints (baseline and following 2 weeks of treatment at each dose level) were isolated. Tyr-phosphorylation of Bd3 was analyzed by Western blotting using a specific phospho-Tyr Bd3 antibody. Ex-vivo experiments were conducted by treating RBCs from different HbSS patients with different concentrations (1 µM, 3 µM, 10 µM, and 30 µM) of mitapivat or AG-946, for 4 hours at 37°C. To investigate the effect of mitapivat on kinases and phosphatases, HbSS RBCs were treated with different concentrations of mitapivat in a combination or without Syk kinase inhibitor-fostamatinib (MedChemExpress). We measured the effect of mitapivat on ATP production in-vitro by treating HbSS RBCs with 30 µM mitapivat for 2h, 4h, 6h, and 8h. The ATP level was detected using CellTiter-Glo® 2.0 Cell Viability Assay (Promega). Meanwhile, the same samples were used to explore the effect of mitapivat on the expression of intact protein tyrosine phosphatase 1B (PTP1B) on the RBC membrane.

Results: A dose-dependent decrease in mean Bd3 Tyr-phosphorylation of 20%, 34%, 42%, and 42%, from baseline was observed in the 15 subjects, corresponding to ascending BID dose levels of 2 weeks mitapivat 5 mg, 20 mg, 50 mg, 100 mg, respectively; followed by a return to near baseline by EOS (Figure 1A). Consistent with the in-vivo data, ex-vivo treated HbSS RBCs also showed a dose-dependent decrease in Bd3 Tyr-phosphorylation after either mitapivat or AG-946 treatment (Figure 1B, C). Interestingly, combination of mitapivat with fostamatinib showed an enhanced effect on the reduction of Bd3 Tyr-phosphorylation compared with single drug treatment, which indicated that mitapivat may affect the activity of PTP1B (Figure 1D). Since the activity of PTP1B could be regulated by ATP, we then investigated the effect of mitapivat on ATP level. The ATP level was elevated after 6 hours’ mitapivat treatment, even after correction for cell number (Figure 1E). Concomitantly, the intact PTP1B associated with cell membrane also increased after 6 hours of mitapivat treatment (Figure 1F), which might explain the de-phosphorylation of Bd3.

Conclusion: A recent study showed that PTP1B is the major phosphatase that maintains Bd3 tyrosine in an unphosphorylated state (Noomuna et al, 2022). PTP1B could be cleaved into an inactive form by calpain, which needs to be activated by calcium. The balance of calcium in RBC relies on the activity of the plasma membrane Ca2+ ATPase (PCMA) pump, which is fueled by ATP. Our results suggest that in enhancing PKR activity, mitapivat leads to an increase in intracellular ATP which increases activity of the PCMA pump, and an increased efflux of intracellular calcium. A reduction in intracellular Ca2+ reduces the activity of calpain, and thereby suppresses calpain’s cleavage of phosphatase-PTP1B, resulting in reduction of Bd3 Tyr-phosphorylation. ATP increase is thus a key mechanism of mitapivat’s beneficial effect on the hemoglobin increase in SCD. 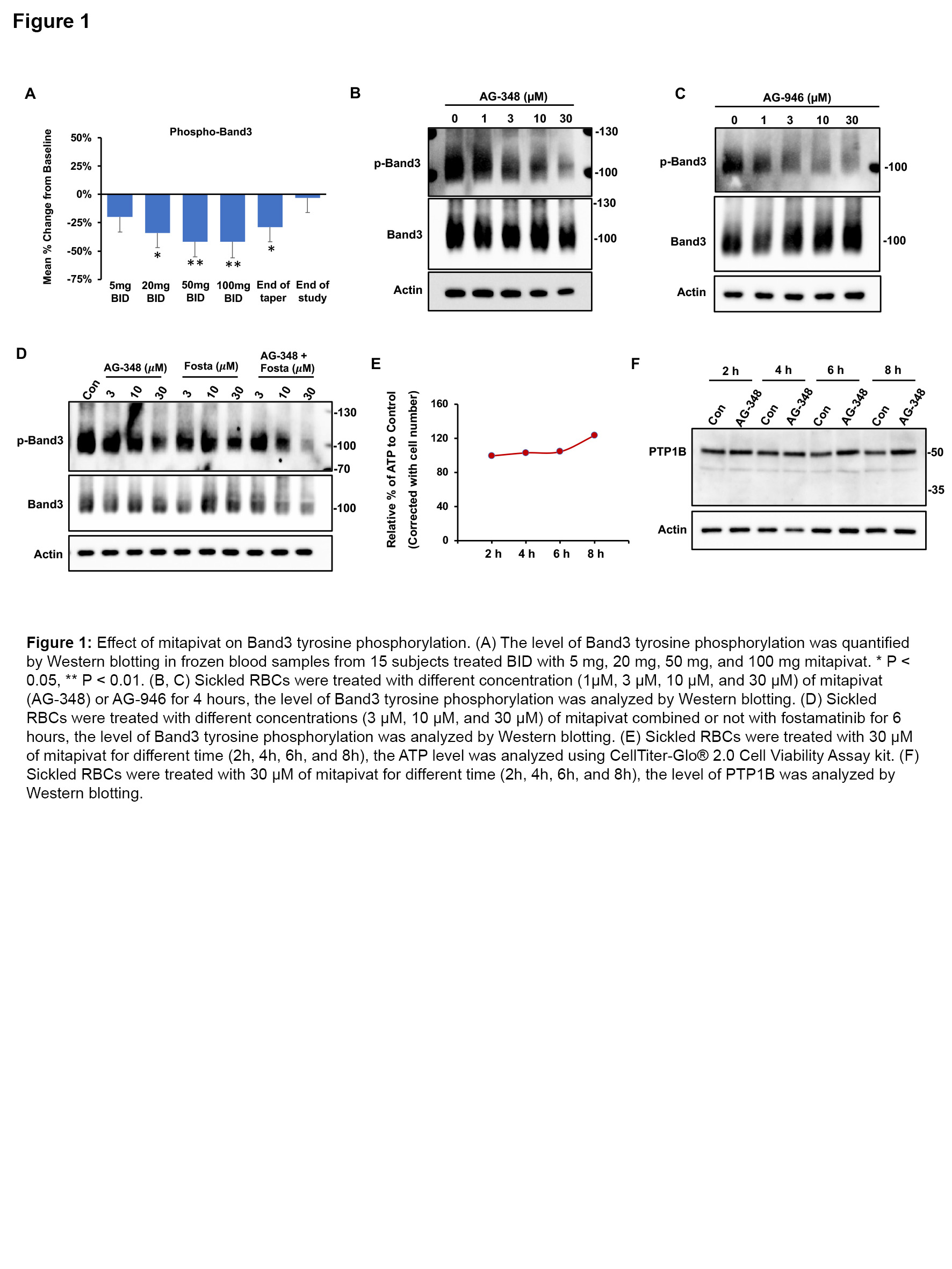