4592 The Pharmacokinetic and Pharmacodynamic Characterization of Mgta-117, an Anti-CD117-Amanitin Antibody-Drug Conjugate for Targeted Conditioning Prior to Transplant, in Nonhuman Primates

Background: Hematopoietic stem cell transplant is a highly effective and potentially curative treatment for malignant and nonmalignant blood disorders. However, current preparative conditioning regimens are nonselective and result in significant mortality and morbidities, including organ toxicity, infertility and secondary malignancies. To reimagine conditioning, we have developed a potent, antibody-drug conjugate (ADC) targeting CD117 (c-kit) conjugated with a stable linker to an amanitin payload. Upon binding to CD117, the ADC is rapidly internalized, undergoing lysosomal degradation and intracellular release of the amanitin payload, leading to apoptosis of quiescent and cycling cells. As such, MGTA-117 is rapidly cleared from blood via selective binding and internalization of CD117. In addition, the antibody component of the ADC is an antagonist of the natural ligand for CD117 (stem cell factor), providing a dual mechanism of target cell depletion. We have demonstrated that MGTA-117 is highly effective at depleting human CD117+ stem cells and precursors in vitro and in humanized NSG mice. In nonhuman primates (NHPs), we have determined that a single administration of MGTA-117 resulted in significant depletion of stem and progenitor cells in the bone marrow and peripheral blood reticulocytes, reflecting the depletion of erythroid precursors.

Objectives: To determine the dose and time relationship between dosing of MGTA-117 and the resulting depletion of bone marrow stem cells and peripheral reticulocytes utilizing an NHP model.

Methods: MGTA-117 was dosed at 0.05-3 mg/kg in NHPs to determine the timecourse of pharmacokinetic (PK) and pharmacodynamic (PD) conditioning responses within stem cell and blood populations. Tissue sample collection occurred prior to treatment and then up to 28 days post dose.

Results: Intravenous administration of MGTA-117 resulted in dose-dependent increases in exposures, with rapid rates of clearance at all dose levels. These observations are consistent with the expected target-mediated drug distribution profile, where nonlinear clearance is attributed to saturation of CD117 binding and internalization of the ADC. Even at the highest doses tested, MGTA-117 was cleared quickly and was below the limit of quantification in blood 10 days post dose. Greater than 90% depletion of CD34+/CD90+/CD45RA- stem cells within bone marrow were observed at 0.3 mg/kg and higher. The onset of stem cell depletion occurred as early as 7 days post dose, with recovery delayed until at least 21 days post dose. Robust depletion of blood reticulocyte counts was also observed, an indirect surrogate for the depletive effects of MGTA-117 on progenitors in the bone marrow. While the onset of reticulocyte depletion is similar to stem cells, the time to recovery correlates directly with the clearance of MGTA-117 below active concentrations.

Conclusions: MGTA-117 demonstrated potent single-agent activity with predictable and consistent PK-PD profile across a wide range of doses in NHPs. The rapid clearance of MGTA-117 from blood was consistent with saturation of CD117 binding and internalization. At doses of 0.3 mg/kg and higher, the observed PD responses within stem cells confirm targeted depletion of CD117 expressing populations, with durable depletion beyond the actual clearance of ADC. At all doses tested, depletion of blood reticulocyte populations was also observed, with the relative recovery correlated directly with the clearance of MGTA-117, and supported the hypothesis that reticulocytes are a blood biomarker for bone marrow depletion. The dose dependency of PD responses suggest that effective doses of MGTA-117 may require maintenance of receptor occupancy to confer the targeted cytotoxic effects. Mechanistic modeling of this predictable and potent profile in NHPs is supportive of predictions of biologic activity at low doses in humans. Overall, the rapid PK clearance and prolonged stem cell depletive responses provide an attractive profile that supports MGTA-117 for clinical development as a conditioning agent prior to transplant. 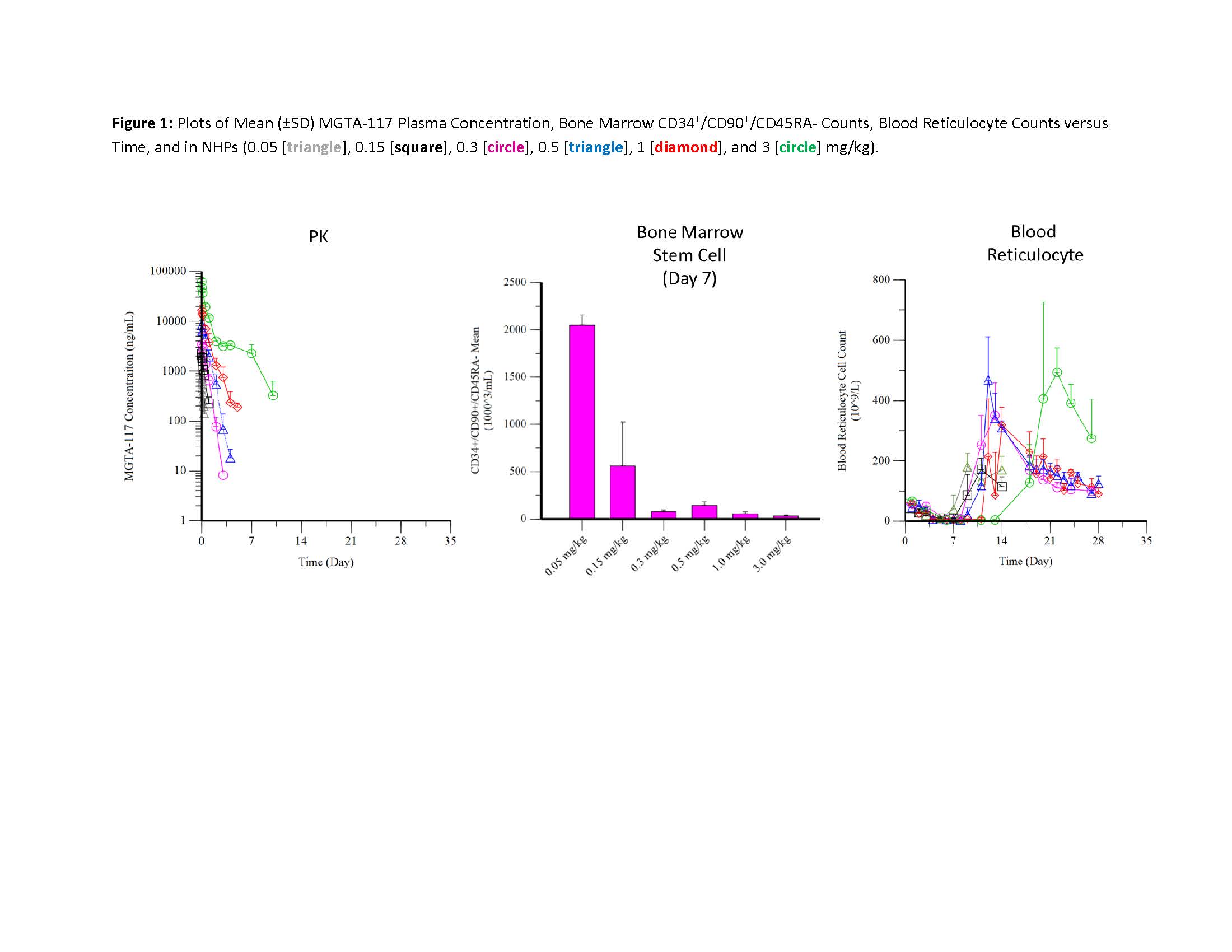