Background: Blockade of the cytokine IL-6 receptor by monoclonal antibodies, such as tocilizumab (TCZ), is a key strategy for the management of both CAR-T and T-cell dependent bispecific monoclonal antibody (TDB) induced cytokine release syndrome (CRS). Preclinical data indicate that inhibition of IL-6, IL-1, or TNF-α signaling prior to TDB administration can prevent development of CRS without any impact on anti-tumor activity (Li et al. Sci Transl Med 2019). To test this hypothesis in the clinic, a dedicated TCZ pretreatment arm was added to the ongoing GO39775 Phase I study (NCT03275103) of cevostamab, an FcRH5xCD3 TDB, to determine whether a single dose of TCZ administered prior to the first dose of cevostamab can reduce the incidence of CRS.

Methods: Patients (pts) who have RRMM for which no established therapy is available, appropriate or tolerable were enrolled in a dedicated TCZ pretreatment arm. Cevostamab was administered intravenously (IV) in a 21-day Cycle (C). A single 3.6mg priming dose was given on Day (D) 1 of C1 followed by a target dose of 90mg on C1D8 and then C2D1 and beyond. A single IV 8mg/kg dose of TCZ was administered as a pretreatment on C1D1 two hours prior to the administration of cevostamab. Patient data from the previously enrolled non-TCZ 3.6/90mg dosing arm served as a retrospective comparator. Pts in both arms received corticosteroid, antihistamine and acetaminophen premedication prior to cevostamab. CRS is reported using ASTCT criteria (Lee et al. Biol Blood Marrow Transplant 2019).

Consistent with preclinical data, no apparent negative impact on anti-tumor activity was observed. The overall response rate in the TCZ arm with 90mg target dose was 50% (13/26) [95% CI: 28.9-71.2] compared to 37.2% (16/43) [95% CI: 21.6-52.8] in pts receiving 90mg without TCZ pretreatment. Very good partial response or better (VGPR+) rates were 26.9% vs. 25.6%, respectively. Available pharmacodynamic data did not demonstrate any apparent change in measures of T-cell activation and proliferation in pts receiving TCZ pretreatment. Consistent with the known mechanism of action of TCZ, levels of C-reactive protein, a downstream product of hepatic IL-6 activation, were heavily suppressed in the vast majority of pts in TCZ arm suggestive of near-complete inhibition of the IL-6 signaling pathway.

Conclusions: Clinical data from the GO39775 study shows for the first time that TCZ pretreatment can significantly reduce the risk of developing TDB-induced CRS without an apparent impact on anti-myeloma activity. The data support additional investigation of the use of anti-cytokine pretreatment with the goal of substantially reducing the frequency and potentially the severity of CRS. 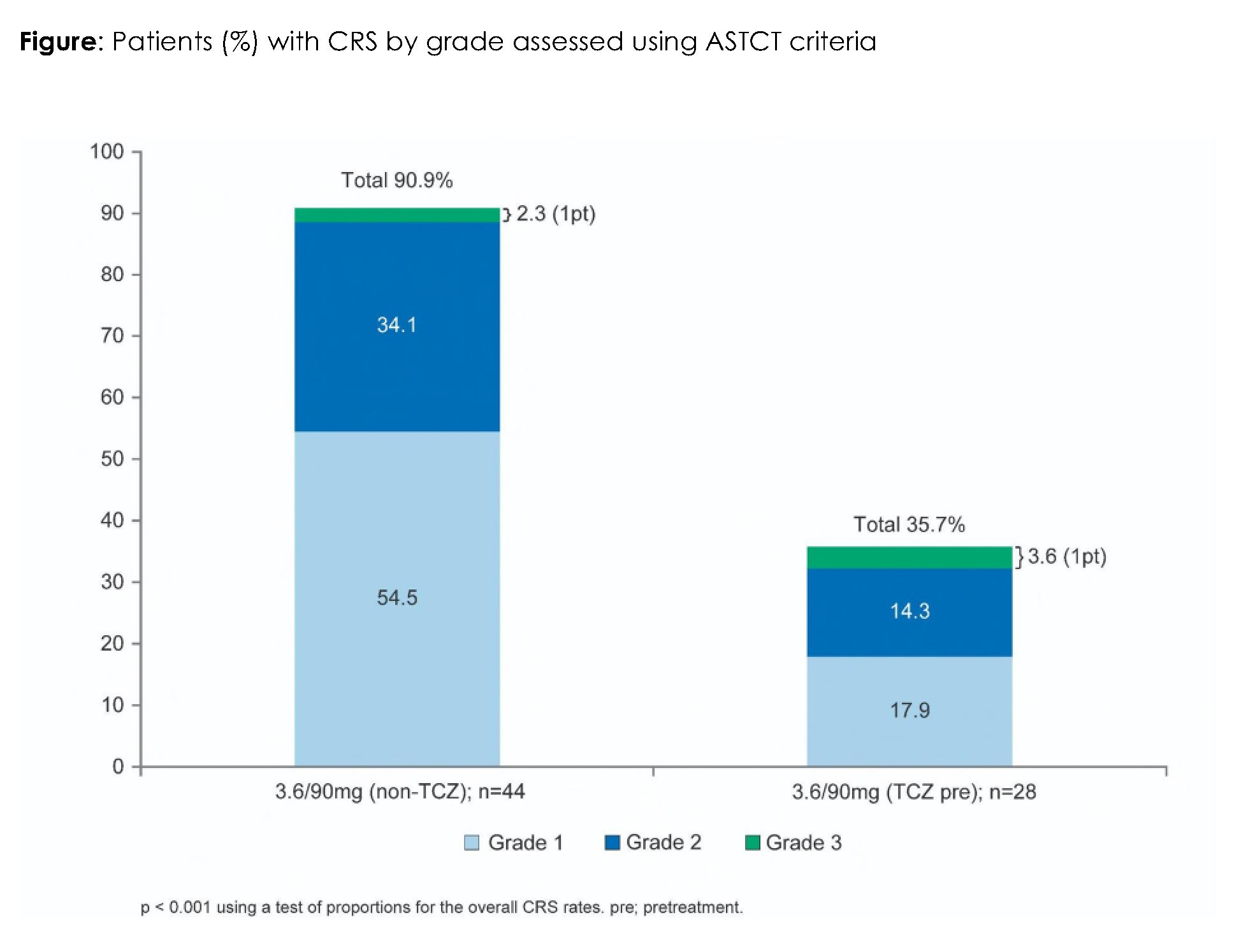