Introduction: Cilta-cel is a BCMA-targeting CAR T-cell therapy that was recently approved by the US FDA for the treatment of adult patients (pts) with relapsed/refractory multiple myeloma (RRMM) after ≥4 prior lines of therapy (LOT) including a proteasome inhibitor (PI), immunomodulatory drug (IMiD), and anti-CD38 monoclonal antibody. In the phase 1b/2 CARTITUDE-1 study, cilta-cel demonstrated deep and durable responses in heavily pretreated pts with RRMM. The ORR was 97.9%, and at a median follow-up of 28 months (mo) the DOR was not reached. Of the 97 pts, 61 were evaluable for minimal residual disease (MRD) negativity (clonoSEQ v2.0, Adaptive Biotechnologies), with 56 (91.8%) of these 61 pts achieving MRD negativity (10‑5) at any point. We sought to characterize the baseline and disease characteristics of pts with sustained MRD negativity (pts who continued to remain MRD negative ≥6 mo and ≥12 mo).

Methods: Eligible pts had MM and received ≥3 prior therapies or were refractory to a PI, and IMiD, and had received a PI, IMiD, and an anti-CD38 antibody. Pts received a single cilta-cel infusion (target dose 0.75x106 CAR+ viable T cells/kg) 5–7 days post lymphodepletion. MRD negativity was a secondary objective of the phase 2 part of CARTITUDE-1 and was assessed on bone marrow samples at baseline; day 28; and 6, 12, 18, and 24 mo using next-generation sequencing, regardless of disease status. An additional sample was collected and assessed at the time of suspected complete response and every 12 mo until progressive disease (PD) for pts who remained on the study. Evaluable samples passed calibration and quality control and included sufficient cells for evaluation at 10-5 testing threshold. Characteristics were analyzed in pts who had MRD negativity <6 mo, or sustained ≥6 mo and ≥12 mo. Pts who did not achieve MRD negativity at any time point were considered to be MRD positive. Landmark analyses were conducted at 6 and 12 mo to address immortal time bias.

Conclusions: Based on our descriptive analysis, pts receiving cilta-cel achieved MRD negativity irrespective of their high-risk cytogenetics and ISS status, number of prior LOT and penta-drug refractoriness. While MRD negativity alone (<6 mo group) did not appear to provide PFS benefit when compared to MRD positive pts, the small number of pts in the MRD positive group prevents comparisons with those who achieved MRD negativity. Presence of extramedullary plasmacytoma at baseline, and time since diagnosis might be factors that impact achievement of sustained MRD negativity. These data suggest that while cilta-cel is effective for a broad range of pts, specific pt and disease characteristics may be associated with sustained MRD negativity and better long-term outcomes. 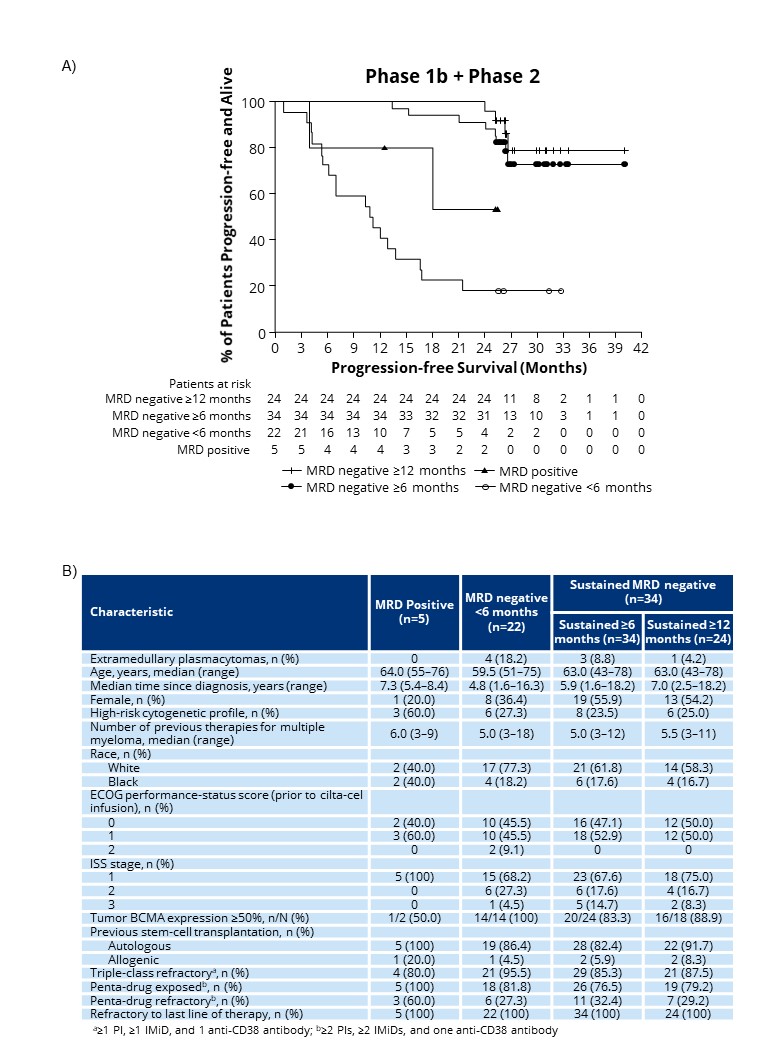