The CD20xCD3 T-cell-engaging bispecific monoclonal antibody, glofitamab, has a novel 2:1 (CD20:CD3) configuration with bivalency for CD20 on B cells and monovalency for CD3 on T cells. Obinutuzumab pretreatment (Gpt) is given 7 days prior to the first dose of glofitamab to mitigate the risk of cytokine release syndrome (CRS).

Phase I/II (NCT03075696) data for glofitamab monotherapy with step-up dosing (SUD) and Gpt (1000mg or 2000mg) have shown high response rates and manageable, mostly low-grade CRS in patients with R/R MCL, most of whom had prior BTKi therapy (Phillips et al. ASH 2021). Here, we report on the durability of response with glofitamab SUD in a larger cohort with additional follow up.

Conclusions: Fixed-duration glofitamab monotherapy after Gpt (1000mg or 2000mg) induced high and durable CR rates, the majority of which were achieved early, in heavily pretreated patients with MCL, most of whom had prior BTKi therapy and thus a particularly poor prognosis. CRS events were manageable and mostly low grade. This is one of the largest datasets and longest follow-ups reported with a CD20xCD3 bispecific monoclonal antibody for patients with R/R MCL. 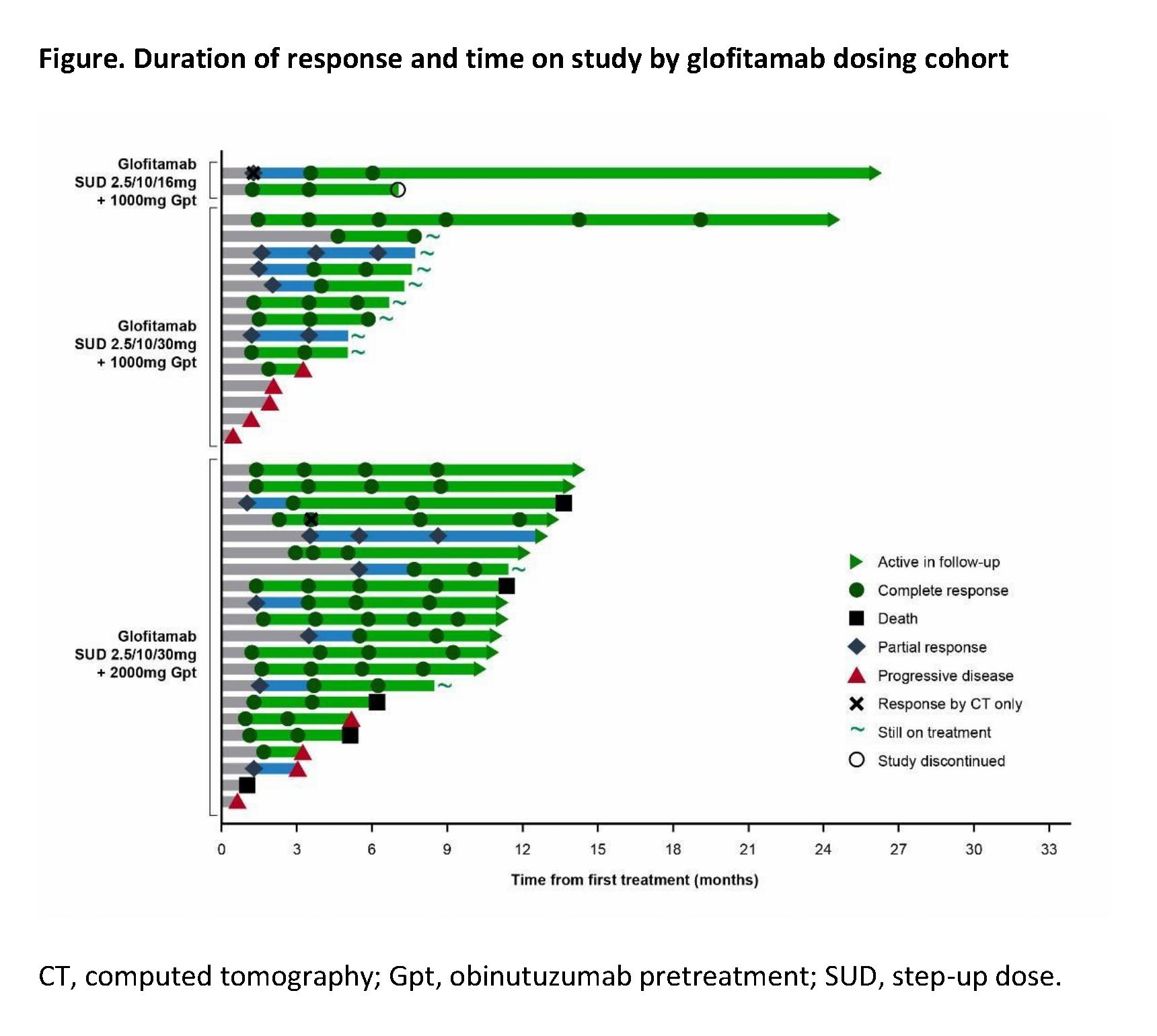 OffLabel Disclosure: Glofitamab is a full-length, humanized immunoglobulin G1 bispecific monoclonal antibody with a 2:1 (CD20:CD3) configuration that facilitates bivalent binding to CD20 on B cells, and monovalent binding to CD3 on T cells. Glofitamab redirects T cells to eliminate normal and malignant B cells. Glofitamab is an investigational agent. Obinutuzumab (Gazyva) is a CD20-directed cytolytic antibody indicated: in combination with chlorambucil, for the treatment of patients (pts) with previously untreated CLL; in combination with bendamustine followed by obinutuzumab monotherapy, for the treatment of pts with FL who relapsed after, or are refractory to, a rituximab-containing regimen; in combination with chemo followed by obinutuzumab monotherapy in pts achieving at least a PR, for the treatment of adult pts with previously untreated stage II bulky, III or IV FL.

See more of: 623. Mantle Cell, Follicular, and Other Indolent B Cell Lymphomas: Clinical and Epidemiological I
See more of: Oral and Poster Abstracts
<< Previous Abstract | Next Abstract >>
*signifies non-member of ASH