105 Sars-Cov-2 Vaccinations Do Not Lead to Progression of Monoclonal Gammopathy of Undetermined Significance: Results from the Population-Based Istopmm Screening Study

In patients with monoclonal gammopathy of undetermined significance (MGUS), the pre-malignant cells are antibody producing plasma cells. Stimulating humoral immunity mediated by plasma cells is an important factor in vaccine efficacy. Therefore, concerns have been raised about whether vaccine administration in patients with MGUS could trigger progression of the underlying pre-malignant clone, leading to an increase in the monoclonal-(M)-protein or even progression to full-blown malignancy. Immune stimulation has been found to be a risk factor for monoclonal gammopathies. However, immune stimulation inherent to vaccines and the subsequent antibody formation by plasma cells has, to our knowledge, not been studied in a systematic manner in MGUS. The current SARS-CoV-2 pandemic provide a unique opportunity to evaluate if SARS-CoV-2 vaccination has an impact on the risk of progression from MGUS to MM, or not.

To study this we performed a prospective nationwide study based on the Iceland Screens, Treats, or Prevents Multiple Myeloma (iStopMM) study.

The iStopMM study screened a total of 75,422 individuals for M protein and free light chains (FLC) between September 2016 and December 2020. The study diagnosed 3,358 individuals with MGUS and then randomized them to one of three arms. Individuals in arms 2 and 3 (N=2,037) are followed longitudinally with repeated serum protein electrophoresis (SPEP) and FLC and comprise the study population.

Comparing M protein levels pre- and post-vaccination showed a 1.9% increase in M protein concentration in males and 0.3% in females. However, there was no difference in the rate of M protein increase following vaccination compared to that observed before vaccination. This was true for both men and women (Figure A).

In this large, prospective, population-based, screening study including 1,814 individuals with MGUS who were observed before and after covid vaccinations, we found no evidence for MGUS progression after SARS-CoV-2 vaccination. The same was true when analyzed separately by sex, age, type of vaccine, and the number of doses given. Our findings indicate that SARS-CoV-2 vaccination is safe in individuals with MGUS and does not lead to progression irrespective of the number of vaccine doses administered and type of vaccine used. 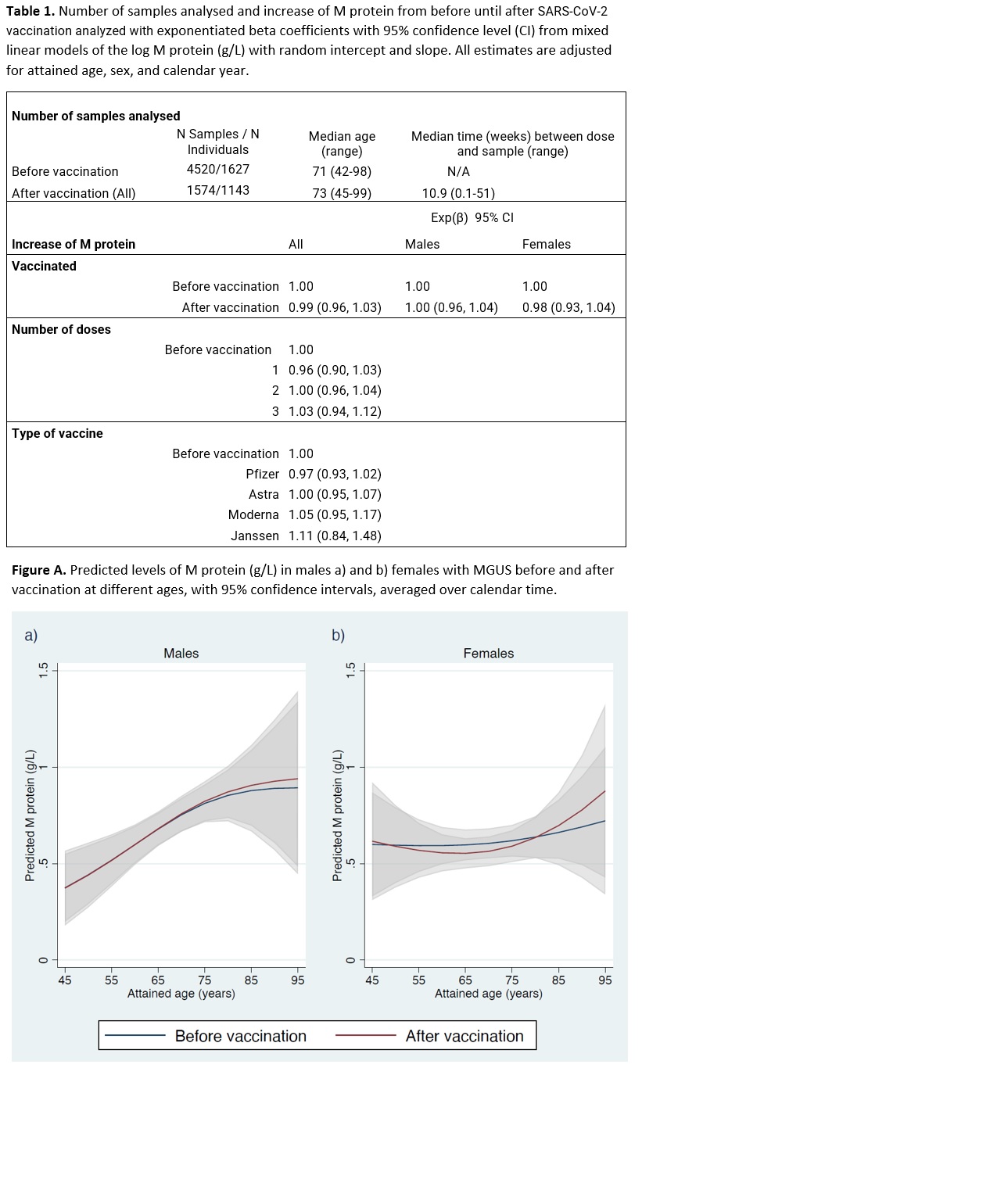