Background: Von Willebrand disease (VWD) is the most common inherited bleeding disorder, affecting 1% of the population, and characterized by deficient or defective von Willebrand factor (VWF). Among women and girls with VWD, up to 80% have heavy menstrual bleeding (HMB), many of whom have iron deficiency anemia with reduced physical functioning, anxiety, depression, and poor quality of life. Yet the lack of effective therapies for HMB in VWD remains a major unmet healthcare need: in up to 30% of patients, desmopressin, hormonal therapy, or tranexamic acid (TA) may be poorly tolerated or ineffective. Intravenous VWF concentrates, including plasma-derived VWF (pdVWF) and recombinant VWF (rVWF), safely reduce bleeds in VWD, but there are few data and no prospective trials of VWF concentrate in HMB. As rVWF has higher purity and longer half-life than pdVWF, single dose use at the onset of menses may be feasible. We, therefore, conducted a randomized crossover trial comparing rVWF with TA, the recommended non-hormonal agent, in reducing HMB in women and girls with VWD.

Methods: The VWDMin trial was an NHLBI-funded U01 outpatient phase III prospective, multicenter, randomized, crossover trial, comparing intravenous rVWF (Vonvendi®), provided by Takeda, with oral TA (Lysteda®) in reducing HMB in VWD, clinicaltrials.gov, NCT02606045. Inclusion criteria were women 13-45 years of age with VWD, VWF:RCo<0.50 IU/mL, and HMB defined as pictorial blood assessment chart PBAC >100 in one of the last two cycles. Exclusion criteria were hypothyroidism, past thrombosis, and renal disease. After consent, subjects were randomized 1:1 to rVWF 40 IU/kg IV day 1 or TA 1300 mg po three times daily days 1-5 in each of two consecutive menstrual cycles. The order of drugs was determined by randomization: Group 1, rVWF in cycles 1 and 2, and TA in cycles 3 and 4; Group 2, TA in cycles 1 and 2, and rVWF in cycles 3 and 4. A rVWF 40 IU/kg rescue dose was allowed on day 2 of cycles in which rVWF was given. The primary endpoint was pictorial blood assessment chart (PBAC) score, measured for each cycle of treatment. Secondary endpoints included cycle severity, cycle length, and quality of life measured by SF-36, Ruta Menorrhagia Severity Score, CDC-Health-Related Quality of Life (HRQoL-14), and Center for Epidemiology Studies Depression (CES-D) Scale. Safety was assessed by number of rescue doses, other bleeding, thrombosis, and allergic reactions. PBAC after rVWF and TA was compared by a linear mixed-effects model, fit using restricted maximum likelihood estimation, estimating treatment effects by least-squares means. Continuous and categorical secondary outcomes were analyzed by linear mixed-effects models. Statistical analyses were performed using R v.4.1. The first patient was enrolled 02/12/2019 and the trial closed 02/15/2022 for slow enrollment and a conditional power calculation indicating a low probability of reaching a conclusion of efficacy. Of 45 screened, 39 were randomized, of whom 36 subjects received study drug and completed the trial; three withdrew prior to the first treatment cycle.

Conclusion: In this randomized, crossover trial, in which each subject served as her own control, rVWF was inferior to TA in reducing HMB by absolute PBAC score, with no differences in cycle severity, cycle length, or QoL. 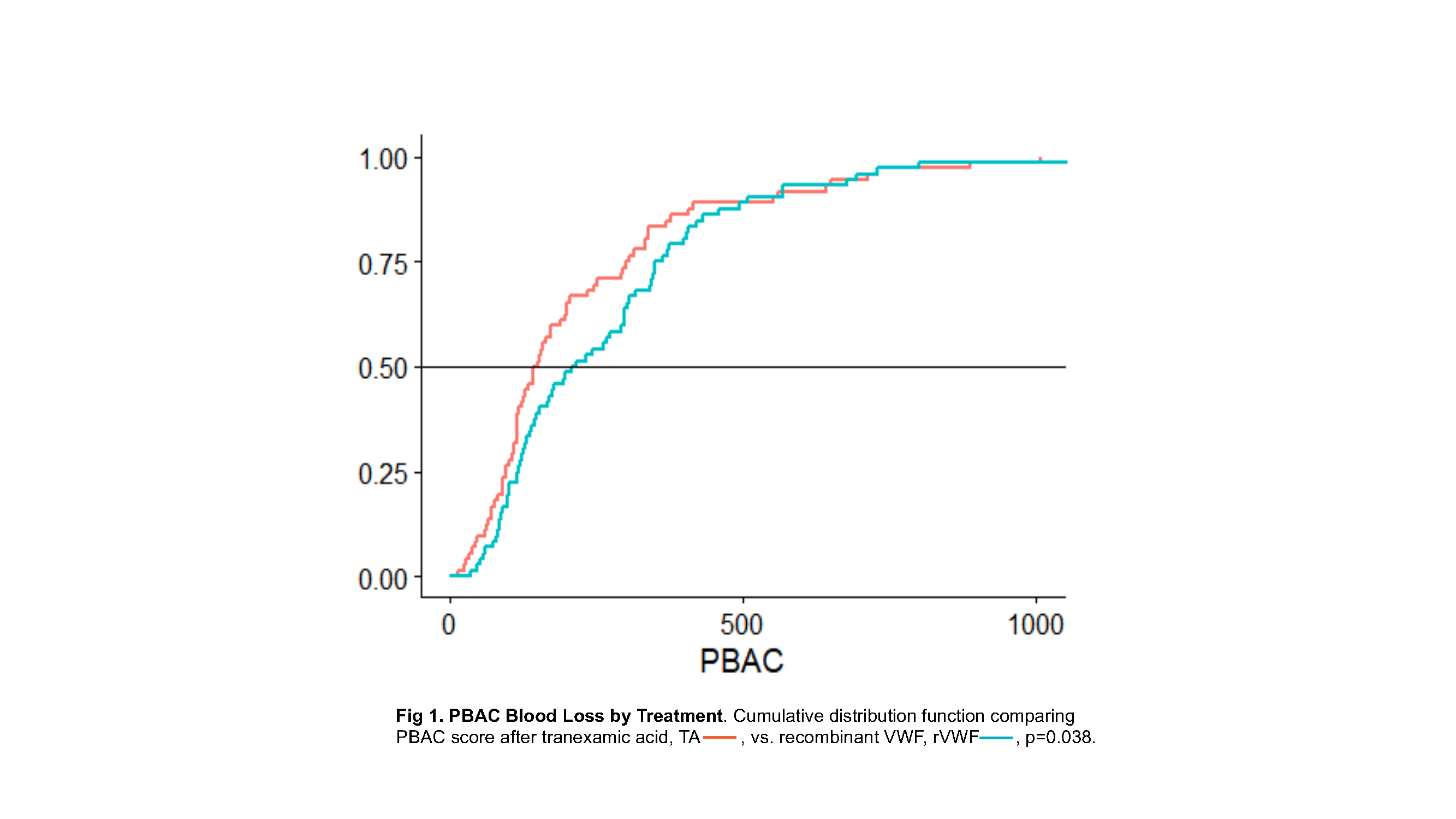 See more of: 322. Disorders of Coagulation or Fibrinolysis: Clinical and Epidemiological: Von Willebrand Disease and Other Congenital and Acquired Bleeding Disorders
See more of: Oral and Poster Abstracts
<< Previous Abstract | Next Abstract >>
*signifies non-member of ASH