Methods- Silica-free extracellular DNA was purified with the PAXgene™ Blood DNA Kit. Contact activation in plasma was measured by monitoring the cleavage of the substrate S2302. To study the contact independent activation of plasma clotting by extracellular DNA, 1.5 µM Corn Trypsin Inhibitor (CTI) was applied to the plasma. Next, acceleration of fibrinogen polymerization by thrombin in presence of extracellular DNA was measured by monitoring the absorbance of 350 nm. Interaction of DNA with fibrinogen and thrombin in phosphate buffer was determined by CD spectroscopy.

Results- Our results show that silica-free extracellular genomic DNA is a weak activator of the contact pathway of coagulation [Fig-A]. Moreover, genomic DNA accelerated the plasma clotting even when the contact pathway was inhibited with CTI indicating a contact independent mechanism of the procoagulant activity of extracellular DNA. Interestingly, the presence of extracellular DNA accelerated the polymerization of fibrinogen in presence of thrombin [Fig-B]. A bell-shaped dose-response curve for extracellular DNA indicates a likely template mechanism in which both thrombin and fibrinogen could assemble on the DNA molecule. These results are supported by the results from the CD spectroscopy studies where an alteration of the structure of fibrinogen and thrombin can be noticed in presence of extracellular DNA. Confocal studies further corroborate this observation. Our results also show different nucleic acids activate coagulation via different pathways. 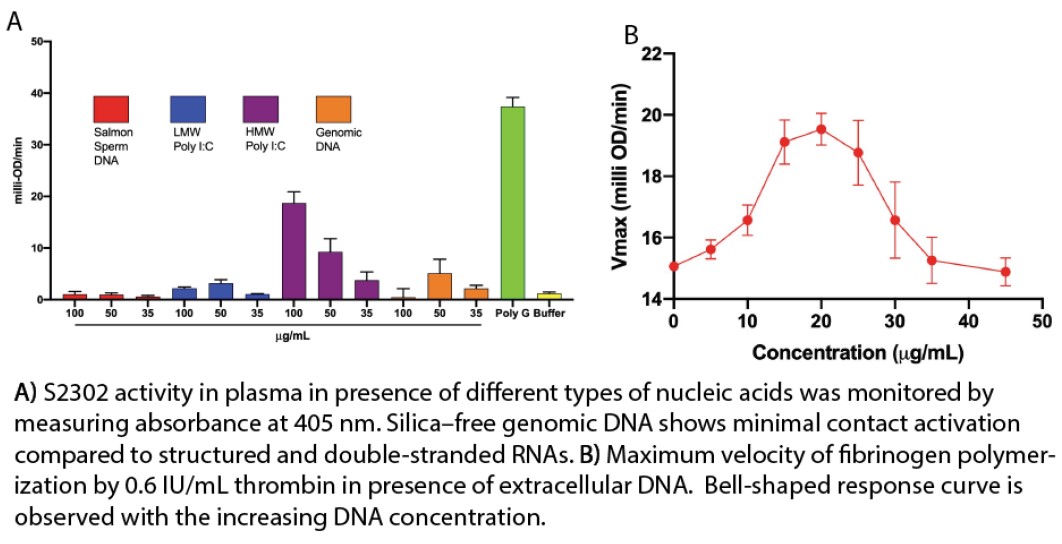