Introduction: Randomized trials comparing direct oral anticoagulants (DOACs) to low molecular weight heparin demonstrated higher rates of bleeding associated with DOACs, especially in patients with gastrointestinal (GI) malignancies. DOACs differ in location of absorption with apixaban predominately absorbed in the distal small bowel and proximal colon and edoxaban, rivaroxaban and dabigatran absorbed in the proximal GI tract (e.g. stomach and proximal small intestine). No comparative data is available for the DOACs in treatment of cancer-associated thrombosis (CAT). Given the differences in location of absorption, we aimed to assess the association of bleeding in patients with GI malignancy and CAT on apixaban versus those treated with proximally absorbed DOACs (dabigatran, edoxaban, or rivaroxaban).

Methods: Using a nationwide cohort of Veterans, we identified patients with active GI malignancy between 2012 and 2018. Using a previously validated algorithm (91% positive predictive value), we identified patients with newly diagnosed VTE. A VTE was considered to occur in the setting of active cancer if the diagnosis occurred (1) within 3 months before cancer diagnosis, (2) within 6 months after cancer diagnosis, or (3) any time after diagnosis of metastatic cancer. We limited the cohort to patients who received at least a 30-day prescription for anticoagulant therapy with apixaban, dabigatran, edoxaban or rivaroxaban. Patients with a prescription for any anticoagulant therapy within 6 months before VTE diagnosis were excluded. We retrospectively followed patients to 30-days after the last DOAC prescription or to death, whichever came first. The primary outcome of interest was clinically significant bleeding while on DOAC therapy. We defined clinically significant bleeding as the presence of an ICD-9 or ICD-10 code for bleeding in any position for an inpatient admission with 3 exceptions: microscopic hematuria, bleeding related to major trauma and metromenorrhgia. We assessed the association between DOAC use and bleeding as a time-to-event outcome while adjusting for the competing risk of non-bleeding related death through the methods of Fine and Gray.

Results: Between 2012 and 2018, a total of 215 patients with GI malignancies received a DOAC for treatment of CAT. Eighty-six patients received apixaban and the remaining 129 received a proximally absorbed DOAC with the majority receiving rivaroxaban (80%). Baseline demographics by anticoagulant therapy are listed in Table 1. None of the clinical variables assessed were significantly different between patients on apixaban versus a proximally absorbed DOAC, including variables associated with risk of anticoagulant-related bleeding.

Conclusion: In this study of 215 patients with GI malignancy, we found no significant difference in the risk of bleeding between patients treated with apixaban versus those treated with a proximally absorbed DOAC. The rate of clinically significant bleeding was high (20%) while on DOAC therapy. There is a continued need for future prospective studies evaluating antithrombotic therapy in patients with GI malignancies and CAT. 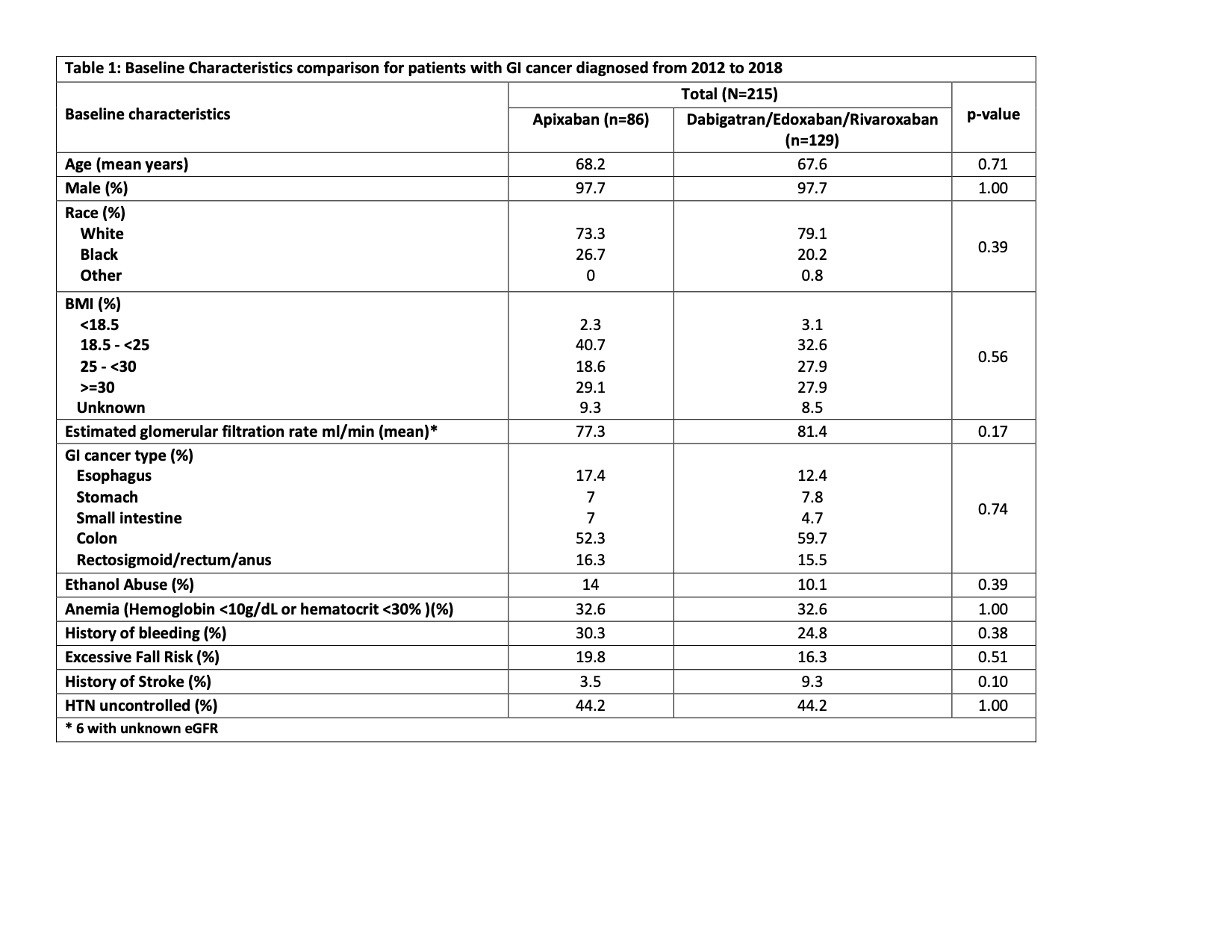