Eligible patients had relapsed/refractory MM, with ≥ 10% plasma cells in the bone marrow by CD138 IHC, and measurable disease. CD8+ and CD4+ T cells were enriched by To assess the discrete impact of the GSI on plasma cell BCMA expression, patients received a GSI (JSMD194) monotherapy “run-in” consisting of three oral doses (25 mg) administered 48 hours apart over 5 days. A bone marrow sample was obtained on day 5 and BCMA expression was compared to baseline. Following lymphodepleting chemotherapy, BCMA CAR T cells were infused at a starting dose of 5 x 107 CAR+ cells, in combination with JSMD194 dosed orally at 25 mg thrice weekly for three weeks, starting on the day of CAR infusion.

From June 2018 to March 2021, 18 patients underwent leukapheresis, run-in with JSMD194, and treatment with BCMA CAR T cells. The median age was 65 years, and patients had received a median of 10 prior lines of therapy (range, 4-19). 67% of patients were refractory to lenalidomide, pomalidomide, bortezomib, carfilzomib, and daratumumab, 72% had high-risk cytogenetic features, and 28% had extramedullary disease. 7/18 (39%) had prior BCMA targeted therapy; other BCMA targeted CAR T cell products had previously been administered to 4/18 patients (22%). All 18 treated patients completed the 5-day run-in with JSMD194. After three oral doses of GSI, increased from a median of 610 to 9563 receptors per cell, or a median of 12-fold (range, 0.2-fold to 157-fold; Figure 1). The only patient that did not demonstrate an increase in BCMA ABC after GSI run-in had previously received BCMA targeted therapy and BCMA expression at screening was virtually absent. 5 patients were treated at 5x107 CAR+ cells, 3 were treated at 15x107 CAR+ cells, 3 were treated at 30x107 CAR+ cells, and 7 were treated at 45x107 CAR+ cells dose levels. Treatment was consistent with other BCMA CAR T therapy, with manageable toxicities. One patient experienced a DLT. 95% of patients experienced cytokine release syndrome (CRS), mostly grade 1-2 (83%), and 66% of patients experienced ICANS, predominantly grades 1-2. The overall response rate was 89%, with 14 patients achieving ≥ VGPR, and 8 patients achieving CR (including 5 with sCR). Deep responses were observed at all dose levels; including the first patient treated on trial at (dose level 1) who has maintained a stringent CR (sCR) for over 35 months and 3 of 5 patients at dose level 1 had no evidence of progressive disease for >18 months. With a median follow-up of 20 months, the median PFS is 11 months (95% CI, 6 mos to not reached). Amongst patients without prior exposure to BCMA targeted therapy (n=11), the median PFS has not been reached, while amongst those previously exposed to BCMA targeted therapy (n=7), the median PFS was 2 months.

In this study combining a GSI with BCMA CAR T cells, we have demonstrated that the combination is safe and tolerable. GSI administration routinely increased BCMA surface density on plasma cells. Further, we have observed durable, rapid responses in a heavily pretreated refractory population of MM patients, of whom a significant proportion had prior treatment with BCMA targeted therapy and CAR T therapy. The combination of BCMA CAR T and GSI may augment anti-tumor activity, even when very low doses of BCMA CAR T cells are administered. 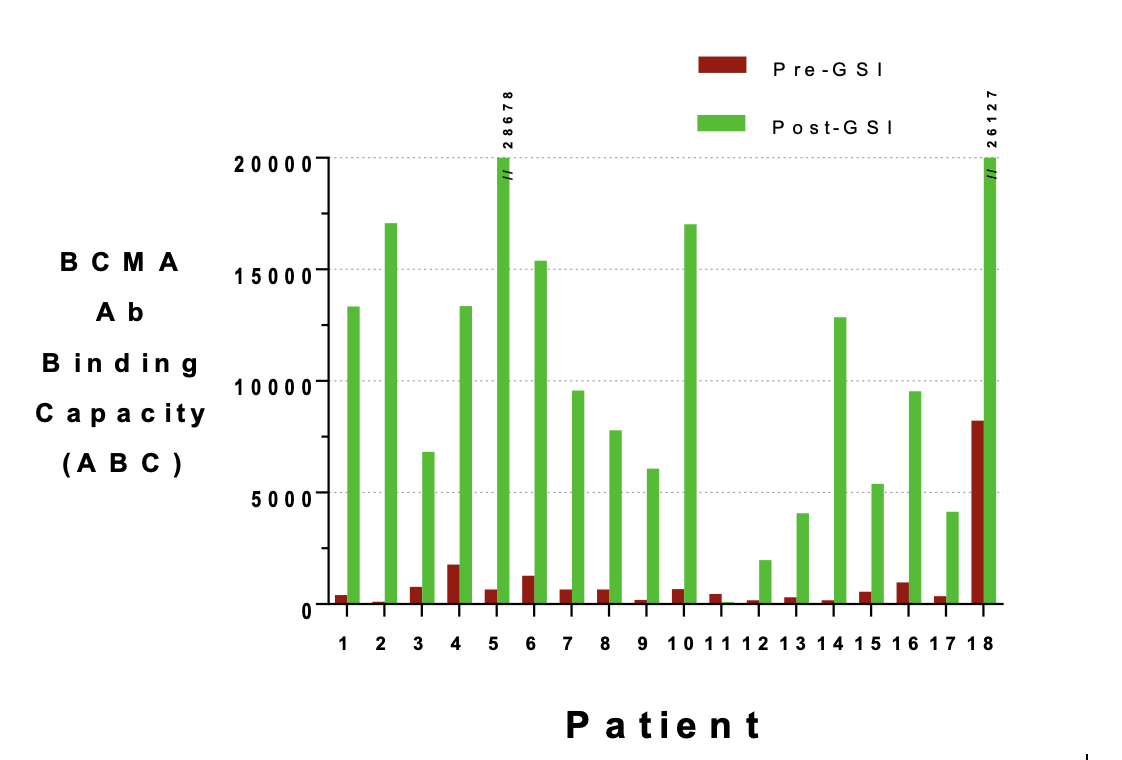