Introduction: Therapy related myeloid neoplasm (t-MN) is a rare but devastating complication of cytotoxic therapy used for management of unrelated malignancy or autoimmune diseases. Therapeutic options for t-MN are limited and although hypomethylating agents (HMA) are frequently used, the benefit of it in t-MN is unclear. There are no prospective trials of HMA in t-MN and published experience is based on retrospective analysis of small number of cases (n=42 to 54). The aim of this study was to assess the efficacy of HMA therapy in t-MN patients and evaluate predictors for it.

Methods: t-MN patients managed with first line HMA therapy were analyzed. This study was approved by the participating institutional review board. Criteria for inclusion were a pathologically confirmed diagnosis of t-MN based on WHO 2016 criteria, age >18 years, and ≥1 cycle of decitabine or azacitidine.

At the time of analysis further treatment details were available for 78 patients and outcome of these patients were compared with primary MDS (p-MDS) and oligoblastic AML managed at the same institute. Completion of six-cycles of HMA (50% vs. 62%; P=0.07) and overall response rate (47 vs. 50%, P=0.22) was not significantly different between t-MN and p-MDS. However, median OS of t-MN was significantly poor compared to p-MDS (10 vs. 20 months, P=0.0004; Figure 1A).

In t-MN patients treated with HMA as the first-line agent, median OS was significantly shorter in t-AML compared to t-MDS (7 vs.10 months, P=0.04; Figure 1B). Median OS was significantly shorter in patients with TP53Mut and complex karyotype (Figure 1C-D). In Cox proportional hazard analysis, t-AML and complex karyotype were independently associated with poor outcome.

Conclusion: This study demonstrates significantly poor outcome of t-MN patients treated with HMA therapy as first line. The outcome is particularly poor in t-AML and patients with complex karyotype and TP53Mut. Hence there is urgent need for clinical trials of novel therapies for t-MN. 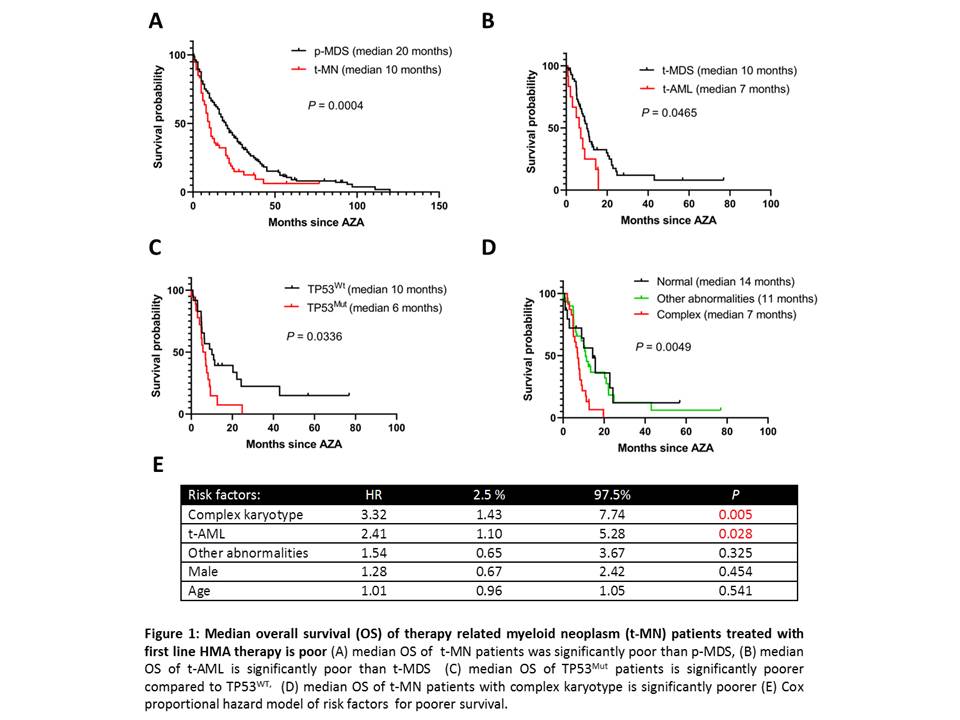