Background: Blinatumomab is highly effective therapy for both the treatment of relapsed/refractory B-cell acute lymphoblastic leukemia (ALL) and persistent or recurrent measurable residual disease (MRD) after initial ALL therapy. We hypothesized that early incorporation of blinatumomab in patients (pts) with newly diagnosed Philadelphia chromosome (Ph)-negative B-cell ALL would lead to deeper and more durable responses, reduce relapses, and improve survival.

Methods: Pts 14-59 years of age with newly diagnosed Ph-negative pre-B-cell ALL, including pts who had received no more than 1 prior cycle of chemotherapy, were eligible. Pts were required to have a performance status of ≤3, total bilirubin ≤2 mg/dl, creatinine ≤2 mg/dl, and no significant CNS pathology (with the exception of CNS leukemia). Pts received hyper-CVAD alternating with high-dose methotrexate and cytarabine for up to 4 cycles, followed by 4 cycles of blinatumomab at standard doses. Pts with CD20+ disease (≥1% cells) received 8 doses of ofatumumab (2000 mg) or rituximab (375 mg/m2). Eight administrations of prophylactic IT chemotherapy were given in the first 4 cycles. Maintenance was with alternating blocks of POMP (given in maintenance cycles 1-3, 5-7, 9-11, and 13-15) and blinatumomab (given in maintenance cycles 4, 8, and 12). Beginning with pt #10, those with high-risk disease features (e.g. CRLF2+ by flow cytometry, complex karyotype, KMT2A rearranged, low-hypodiploidy/near triploidy, TP53 mutation, or persistent MRD) started blinatumomab after 2 cycles of hyper-CVAD.

Results: 38 evaluable pts have been treated. 6 pts were in complete remission (CR) at enrollment and unevaluable for morphologic response. Pt characteristics of the 38 evaluable pts are summarized in Table 1. Median age was 37 years (range, 17-59 years). At least one high-risk feature was present in 21 pts (55%), including TP53 mutation in 27%, CRLF2+ in 19%, and an adverse-risk karyotype in 32%. 84% of pts received ofatumumab or rituximab.

With a median follow-up of 27 months (range, 11-55 months), the 3-year continuous remission and OS rates were 80% and 83%, respectively (Figure 1). Overall, 5 pts (13%) relapsed, 13 (34%) underwent allogeneic SCT in first remission (including 2 additional pts who relapsed post-SCT), 1 died in CR (possible pulmonary embolism), and 19 (50%) remain in continuous remission and are currently on treatment or have completed maintenance. All relapses occurred in pts with established poor-risk features and no relapses have occurred beyond 2 years from the start of treatment. OS with hyper-CVAD plus blinatumomab compares favorably to a historical cohort of pts treated with hyper-CVAD plus ofatumumab (3-year OS 83% versus 66%, respectively; P=0.2).

Conclusion: Hyper-CVAD with sequential blinatumomab is highly effective as frontline treatment of Ph-negative B-cell ALL, with an overall MRD negativity rate of 97% and a 3-year OS rate of 83%. This study shows the potential benefit of incorporating frontline blinatumomab into the treatment of younger adults with ALL and also shows that reduction of chemotherapy in this context is feasible. 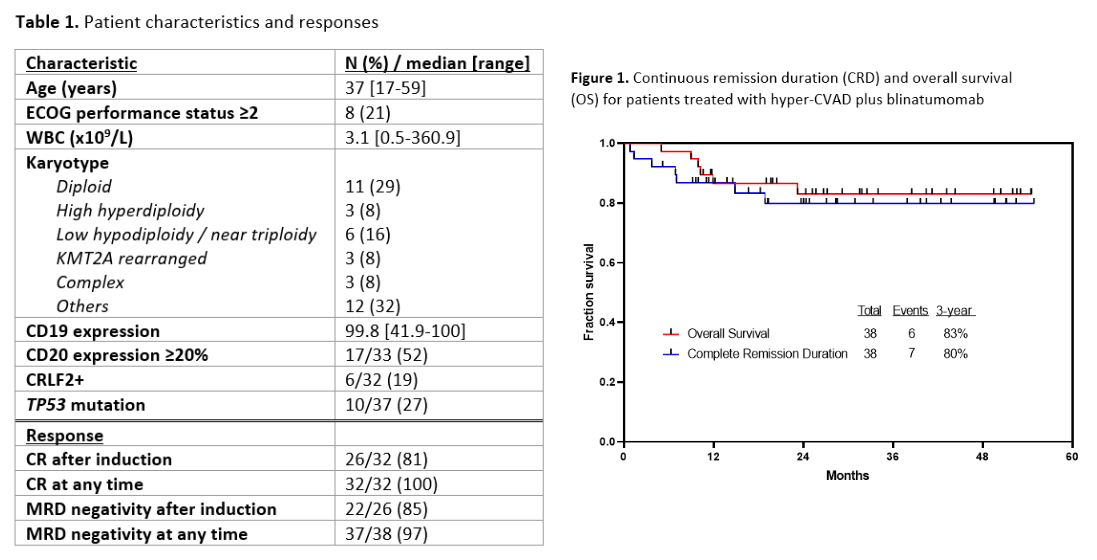 OffLabel Disclosure: Blinatumomab in the frontline setting for B-cell ALL