778 High Rate of Recurrent Venous Thromboembolism Is Children with Sickle Cell Disease and History of VTE: Analysis of the Trinetx Research Network Database

Background: Sickle Cell Disease (SCD) is associated with a chronic prothrombotic state that increases the risk of venous thromboembolism (VTE). The rate of VTE in hospitalized children with SCD is nearly 2%, substantively higher than the 0.2-0.6% rate seen in the general pediatric population.1-3 The frequency and risk factors associated with the development of recurrent VTE in this population are vastly unknown. This knowledge gap hinders the development of disease-specific guidelines for the management and secondary prevention of VTE in pediatric SCD.

Aim: To investigate the frequency of recurrent VTE in children birth to 21 years of age (inclusive) with SCD and history of prior VTE.

Methods: We analyzed patient-level data from the TriNetX Research Network Database, a global federated network of electronic medical record (EMR) data from 42 health care organizations. Children ≤21 years of age with a diagnosis of SCD and history of VTE between January 1 2008 to March 31 2021 were included in the analysis. Index VTE was defined as the first diagnosis of VTE in the patient’s EMR. Recurrent VTE was defined as an acute VTE diagnosis that occurred 90 days after the index VTE discharge date in a different anatomic location from the index VTE. Patient demographic and clinical characteristics were summarized using counts and percentages. Missing values were not imputed. Overall, one year and five-year recurrence VTE are reported with the corresponding 95% confidence intervals (CI).

Results: A total of 119 children with SCD and VTE were included. Table 1 shows the patients baseline characteristics. Mean age at the time of index VTE diagnosis was 16.7 years (standard deviation 5.5 years). The majority of patients were Black (87%) and female (61%). The most frequent index VTE diagnosis was pulmonary embolism (42%) followed by lower (23%) and upper (22%) extremity VTE. Of the 119 patients,10 (8.4%, 95%CI=4-15%) developed recurrent VTE within 1-year and 25 (21.0%, 95%CI=14-29%) developed recurrent VTE within 5-years from index VTE. Compared to patients without recurrent VTE, patients with recurrent VTE were more frequently female (50% vs. 68%, respectively), and slightly older (mean age 16.6 years vs. 17.2 years, respectively). The most frequent anatomic location for VTE recurrence was the upper extremity (32%)

Conclusions: This retrospective database analysis identified, for the first time, high rates of recurrent VTE of 8.4% and 21% at 1- and 5-years post-VTE in children with SCD. These rates stand in contrast with the 3% VTE recurrence at 1-year reported for the general pediatric VTE population.4 Further analyses of the database are ongoing to identify risk factors for recurrent VTE in this population. These initial findings highlight the need for cooperative multicenter prospective studies to reliably establish rates of- and prognostic factors associated with recurrent VTE in children with SCD, in order to generate evidence for disease-specific treatment guidelines, and to inform future prognostically-stratified interventional trials designed to optimize VTE outcomes in pediatric SCD. 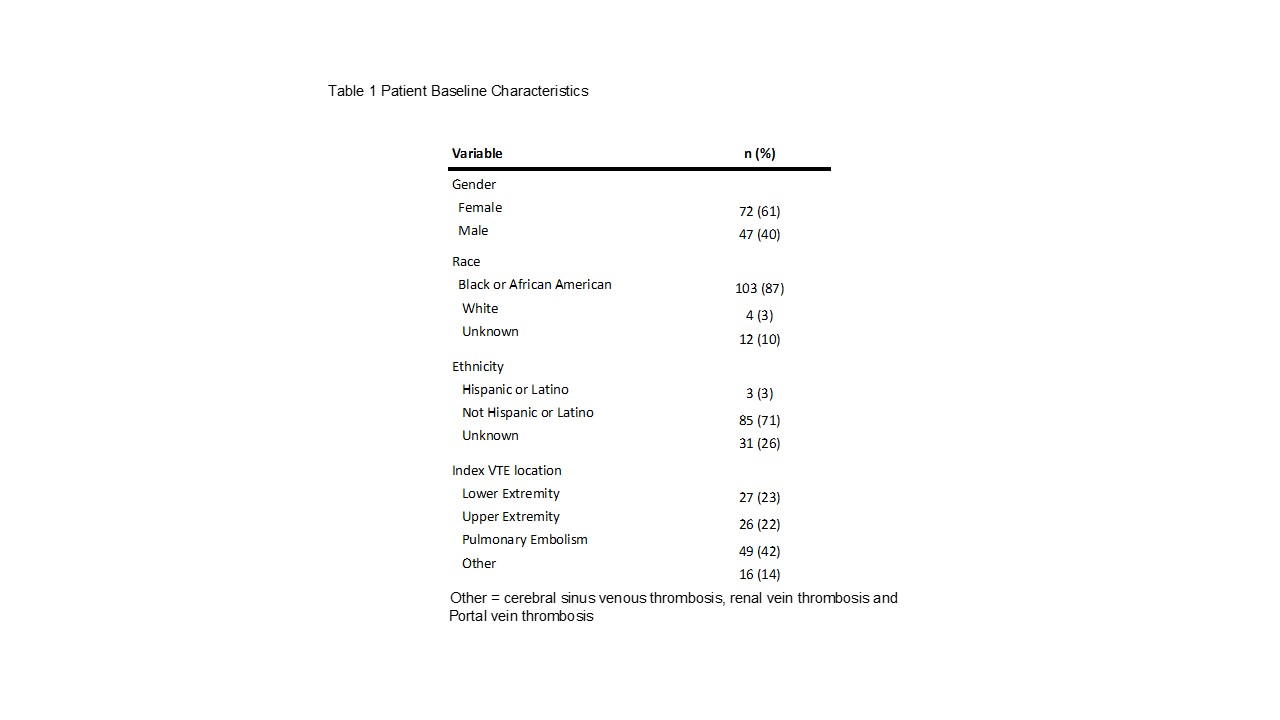