Idiopathic multicentric Castleman disease (iMCD) is a heterogeneous and life-threatening hematologic disorder with unknown etiology. It involves extensive lymphadenopathy with characteristic histopathology, inflammatory symptoms, and life-threatening cytokine-driven multi-organ failure, if inadequately treatment. Diagnosis requires the presence of histopathological, clinical, laboratory, and radiologic findings as well as exclusion of other related diseases including infectious, autoimmune, and lymphoproliferative disorders. Despite these guidelines, definitive diagnosis remains challenging as histopathological changes, clinical features, and laboratory abnormalities are non-specific. Given that iMCD can be aggressive and life-threatening, timely diagnosis is crucial, and specific diagnostic biomarkers are needed. Interleukin-6 (IL-6) is a known disease driver in a portion of patients, but it is not consistently elevated at diagnosis and characterization of other cytokines has not been systematically performed. Previously, a plasma proteomics study identified upregulation of multiple cytokines, including several chemokines, such as C-X-C Motif Chemokine Ligand 13 (CXCL13) and C-C motif ligand 21 (CCL21), during disease flare in a small cohort. We sought to investigate whether these findings would be replicated in a larger cohort and to identify cytokines that could help to improve diagnosis of iMCD.

Herein, we analyzed serum samples from 88 iMCD patients, 42 healthy donors, and 20 patients each with rheumatoid arthritis (RA), Hodgkin lymphoma (HL), and a subtype of multicentric Castleman disease caused by infection with human herpes virus 8 (HHV8+MCD). 1300 analytes were quantified by SomaLogic SOMASCAN; Uniprot database was used to select the 159 quantified cytokines for analysis. Data were log2 normalized and capped at the 2.5th and 97.5th percentiles. Linear models were used to identify significant differences among disease groups, with p values adjusted by Benjamini & Hochberg. Hierarchical clustering was performed using complete linkage.

Of the 159 cytokines quantified, 54 (34%) were identified as significantly different between iMCD and healthy donors. The most upregulated cytokine was CXCL13 with a log2 fold-change (FC) of 1.7 (p<0.0001). The chemokines CCL21 (FC: 1.3, p<0.0001) and CCL23 (FC: 0.87, p<0.0001) were also noted among the top 10 most upregulated cytokines, consistent with the earlier plasma proteomic study. Of note, IL-6 (FC: 0.35, p=0.039) was also found, but it ranked 31 out of 54 in log2 FC magnitude. We next sought to compare cytokine elevation in iMCD to related disorders. Hierarchical clustering of all 159 cytokines appeared to differentiate iMCD from RA, HL, and HHV8+MCD (Figure 1), revealing a cluster with 72/88 (82%) iMCD and 4/60 (6%) related disease patients versus another with 16/88 (18%) iMCD and 56/60 (93%) related disease patients. Given this, we used linear models to test for significant differences in protein expression between iMCD and related diseases. We identified 12 cytokines that were significantly different between iMCD and each comparator disease (Table 1). Of these, 10 cytokines all trended in the positive direction in iMCD versus each comparator disease. CCL21 was again noted among this group and had the highest average FC for all three groups.

Herein we validate earlier findings that cytokines, particularly chemokines are significantly upregulated in iMCD. While previous results compared disease flare to disease remission in a small pilot cohort, our patient sample is >10 times larger, represents a broader spectrum of disease severity, and is compared to a set of healthy donors and related diseases. Unbiased hierarchical clustering was able to separate iMCD from other diseases, and linear models identified specific cytokines that are significantly different in iMCD compared to each RA, HL, and HHV8+MCD. Further validation is need to assess whether a cytokine panel can differentiate iMCD from other related diseases, which would be crucial for timely diagnosis and treatment. Of note, CXCL13 and CCL21 are primarily produced by follicular dendritic cells and fibroblastic reticular cells, stromal cells responsible for coordinating B cell and T cell trafficking in the lymph node, respectively. Dysregulation of these cells may contribute to the dysmorphic appearance of lymph nodes and pathogenesis in iMCD. 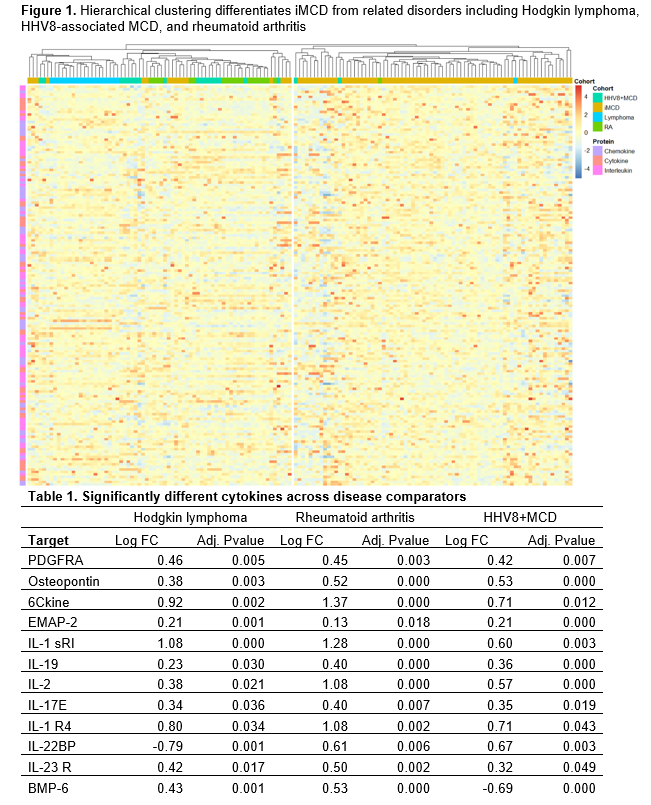