Castleman disease (CD) describes a group of heterogeneous lymphoproliferative disorders with characteristic histopathology that are classified based on the number of enlarged lymph node (LN) stations, etiological drivers, and clinical phenotype. CD histopathology includes a broad spectrum from plasmacytic to hyaline/hyper vascular with a mixed pattern in between. Unicentric CD (UCD) involves a single enlarged LN station and mild symptoms, whereas multicentric CD (MCD) involves multiple stations of enlarged LNs and more severe symptoms. MCD is subclassifed into Human Herpesvirus-8 associated MCD, POEMS-associated MCD, and idiopathic MCD (iMCD). iMCD cases are further subdivided into thrombocytopenia, anasarca, fever/elevated C-reactive protein (CRP), renal dysfunction, organomegaly (TAFRO) or iMCD-not otherwise specified (NOS), who often have thrombocytosis and hypergammaglobulinemia. Recently, it has been reported that some iMCD patients can have more oligocentric lymphadenopathy (above or below the diaphragm) whereas others have generalized lymphadenopathy (above and below the diaphragm). Given the heterogeneity across CD, we leveraged data from a longitudinal natural history study of CD to characterize the spectrum of CD. Specifically, we set out to determine if patients with multicentric lymphadenopathy localized to above or below the diaphragm (oligocentric CD, OCD) appeared to be more similar to UCD or iMCD with more generalized lymphadenopathy.

In total, 130 patients enrolled in an international CD registry were confirmed to have CD by a panel of experts. Patients were assigned UCD, OCD, or iMCD per the following: UCD, 1 station of enlarged LNs (N=32); OCD, ≥2 stations of enlarged LNs, either above or below the diaphragm (N=29); iMCD, ≥2 stations of enlarged LNs, both above and below the diaphragm (N=69). Clinical data is provided closest to date of diagnosis +/-90 days. Sustained response is defined as ≥50% symptom improvement sustained without the addition of subsequent drug treatments. When appropriate, statistical testing was performed by Chi-square, Fisher’s exact, or two-tailed T test.

Among the 69 iMCD patients, 42 (61%) were classified as TAFRO and 27 (39%) were NOS. In contrast, only 1 of 29 OCD patients (3%) was TAFRO and 28 (97%) were NOS. No UCD patients were TAFRO. Breakdown of histopathological subtype can be found in Table 1. There was a mean (SD) of 8.4 (3.7) enlarged LNs in iMCD at diagnosis, compared with 2.8 (1.4) in OCD and 1 (0) in UCD. While enlarged LNs in the abdomen/pelvis region occurred in 56% of UCD, only 19% of OCD patients demonstrated lymphadenopathy in this region. Clinically, OCD patients demonstrated symptoms and laboratory abnormalities more comparable to UCD than iMCD (Table 2). In fact, there was no difference in symptoms between UCD and OCD groups, while there were significantly more symptoms in iMCD than OCD. iMCD had significantly worse anemia, albumin, creatinine, CRP, and other markers of inflammation than OCD, whereas OCD patients had significantly increased CRP (p=0.03) and alkaline phosphatase (p=0.03) compared to UCD. IgM was greater in OCD than both UCD (p=0.02) and iMCD (p=0.01) (Table 2). The number of patients receiving drug treatments differed by subtype: 7 UCD (22%), 18 OCD (62%), and 67 iMCD (97%). Fifty-five patients (UCD: 1, OCD: 7, iMCD: 47) received anti-IL-6 therapy (+/- steroids), including the only FDA-approved drug, siltuximab. Sustained response to anti-IL-6 (+/- steroids) was observed in 23/47 (49%) iMCD, 3/7 (43%) OCD, and 0/1 UCD. Within iMCD clinical subgroups, response was observed in 12/27 (44%) iMCD-TAFRO and 11/20 (55%) iMCD-NOS as well as across the histopathogical subtypes, suggesting that anti-IL-6 therapy can be effective across the spectrum.

Overall, this study highlights the heterogeneity of CD. Importantly, it uncovers a group of CD patients that meet diagnostic criteria for iMCD but their lymphadenopathy is confined to above or below the diaphragm and they appear to behave more similarly to UCD. Given that 1/3 of OCD patients were managed without drug treatment, further work is needed to determine the relative benefits of UCD-like surgical treatment versus iMCD-like drug-based therapy for OCD. The clinical subtype of TAFRO, which was present in more than half of the iMCD patients, was observed in only one OCD case and no UCD cases. Further work is needed to determine optimal treatments across these subgroups. 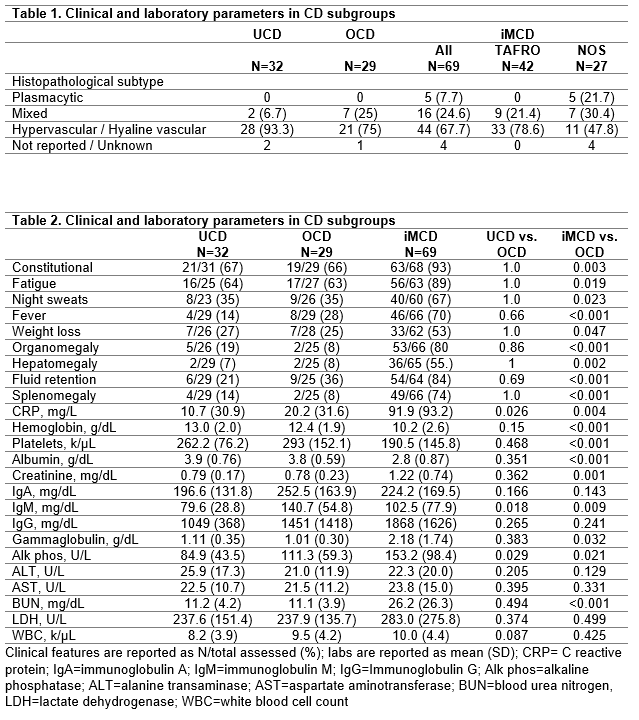