468 Safety and Tolerability of Cael-101 in Combination with Anti-Plasma Cell Dyscrasia Therapy in Patients with AL Amyloidosis: 1-Year Results from an Open-Label Phase 2 Trial

Most patients receive anti-PCD therapy as standard of care (SOC) to suppress plasma cell proliferation and arrest the generation and deposition of new amyloid fibrils. At present, no approved therapies exist that target fibrils already deposited.

CAEL-101, a monoclonal antibody, binds to amyloid light chain fibrils and promotes removal from tissues. In this Phase 2 trial, patients were treated with doses up to 1000 mg/m2, combined with SOC, demonstrating this dose was well tolerated and appropriate for Phase 3.

Addition of daratumumab (n = 12) to the anti-PCD combination treatment of cyclophosphamide-bortezomib-dexamethasone (CyBorD) did not alter the pharmacokinetic or tolerability profile of CAEL-101.

Of the 19 current cardiac evaluable patients (baseline NT-proBNP ≥332 ng/L and ≥1 post-first-dose NT-proBNP value), 15 (78.9%) have responded (≥ 30% NT-proBNP decrease from baseline) or are stable on CAEL-101 therapy. Renal evaluable patients, as determined by Investigator at a single site, showed a similar proteinuria response.

Discussion:
This ongoing trial is evaluating the long-term safety and tolerability of CAEL-101 administered with anti-PCD SOC as a treatment to reduce amyloid burden in patients with cardiac AL amyloidosis. CAEL-101 was well tolerated when administered with anti-PCD therapy. Most TEAEs observed were mild to moderate in severity and did not require intervention. There were no meaningful differences in tolerability or exposure to CAEL-101 when daratumumab was added to the anti-PCD regimen. Improvements in cardiac and renal response biomarkers were observed in most patients presenting with cardiac or renal involvement, respectively, at study entry.

Conclusion:
After approximately 1-year, CAEL-101, as part of an AL amyloidosis treatment strategy, demonstrates to be well tolerated. This updated report confirms previous findings for the use of CAEL-101 in combination with anti-PCD. A Phase 3 clinical program is ongoing to further elucidate the efficacy and safety of CAEL-101. 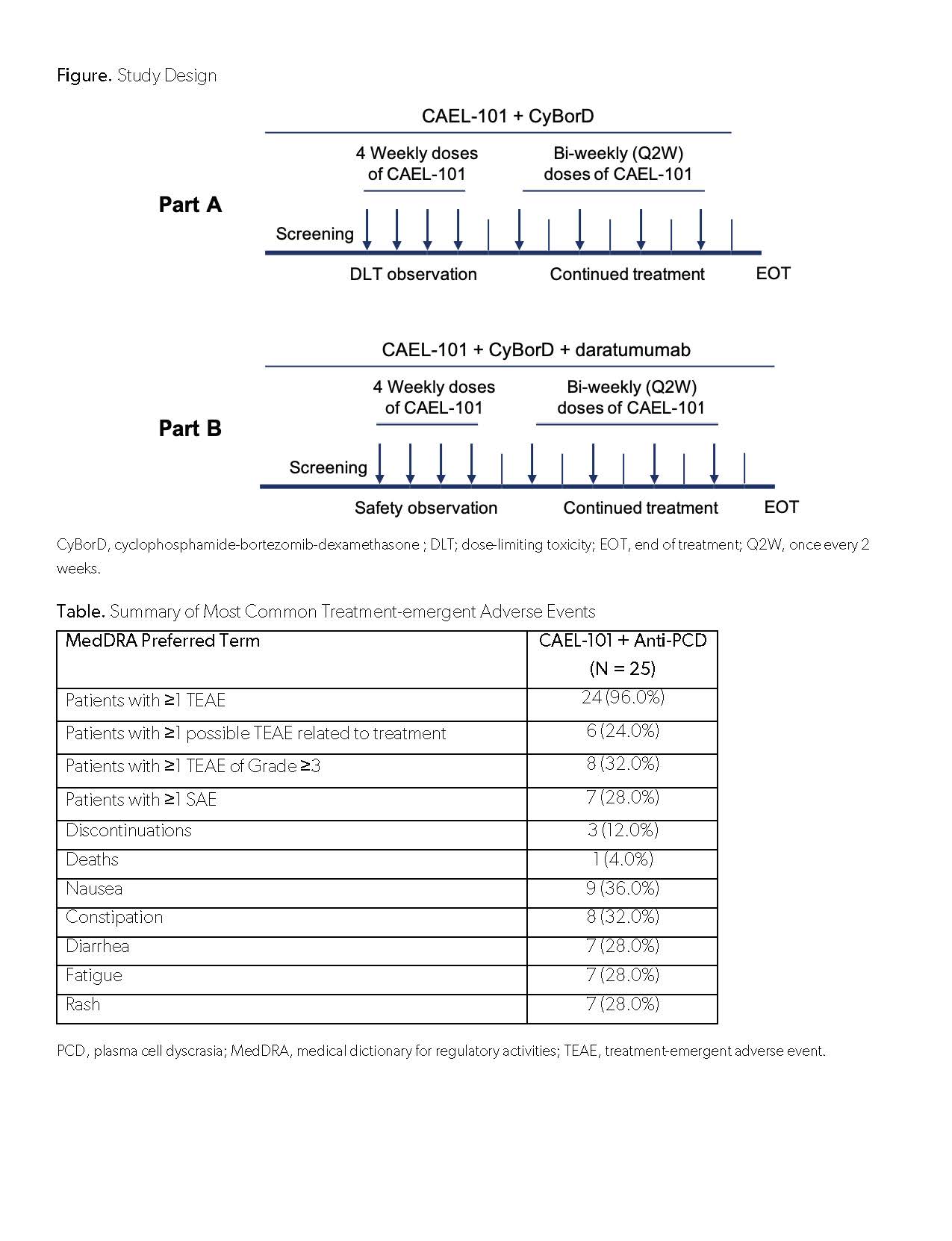