Background: Relapsed or refractory (R/R) acute lymphoblastic leukemia (ALL) or lymphoblastic lymphoma (LL) remain a therapeutic challenge, especially in elderly patients(pts) or those with T-cell immunophenotype. Inhibition of apoptosis is an increasingly recognized mechanism for resistance to conventional chemotherapy. Recently, the oral bcl-2 inhibitor venetoclax (VEN) has shown remarkable activity in a variety of hematologic malignancies. Preclinical data in both B- and T-ALL suggests synergy of VEN with vincristine(VCR). Liposomal VCR (L-VCR) is FDA approved for relapsed ALL having progressed following 2 or more antileukemia therapies. We designed a phase I/II trial (EA9152) of the combination of L-VCR and VEN for pts with r/r B-or T-cell ALL or LL. Here, we report for the first time the safety and efficacy outcomes of the phase I portion of this trial (NCT03504644).

Results: EA9152 was activated on April 26, 2018 and the phase I portion closed to accrual on March 2, 2021. Among the 18 pts in dose escalation (Table 1), the median age was 42 years (22-77). The majority of pts were male (56%), white (80%), and with a performance status (PS) of 1 (78%). Among 13 pts with disease diagnosis reported, 9 had ALL and 4 had LL. Seventeen of 18 (94%) reported previous chemotherapy, two of which had previous stem cell transplant. Median treatment cycles received is 1 (range 1-11). One patient, having received 11 cycles, remains on study at the time of data analysis. Grade >=3 treatment-related adverse events were reported in 89% of treated pts, with neutrophil count decreased (67%), white blood cell decreased (56%), and anemia (50%) as the most common. One pt experienced grade 3 tumor lysis syndrome. Twelve pts were considered evaluable for MTD determination. Six pts were considered not evaluable for toxicity analysis on account of withdraw of consent for treatment (n=4) or rapid disease progression (n=2). Two pts (2 of 3) at dose level 3 experienced DLTs, one each of hypokalemia and heart failure. Therefore, the MTD of the combination was determined to be dose level 2 - VEN 50, 100, 200, 400 mg on days 1, 2, 3, 4 and 600 mg on days 5 ‒ 42 and for subsequent cycles, with L-VCR 2.25mg/m2 IV weekly. In regards to best overall responses observed (Table 2) 4 of 18 pts (22%) achieved complete response (CR), 4 patients (22%) had stable disease, and 7 (39%) had progressive disease. Two patients in CR were found to be measurable residual disease (MRD) negative as well.

Conclusions: In the phase 1 portion of this study, the combination of VEN and L-VCR was found to be safe for patients with ALL and LL. The MTD of the combination was found to be VEN 600mg daily with encouraging preliminary efficacy seen including MRD negative responses. The phase 2 portion of this trial is actively enrolling with VEN 600mg daily starting C1D1. 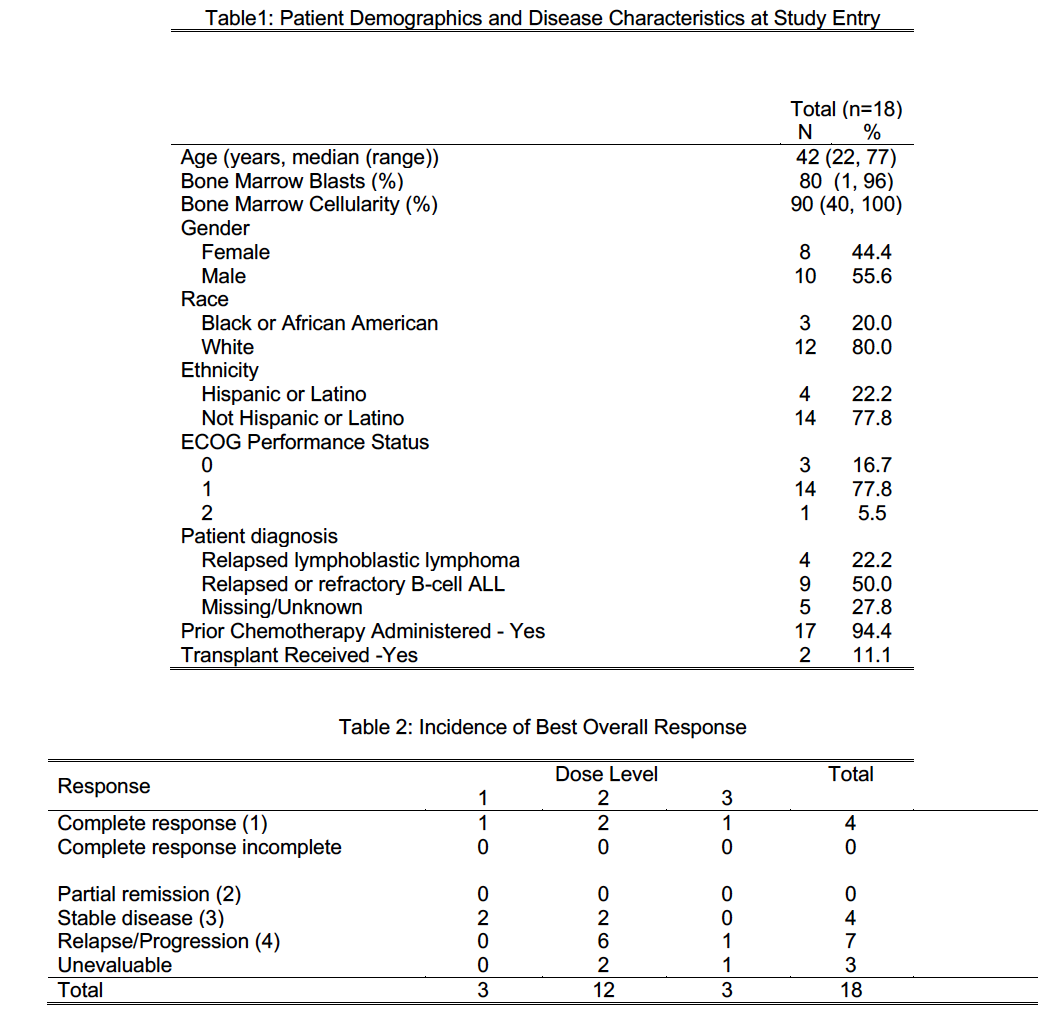 OffLabel Disclosure: Venetoclax, a BCL-2 inihibitor, is not FDA-approved for use in ALL.