Patients with hematologic malignancy have a higher risk of death from COVID-19 compared to the general population. A blunted immune response from both the underlying disease and applied treatment may contribute to development of more severe forms of COVID-19, absence of seroconversion, prolonged viral shedding, and might also impair humoral vaccine response. Factors influencing efficacy of SARS-CoV-2 vaccines in this patient population are still insufficiently explored.

A qualitative assay against SARS-CoV-2 nucleocapsid antigen was used to detect prior infection; these patients (n=23) were excluded from the final analysis. Humoral response following vaccination was monitored using serological immunoassay registered for quantitative measurement of serum anti-SARS-CoV-2 RDB-spike protein antibodies. Both electrochemiluminescent assays performed by Cobas e801 analyzer (Roche Diagnostics, Mannheim, Germany) detect total antibodies (including IgG). Response was recorded after the first and second doses. A positive response was defined as > 0.8 U/mL. Upper and lower limits of quantification were 0,4 U/mL and 250 U/mL respectively.

Inter-group comparisons were performed with Mann-Whitney U, χ2, or Fisher’s exact test as appropriate. ROC curve analysis was used to find optimized cut-off values of numerical variables regarding response to the second dose. P values <0.05 were considered statistically significant. MedCalc statistical software v 20.008 was used for all analyses.

We evaluated a total of 120 patients who received at least one dose. Patient characteristics are summarized in Table 1. The majority received the Pfizer-BioNTech vaccine (66.7%), followed by Oxford-AstraZeneca (24.2%) and Moderna (9.2%).

Data on humoral response after the first dose was available in 66 patients, among whom 20 (33%) achieved response with median specific IgG levels 6.1 U/mL. Response after the second dose was available in 90 patients; 58 (64.4%) achieved response with median specific IgG levels 250 U/mL. The second dose significantly improved response both in terms of achieved response (P=0.031) and specific IgG levels (P<0.001). There were no significant differences in response or specific IgG levels regarding the type of the vaccine (P>0.05). Lower response rates after the second dose were achieved in patients aged >67 years (P<0.001; response in 32.4% vs. 83.9%), with specific diagnosis (P=0.002, driven by response in patients with non-Hodgkin’s lymphoma (NHL; response in 29.2% NHL vs. 77.3% non-NHL) and chronic myeloid leukemia (CML; 100% response in CML vs. 61.4% non-CML)), those receiving active treatment (50% vs. 88%; P<0.001), no prior hematopoietic stem cell transplantation (HSCT; 51% vs. 93%; P<0.001) and prior anti-CD20 mAbs therapy (4% vs. 85%; P<0.001). Corticosteroid therapy (>120 mg prednisone equivalent dose) did not influence the response significantly (response in 88.9% vs. 42.1%; P=0.056), and neither did steroid type. Four (3,3%) patients tested positive for SARS-CoV-2 after vaccination, 2 of which had no humoral response, and 2 had received only one dose. Three patients required in-hospital treatment and oxygen supplementation.

Patients with hematologic diseases have lower serological response rates to SARS-CoV-2 vaccines than those previously reported in clinical trials. Our results also suggest they benefit from receiving both doses with no significant difference between vaccine types. Those in active treatment, no prior HSCT, diagnosed with NHL, and receiving anti-CD20 mAb seem more likely to be seronegative after receiving both doses. However, the present study did not examine potential confounding effects between these factors and these findings should be elaborated further in larger patient cohorts. 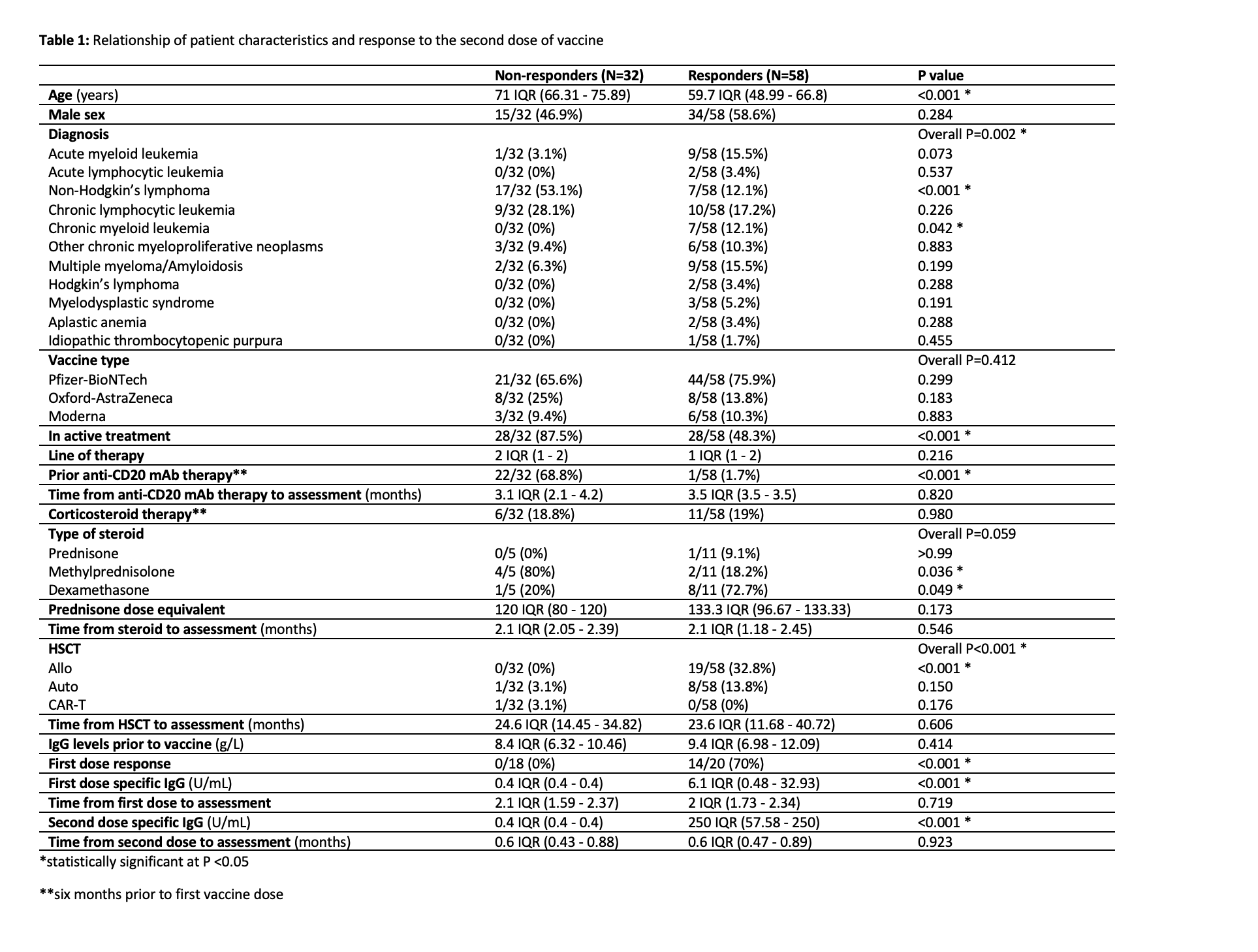