Idiopathic multicentric Castleman disease (iMCD) is a rare, life-threatening hematologic disorder involving multi-organ dysfunction driven by inflammatory cytokines, often including interleukin-6 (IL-6). The five-year overall survival rate varies considerably between cohorts, ranging from 50 to 77%. It is not well understood why administration of therapies such as the anti-IL-6 monoclonal antibody siltuximab induces complete and durable remission in some patients, whereas others succumb to their disease despite therapy. The aim of this study was to identify laboratory parameters associated with mortality in iMCD. To this end, iMCD patients enrolled in the ACCELERATE registry with fatal and non-fatal outcomes were compared.

To determine differences in the laboratory profiles at time of diagnosis between the non-fatal (control) (n = 66) and fatal (mortality) (n = 6) iMCD groups, we performed two-tailed t-tests with Welch correction. P < 0.05 was considered significant. Due to the exploratory nature of this study and limited sample size, we did not perform correction for multiple comparisons among the 25 parameters assessed.

In the fatal iMCD group, all patients were white, aged 15–66, and 33.3% were male. Four patients had a hypervascular histopathological subtype; one subtype was not stated, and one was mixed. The non-fatal iMCD group was mixed race and included 57.6% male patients; 38 patients had a hypervascular subtype, 19 had a mixed subtype, five patients had a plasmacytic subtype, three were not stated and one had a hyaline vascular subtype. The mean time from final diagnosis to death was 586.2 days (range: 16–2952 days). Around the time of diagnosis, immunoglobulin M (IgM) (Figure 1A), international normalized ratio (INR) (Figure 1B), and platelet count (PC) (Figure 1C) were significantly decreased in the fatal group compared with the non-fatal group (Figure 1D), with three mortality patients below the lower limit of normal (LLN) for IgM, and four mortality patients below the LLN for PC. Unlike the other two parameters, the INR levels were closer to normal in the fatal group than the non-fatal group. While C-reactive protein (CRP) levels were higher and hemoglobin (Hb) levels were lower in the mortality group, they did not surpass the significance threshold.

These data provide new insights into differences between patients who have fatal and non-fatal outcomes. These preliminary findings from a small cohort of deceased patients demonstrate that patients with iMCD who have fatal outcomes may differ from those who do not. For instance, patients in the fatal group may be in a state of greater immune dysregulation (indicated by a lower IgM) and at increased risk of bleeding events (lower PC), compared with patients who go on to survive. The lower PC in the fatal group is likely reflective of patients with the recently-defined thrombocytopenia, anasarca, fever/elevated CRP, reticulin fibrosis/renal dysfunction, organomegaly (TAFRO) clinical subtype of iMCD having lower platelets and a more aggressive course. Thus, early evaluation of platelet count may be an early and actionable indicator of someone’s likelihood of death. Additional research is needed into the role of PC and markers of inflammation and anemia in predicting mortality as well as the timing of decline of these markers. If validated in a larger cohort, certain laboratory values may be of use to identify patients at increased risk of death. 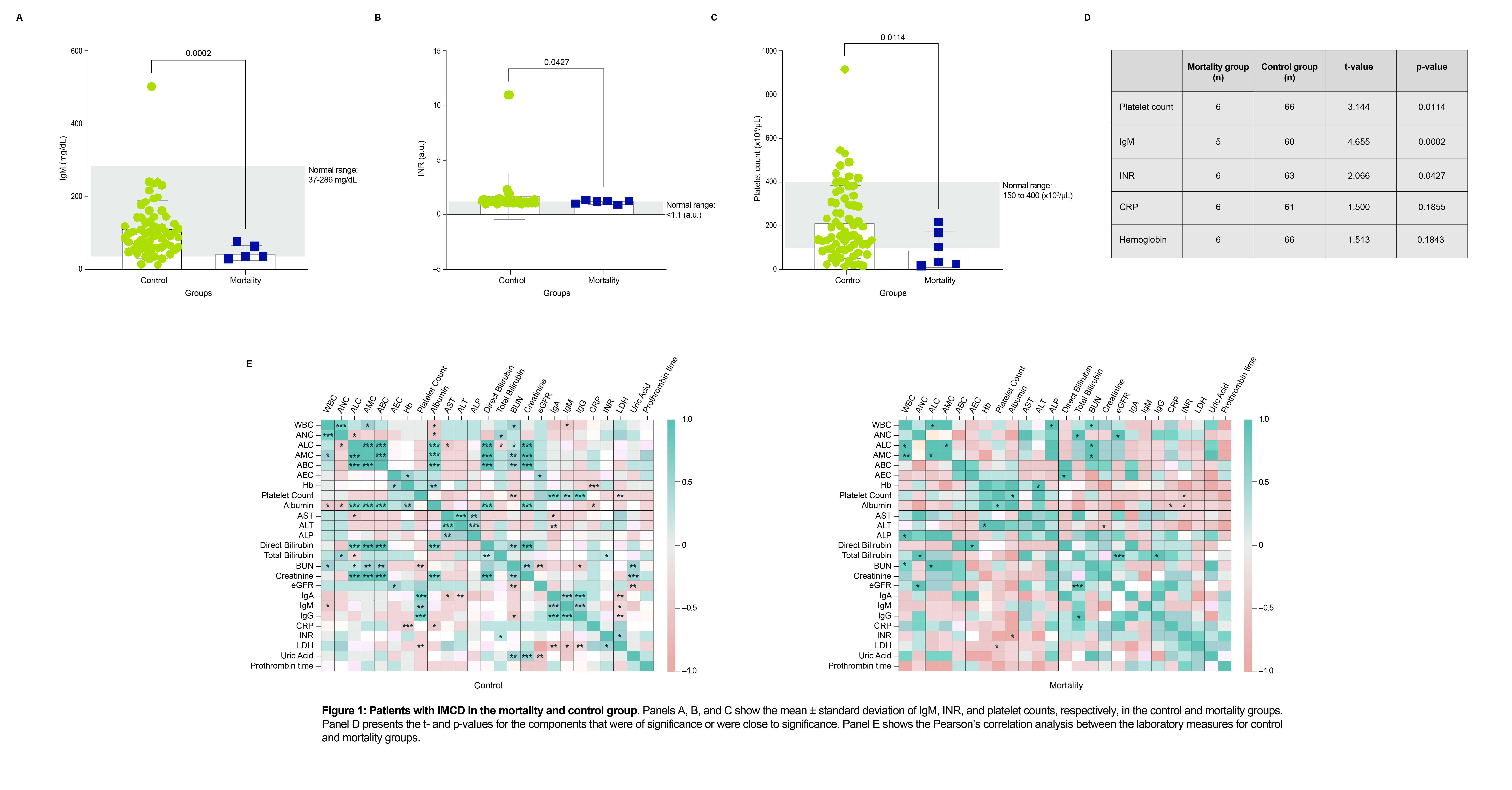