Introduction: Chimeric antigen receptor (CAR) T-cells redirected against CD19 have demonstrated remarkable clinical activity in children and adults with relapsed/refractory (r/r) B-cell malignancies. The risk of lineage switch (LS) following CD19-directed therapies has been well documented but has been primarily limited to case reports. Additionally, the risk of subsequent malignant neoplasms (SMN) following CAR T-cells has not yet been described. Distinguishing LS (B-ALL to myeloid malignancy) from a therapy-related myeloid neoplasm is both clinically and biologically relevant. The former emerges from a highly refractory leukemic clone, likely resistant to salvage therapy, whereas the latter represents a new malignancy that can be associated with long-term survival.

Methods: We conducted a multicenter, retrospective review of children and young adults with r/r B-acute lymphoblastic leukemia (B-ALL) who received either commercial tisagenlecleucel or 1 of 3 investigational murine-based CD19-CAR constructs on clinical trials at 7 US centers between 2012-2019. Patients diagnosed with B-ALL before age 25 years were included and patients who had received any prior CAR product were excluded.

KMT2Ar rearrangement (KMT2Ar) was a predominant cytogenetic abnormality seen in patients with LS. Overall, 38 of 420 patients (9%) had a KMT2Ar. KMT2Ar was present in 9 of 12 (75%) patients with LS compared to 20 of 408 (7.1%) non-LS patients (p<0.001). Patients with LS were younger at initial diagnosis compared to the remaining cohort (median age, 1.6 years vs. 7.7 years; p=0.001), reflecting the inherent association between KMT2Ar and infant ALL. Otherwise, there were no significant differences in gender, prior hematopoietic stem cell transplant (HSCT), prior blinatumomab exposure, or CAR response.

The 6 SMNs were cholangiocarcinoma, synovial sarcoma, malignant melanoma and 3 therapy-related myeloid neoplasms (MDS/AML), distinguished from LS based on loss of original cytogenetics. Notably, 4/6 (67%) patients that developed a SMN had received an allogeneic HSCT prior to development of SMN. Four patients (67%) remain alive and in remission with a median follow-up of 304 days after diagnosis of SMN, including 2 patients with MDS/AML.

Conclusions: In the largest series of pediatric patients treated with CAR T-cell therapy, we show that LS occurs in 2.9% of children. The presence of a KMT2Ar was the biggest risk factor, with 23.7% of these patients experiencing LS. We found that LS can occur very early in a patient’s post CAR T-cell course, and despite a variety of treatment approaches, the outcomes for these patients are dismal. Given the predisposition to LS, the role for consolidative HSCT in KMT2Ar patients warrants further study. Limited by a short follow-up period, we saw SMNs in only 1.4% of our patients. Causality is unknown and likely unrelated to CAR-T, but this further supports the long-term safety of CAR T-cells in children with B-ALL. 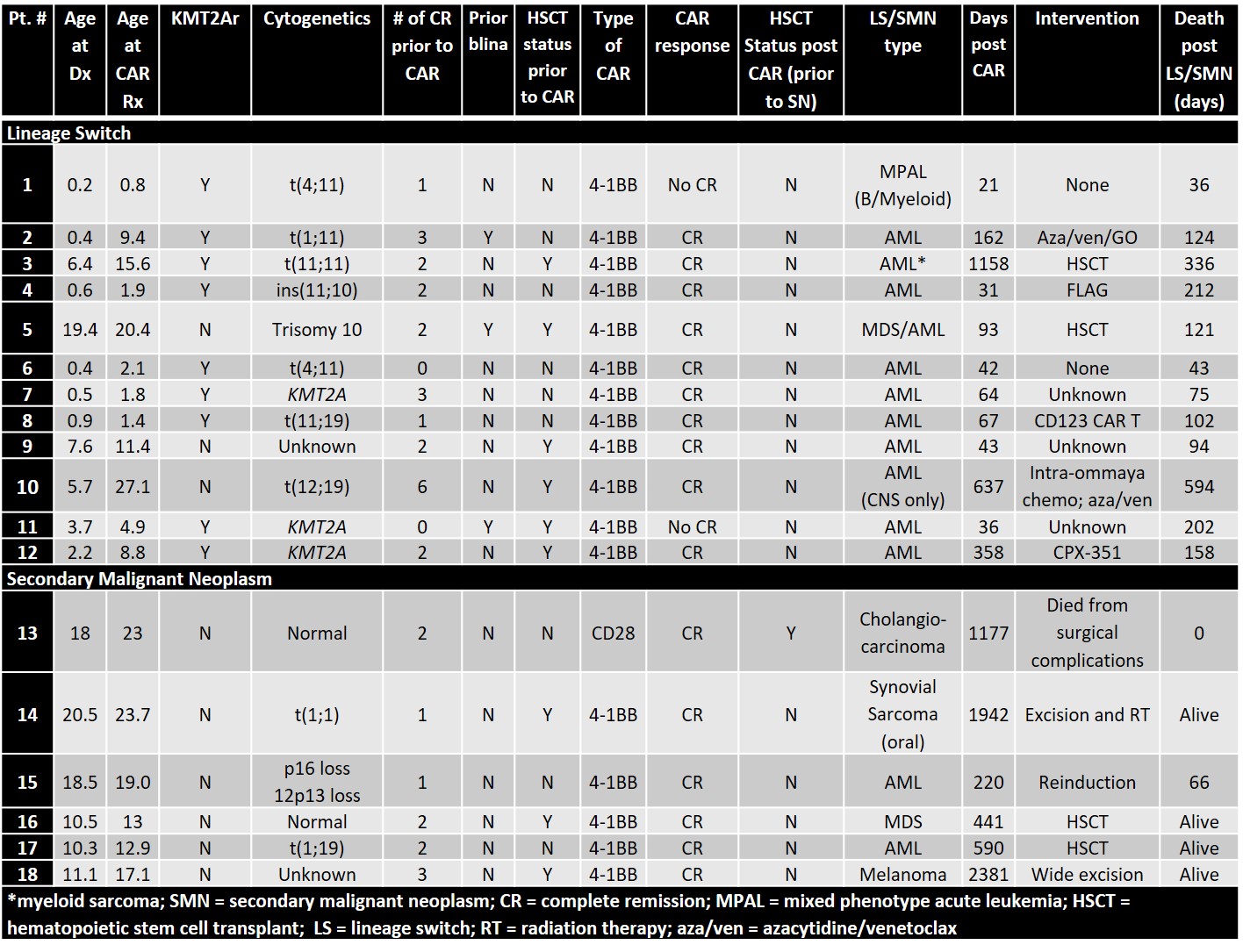