Chronic graft-versus-host disease (cGVHD) is the leading cause of late morbidity and mortality after allogeneic hematopoietic cell transplantation (HCT) and is associated with poor quality of life (QoL) and functional status among long-term HCT survivors. Disability is defined as any physical or mental impairment that limits a person’s ability to do certain activities or interact with their environment. There are limited data regarding the association of cGVHD and disability. The aim of this study is to define disability and further understand contributing factors in patients with cGVHD.

The Living With cGVHD Patient Survey was a cross-sectional online survey administered from May to August 2020 to US adult patients who reported a cGVHD diagnosis within the previous 5 years. Participants were recruited through patient advocacy groups and online patient panels. Respondents reported demographics, disease diagnosis, work status, cGVHD symptoms per Lee Symptom Scale (LSS), and impact on activities of daily living. Descriptive and correlational analyses were used to inform 3 composite definitions of disability: (1) severe cognitive disability (any report of severe limitation [>7 on a 0–10 scale] concerning managing personal finances, social interaction, or computer use); (2) severe physical disability (any report of severe limitation concerning personal hygiene; dressing; eating; or ability to use the restroom, move around the house, prepare meals, shop, do housework, or get around outside the home); and (3) work disability (any report of taking disability leave or leaving a job because of cGVHD).

Out of 165 total survey respondents, 28 reported being retired, self-employed, or a homemaker and were excluded from the analysis as they were not considered part of the potentially employable general workforce (N=137). There were no demographic or cGVHD differences between respondents included in the study cohort vs those who were excluded.

Nearly half of respondents (47%) reported severe cognitive limitations in at least 1 of the activities of the composite score (Figure 1). Univariable analyses demonstrated that cGVHD severity/duration (P=0.0056); LSS eye (P=0.0266), mouth (P=0.0132), lung (P=0.0002), skin, nutrition, energy, and psychological symptoms (P<0.0001 for all); and number of treatments (P=0.0210) and specialists seen (P=0.0030) were all associated with self-reported severe cognitive disability. Skin and psychological symptoms and number of specialists seen remained significant in a multivariable analysis (Table 1).

A substantial proportion of survey respondents reported severe cognitive and physical disability, as well as work-related disability, associated with cGVHD, highlighting the importance of defining and better understanding cGVHD-associated disability. Additional investigations of the impact of work type, sex and racial disparities, and specific cGVHD symptoms are needed to further understand this relationship and improve the overall health-related QoL of long-term HCT survivors. 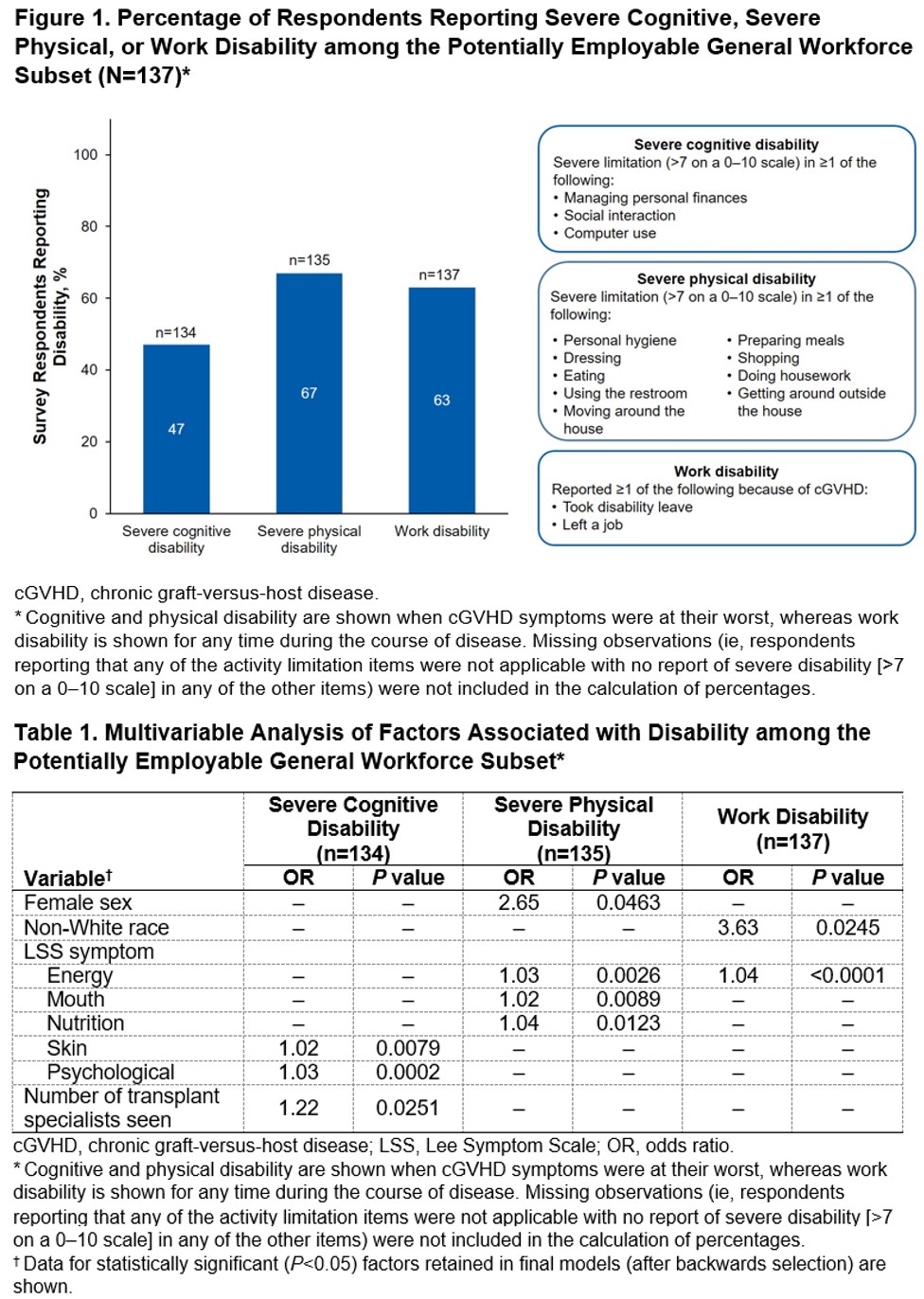