Diffuse large B-cell lymphoma (DLBCL) is the most common subtype of Non-Hodgkin Lymphoma, with approximately 25-30% of patients presenting as early or limited-stage (stage I and II). Though treatment with chemoimmunotherapy is standard of care, the role of consolidative radiotherapy (RT) in limited-stage (LS) patients is not well defined. Recent studies have attempted to shorten chemotherapy courses and eliminate RT for LS patients. Additionally, recent single institutional data has suggested LS patients with extranodal (EN) disease may have better outcomes if treated with RT. We aimed to investigate whether the addition of RT provided a survival benefit in early-stage DLBCL patients based on primary site at presentation comparing nodal to EN disease.

Methods
The National Cancer Database was utilized to identify patients diagnosed with LS-DLBCL from 2004 to 2015. Only patients treated with multiagent chemotherapy were included. Patients with international prognostic index (IPI) score available were separated into low (0-1 factors) or high-risk (2-4) groups. Landmark analysis was performed to exclude patients with last contact, including death, within 12 months of diagnosis. Kaplan-Meier survival analysis was used to compare overall survival (OS). Cox regression analysis was used to identify hazard ratios for survival using RT between subgroups.

Conclusions
We report the largest retrospective study on EN outcomes utilizing consolidative RT in early-stage DLBCL. Though there is no consensus on optimal treatment indications for RT in LS-DLBCL, this data shows improved OS in both nodal only disease and within specific EN disease subgroups when RT is added to front-line chemotherapy. As recent studies have attempted to shorten chemotherapy cycles and limit the use of RT, these results suggest caution against omission of RT in select patients. 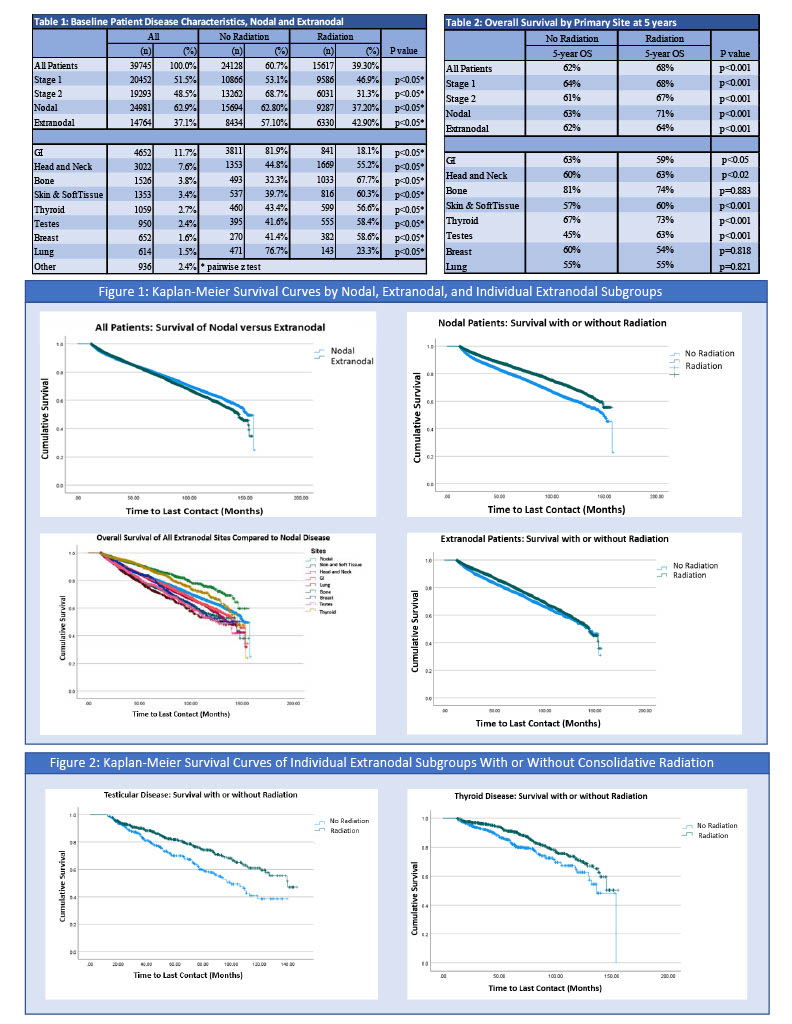