Background: The curative potential of allogeneic transplant (alloHCT) in patients with acute lymphoblastic leukemia (ALL) is hampered by relapse; the major cause of treatment failure. Risk factors for relapse include measurable residual disease (MRD) before or after alloHCT, transplantation in second complete remission (CR) or beyond, and reduced intensity conditioning (RIC) regimens. In ALL patients, relapse rates range from 30% to 50%, with most relapses occurring within the first year after alloHCT. After relapse, options for disease control are limited, and consequently overall survival is poor. Post-alloHCT maintenance may reduce MRD, provide time for graft-versus-leukemia to develop, and ultimately decrease relapse rates and prolong leukemia-free-survival.

Inotuzumab ozogamicin (INO) is an anti-CD22 monoclonal antibody bound to calicheamicin which has significant activity against relapsed ALL. INO gained regulatory approval for the treatment of relapsed/refractory ALL based on a randomized phase 3 trial that showed an overall CR rate of 81% in the INO arm as compared to 29% in the standard arm. With the hypothesis that low-dose INO will be safe and will reduce the relapse rates, we are conducting a phase I/II study using this approach as post-alloHCT maintenance therapy.

Methods: Eligibility included patients aged 16-75 who have undergone alloHCT for CD22+ALL in complete remission, have a high risk for relapse after alloHCT (MRD before or after alloHCT, transplantation, in second complete remission (CR) or beyond, reduced intensity conditioning (RIC) regimen used, lymphoid blast crisis of chronic myeloid leukemia, or Ph-like ALL), have adequate graft and organ function, are between day 40 and 100 post-alloHCT, do not have active grade III/IV GVHD or any active GVHD of the liver, and have no history of VOD. The primary objective of this phase I clinical trial is to define a post-alloHCT maximum tolerated dose (MTD) of INO. Secondary objectives include describing the safety profile of INO post-alloHCT, determining the rate of veno-occlusive disease in this setting, evaluating non-relapse mortality (NRM), disease free survival (DFS) and overall survival (OS) at 1 year post-alloHCT and 1 year post-last dose INO, determining the incidence of myeloid toxicity and secondary graft failure, and determining if INO at these doses are effective at eradicating MRD in this cohort of patients.

Pre-treatment tests include a bone marrow biopsy and aspirate to assess disease state and MRD. The trial design is a 3+3 model. The study treatment consists of a total of four 28-day cycles of INO starting at dose level 0 (0.3mg/m2) given on day 1. The first cycle must be initiated between day 40 and 100 after alloHCT. Dose limiting toxicities (DLT) include VOD, prolonged cytopenia (more than 28 days), and death. If there are no DLTs experienced in a cohort, patients are enrolled in the next highest dose level (Table 1). Patients are monitored with routine blood work during each cycle. At 1 year after alloHCT, patients are assessed by restaging bone marrow biopsy and aspirate. Patients are followed up to 12 months after the last dose of INO.

Interim Analysis: As of July 27th, 2021, 17 patients have been treated with a median number of 3 cycles completed. Two patients went off treatment after 1 cycle of INO (patient choice, DLT(prolong thrombocytopenia)), two after 2 cycles due to cytopenia, and three went off treatment after 3 cycles of INO (patient choice (1), physician choice (2)). All continued to be followed for safety. We have completed 1-year post-alloHCT follow up on twelve patients. Eleven out of twelve patients were alive and in CR at 12 months from last dose of INO. One patient out of twelve died of recurrent disease at 12 months following last dose of INO. No patients experienced VOD. Significant side effects included thrombocytopenia and neutropenia. The percentage of any aGVHD is 59% and 0% grade III/IV aGVHD. The percentage of any cGVHD is 18%. Patient characteristics are described in Table 2.

Conclusions: In the phase 1 portion of this study, INO at doses of 0.3, 0.4, 0.5 and 0.6mg/m2 was well tolerated. Thrombocytopenia may be the dose-limiting toxicity. The low observed rate of relapse, along with the safety profile, investigation of low-dose INO as maintenance therapy after alloHCT will be continued in a phase II trial. 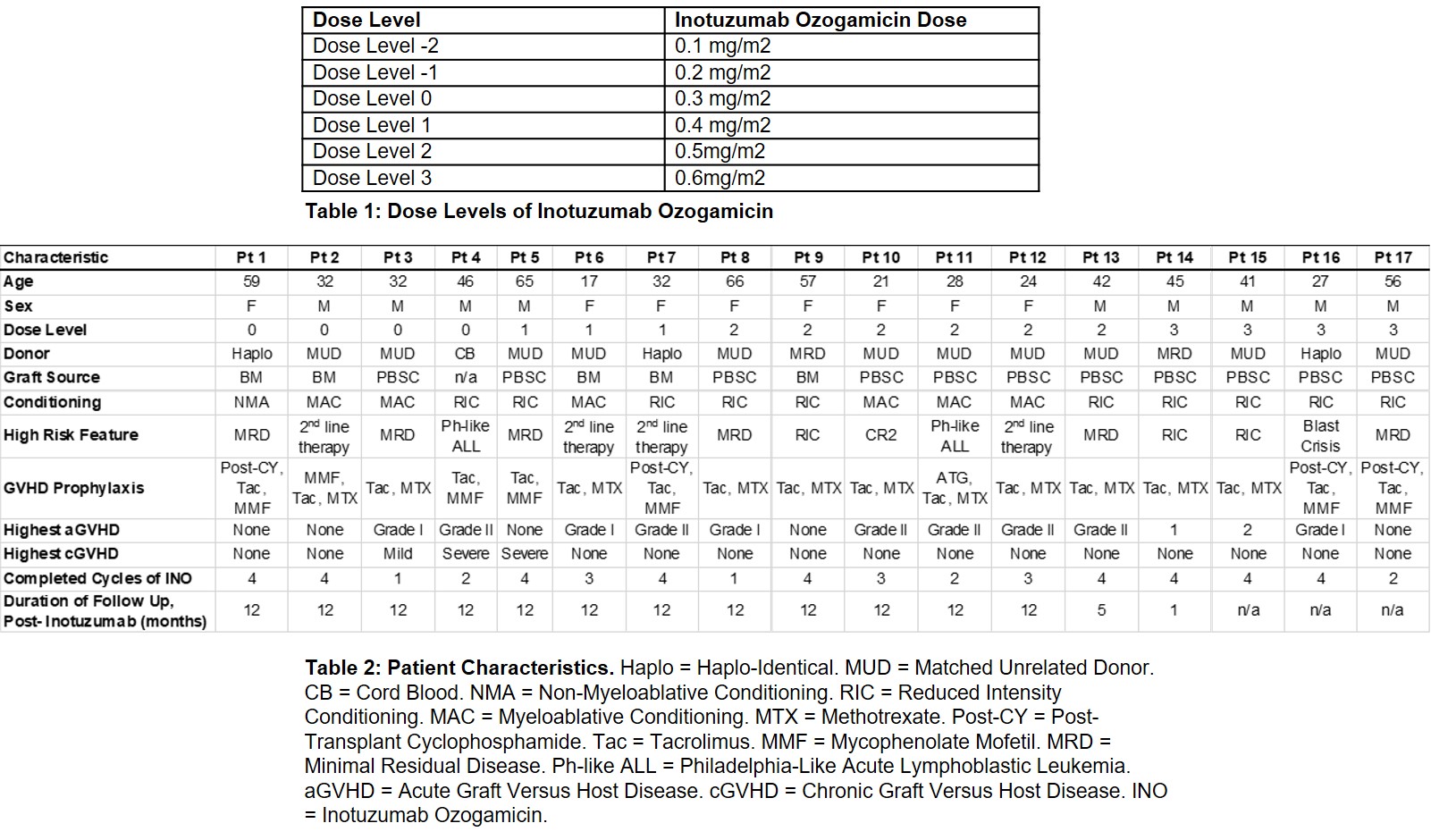 OffLabel Disclosure: Post- allogeneic transplant maintenance of inotuzumab for patients with ALL